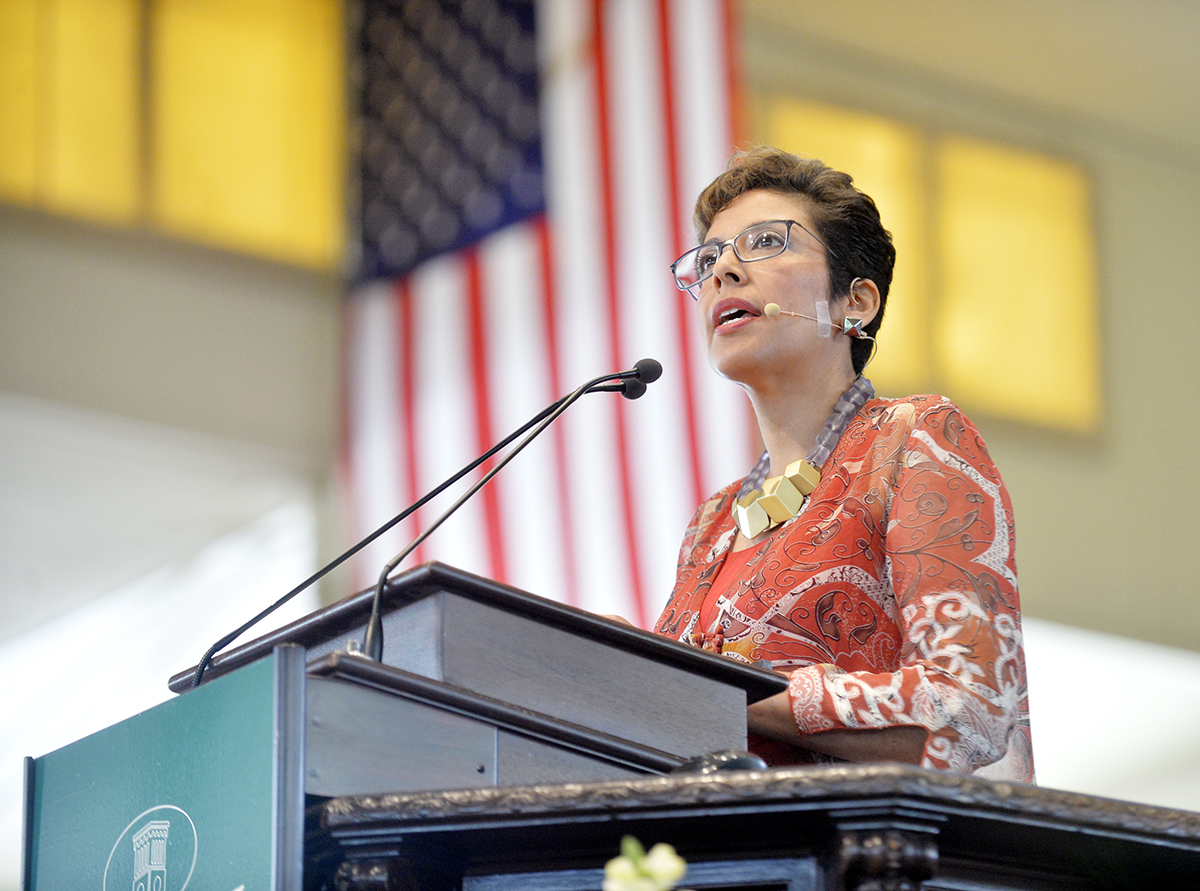 Anna Maria Chávez carries a letter with her every day to remind her she defied the odds. She received the letter March 2, 2012, not long after taking office as the CEO of Girl Scouts of the United States of America.

Chávez picked up the letter, kept it in a protective plastic sleeve and read it aloud to the audience: “As bad as it is that you [Mexicans] litter our country, it is literally sickening that you have anything to do with Girl Scouts. America’s best days are behind her due to you.”

During the 10:45 a.m. Friday morning lecture in the Amphitheater, Chávez ended the weeklong conversation on “Moral Leadership in Action” by discussing women in leadership and overcoming stereotypes.

“Feedback is a gift; growth is an option,” Chávez said. “Anybody who takes any sort of movement that is different or has challenged the status quo is going to get feedback. I don’t call it criticism because it is just uninformed knowledge.”

To Chávez, leadership is both a privilege and an honor that will result in feedback. Being a moral leader is not measured by successes but by the number of times a leader “gets up after being knocked down.”

Chávez said as the first woman of color to be the CEO of Girl Scouts, she made the committment to show girls that if Chávez could be a successful leader, they could be, too.

“I knew that a barrier had been broken, and it’s not because I was in it for my ego,” Chávez said. “It was that I knew that I was being a role model, that there were girls of every race, color, ethnicity watching my path.”

Chávez overcame stereotypes, and she hoped she encouraged other girls to do the same when it comes to taking roles of leadership.

“I defied the data,” Chávez said. “My mother and father told me, ‘Defy the data and create your own path.’ ”

Chávez’s father immigrated to the United States from Mexico to give his children a better life. Her father began working when he was 8 years old and only had a three-week education, but he was able to put two out of three children through Ivy League schools. Because of that, Chávez believes her family embodies the American dream.

“Everyone has an opportunity if they work hard,” Chávez said. “It’s the power of each individual — of their individual voice coming together to make the world a better place. That is what it means to live and breathe in America.”

Chávez said today’s society often discourages girls from taking leadership roles. She asked the women in the audience to raise their hand if they had ever been called “bossy” when trying to get something done. A majority of the audience raised their hands.

“Let’s start changing that dialogue,” Chávez said. “The No. 1 message I want to leave with you today is girls are watching. They can’t be what they can’t see.”

Chávez entered her position when the organization faced a swift decline in membership. She decided she would encourage girls to join Girl Scouts through the idea of EPIC, which stands for empathy, possibility thinking, innovation and courageous leadership.

“To me, it’s about what we do with the information we have and understanding that stereotypes, unfortunately, hold some of us back,” Chávez said. “Luckily for me, I had the opportunity to be surrounded by people all my life who shut down naysayers and who blocked my vision to any potential barrier.”

Today, there are more than 59 million girls and women who have been involved in Girl Scouts. Chávez said the program is so important because of the number of leaders that come out of the organization.

Girl Scouts has a presence in every Zip code in America and in more than 90 countries around the world. Chávez said more girls need to be encouraged to aim for the highest award a Girl Scout can earn: the Gold Award.

Only 5 percent of Girl Scouts globally achieve the highest award. The girls are required to find an issue society faces and come up with a sustainable, global solution. Unfortunately, Chávez said, the Gold Award is not as well-known as the Eagle Scout achievement for the Boy Scouts.

“When a girl puts that on her resume or college application, people need to understand that this is an amazing person who has done amazing things for her community,” Chávez said.

Chávez said she understands the power one individual can have on humanity, which influenced her to dedicate her life to public service.

“Moral leadership is extremely important today, and I argue that we cannot talk about moral leadership as a theory, but how do we place this subject into action,” Chávez said.

As a lifelong member of the Girl Scouts, Chávez has been asked many times by young girls why leadership is important and something they should care about.

Her answer: “It is because of what leadership means, not only in this country, but in your local community. It is because leaders have a disproportionate impact on creating the culture of organizations, of families, of religions. We have to have the moral confidence … to take our efforts and make our own individual decisions.”