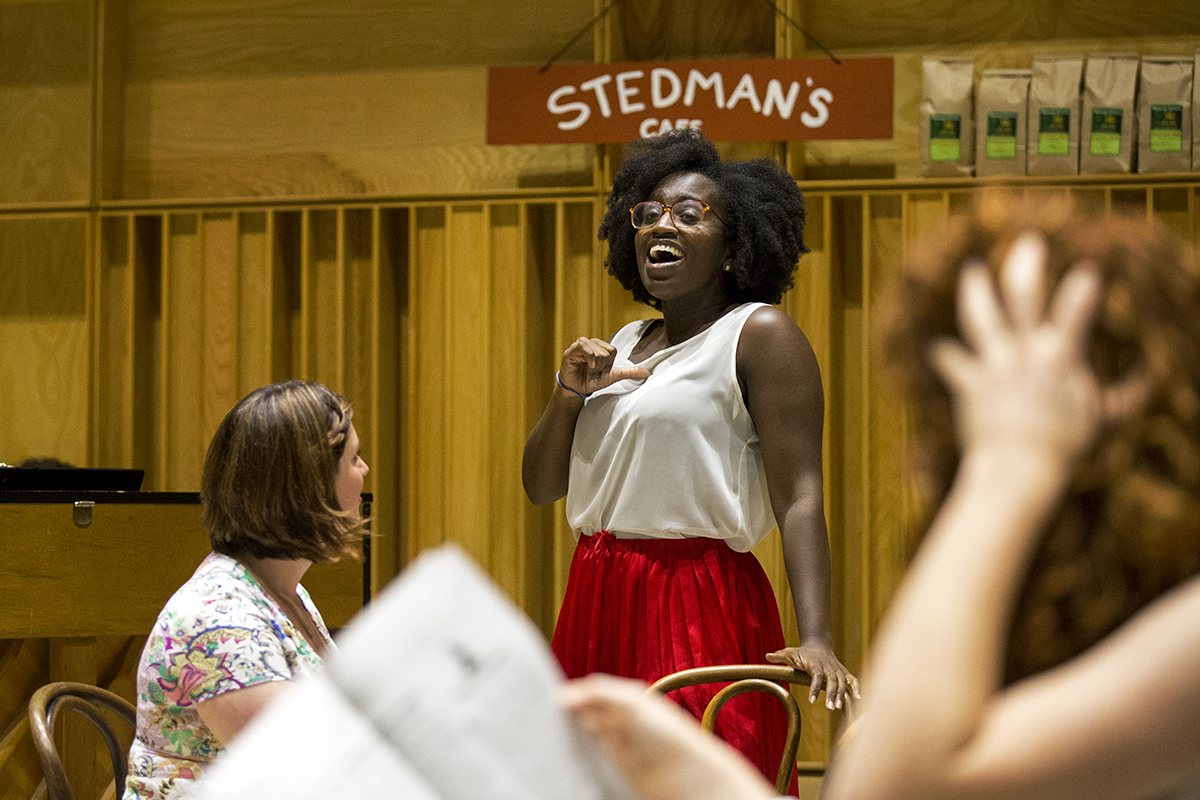 Set during a busy morning at Stedman Corners Cafe, the plot unfolds through the music of composer-lyricist teams Rodgers and Hart, Kander and Ebb, and Maltby and Shire. Although the songs are culled from disparate musical theater productions, they’re woven together in a narrative.

“It’s not a variety show,” said co-director Andy Gale. “There is connective tissue and thematic material that has a development.”

The premise of the show is that on any given day, a coffee shop is filled with friends and strangers alike whose stories can overlap and intersect. Rather than playing contrived characters, the singers will act as themselves. Accompanist and music director Yan Li said the revue gives the Young Artists an opportunity to explore a different part of their personality on stage.

“Sometimes we find someone who is very lively or likes to joke and likes to dance around a lot,” Li said. “They don’t get to do that in Brahms or Puccini.”

Li and Gale began planning the show with co-director and choreographer Teddy Kern in January. They made a list of possible tunes, but it wasn’t until they could workshop with the Studio Artists that they were able to match the right songs to each voice and personality.

Heath Martin, also a baritone, said one of the most beneficial aspects of the show is the opportunity to sing in English. Although the company is performing The Mikado Friday, English language opera is the exception to the rule.

“Many of the classical singers either have never sung in English or have very limited experience singing in English,” Kern said, noting that because of their necessary focus on classical repertoire, the artists are often unfamiliar with the Great American Songbook. “We’re not just introducing them to ‘a song,’ but to a style of singing and a way of expressing themselves.”

The language and acting experience are both beneficial, but Skipworth and Martin both agreed that the revue is also just, well, fun.

“Opera can be pretty dramatic,” Martin said. “The songs in this are all fairly fun and very tuneful.”

One of those tunes is “Sara Lee” from the Kander and Ebb show And the World Goes ‘Round. The men sing it in the style of a barbershop quartet.

The revue does have a later-than-usual start time for Institution programming, but the 10 p.m. curtain will allow audience members to attend both the revue and the 8:15 p.m. Chautauqua Symphony Orchestra concert in the Amphitheater — as long as they walk over to Lenna Hall straightaway. The show will be over by 11 p.m.