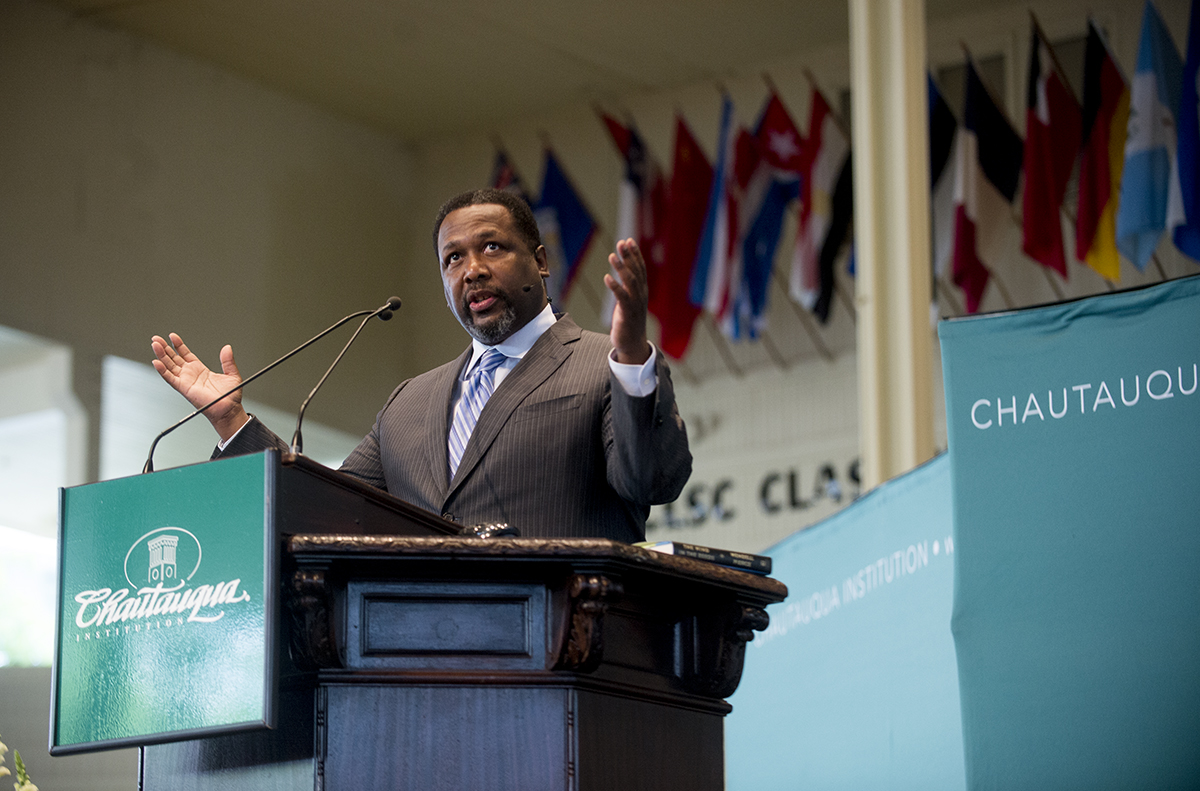 American actor Wendell Pierce’s voice boomed through the Amphitheater, deep and clear: “O for a Muse of fire, that would ascend the brightest heaven of invention,” he quoted from the prologue to Shakespeare’s Henry V. “A kingdom for a stage, princes to act and monarchs to behold the swelling scene!”

Pierce, known for his roles in HBO’s “The Wire” and “Treme,” spoke about American cultural aesthetic and its connection to society during the 10:45 a.m. August 25 morning lecture in the Amphitheater.

Henry V remains a classic today in its truest form, Pierce said. Though it was written by Shakespeare hundreds of years before current generations, the play is written in a way that still evokes emotions in people today. Pierce believes the play will continue to create a connection with people for centuries to come.

“Shakespeare’s call to action and prayer for a muse of fire to spark our imagination taps into the most human desire of expression that speaks to the most authentic part of who we are,” Pierce said. “That humanity connects people from the most disparate of tribes across the world.”

Pierce said those emotions need to be expressed and play a role in the creation of American culture because Shakespeare’s play continues to connect people across generations. Similarly, New Orleans connects people from diverse backgrounds through an integrated culture of music, cuisine and dance.

“Its syncopation and harmony creates a culture that has blossomed and defined one of the greatest meccas of music in the world, my hometown New Orleans,” Pierce said.

Though Pierce never played an instrument, other than portraying trombonist Antoine Batiste in “Treme,” he recognizes the importance of music in American culture and knew New Orleans’ contribution to this key aspect of America.

“New Orleans. The city with a rich history populated by composers and con artists, by chicory farmers and chessmasters, by pirates, pimps, poets, prostitutes and politicians — sometimes embodied in one person,” Pierce said.

New Orleans began as a European colony, settled by the Spanish and French. It thrived on what Pierce called “America’s original sin: the enslavement of captured Africans.” A collection of diverse people settled in New Orleans, a major U.S. port.

“From that amalgam we created a culture of cuisine, architecture and, most importantly, like no other, music,” Pierce said. “Culture [is] that intersection between the events of life itself and how a people deals with it. Culture is who we are at our core: spirit, intellect, life experience and the behavior that they induce.”

As an actor, Pierce said he thinks of himself as a student of human behavior. He sees Shakespeare as an actor before a playwright because he wrote plays that should be lived, not just read and studied as literature.

“His work is a living language that should be experienced, not just dissected in the classroom,” Pierce said. “Shakespeare demonstrated the power of culture and the impact in his time.”

Like Shakespeare, New Orleans has demonstrated the power of its culture and its impact on society through various ways. Pierce described culture as a tool for liberation, as a legacy, as advocacy, restoration and therapy.

“New Orleans music illuminated the possibility of the human experience,” Pierce said. “The idea of jazz as a finite set of notes with infinite possible combinations [is] the greatest of the human aesthetic, which is American aesthetic. New Orleans so vividly demonstrates the role of art in our society.”

New Orleans’ music represented culture as a tool for liberation because Africans played a large role in the creation of jazz music. Pierce said this music, now known around the world, came from the most vile and dark part of American history. He related this back to Shakespeare as well, because the bard wrote about the darkness in the human spirit throughout his plays.

“Even from this Hades, we used culture and art as a tool of liberation,” Pierce said.

In the 18th century, Congo Square, which today is an open space in Louis Armstrong Park, was filled with the sounds of music. African bamboula songs rang out with the loud thud of the bamboula drum, created out of bamboo. Brass bands of European capitals performed in 4/4 time.

“They created an art form now known around the world by bringing those influences together,” Pierce said. “Jazz [is] that art form expressed and conditioned. [It is] finite and constrained, but, through the ability to improvise, ever changing where one might find freedom within. Like the music itself, [there is] freedom within form.”

In this sense, Pierce said, Africans created their freedom through music long before slavery ended.

Pierce grew up in a black middle-class community in Pontchartrain Park, which was the first African-American post-World War II suburb and was born out of the “separate but equal” doctrine. Pierce remembers Aug. 29, 2005, vividly — the day Hurricane Katrina swallowed Pontchartrain Park under 20 feet of water. He wrote about his experiences in his 2015 book The Wind in the Reeds: A Storm, A Play and the City That Would Not Be Broken.

Pierce vowed to help his community rebuild and to continue New Orleans’ cultural legacy of arts and music — a culture that provided hope to his community during a time of struggle.

He felt he owed it to his parents’ generation to step up to the plate and rebuild their home in Pontchartrain Park. He wanted the people of that generation to be able to leave the Earth one day knowing the foundation they built for their children remained intact.

“Like many other people, I had felt a sense of despair that I had never known, but with the New Orleans cultural legacy, an American aesthetic in mind, I was reminded of the words from Waiting for Godot, ‘What’s the good of losing heart now?’ ” Pierce said.

Art reminded Pierce of his legacy, and his legacy reminded him of his advocacy. Pierce is one of the leaders of Pontchartrain Park Community Development Corporation, which works to repair the community. He said the group wanted to take advantage of the innovations of homebuilding such as solar power, but, at the same time, keep those homes affordable.

Pierce said during the process they encountered challenges from politicians and neighbors who didn’t want the subdivision restored, and he quoted Maya Angelou: “You may write me down in history with your bitter, twisted lies. You may trod me in the very dirt, but still like dust I’ll rise.”

Piece by piece, brick by brick and house by house Pontchartrain Park Community Development Corporation began to rebuild the neighborhood.

“We are back!” Pierce exclaimed proudly.

It was around this time when Pierce met with writer and producer David Simon, who spoke at Chautauqua Aug. 1. Simon asked Pierce to be a part of his new TV show about post-Katrina New Orleans.

Pierce said it was the culture of New Orleans that led to its restoration after the destruction Hurricane Katrina left behind.

“Culture as restoration,” Pierce said. “It was a driving force behind that refrain of do not let our culture die.”

To Pierce, “Treme” was like a group therapy session that dramaticized the traditions and homes and music of New Orleans. The series dealt with the emotional scars and PTSD of the historic disaster, and introduced another form of culture: culture as therapy.

“Culture as therapy [is] another example of the impactful purpose of art on the human experience,” Pierce said. “That’s the reason I’m an artist. That’s the purpose of our work — the defining thing about New Orleans culture on display and its music.”

In New Orleans, culture has a variety of meanings, but all of them help the city live out the American belief e pluribus unum, which means “out of many, one.” Out of the variety of ethnic and racial backgrounds that make up New Orleans, one culture emerged. It’s a culture where the food is influenced by French, German, Native American and African traditions. It’s a culture where the spirituals and work songs of the African slaves mix with the sounds of European nations to create a form of music called jazz.