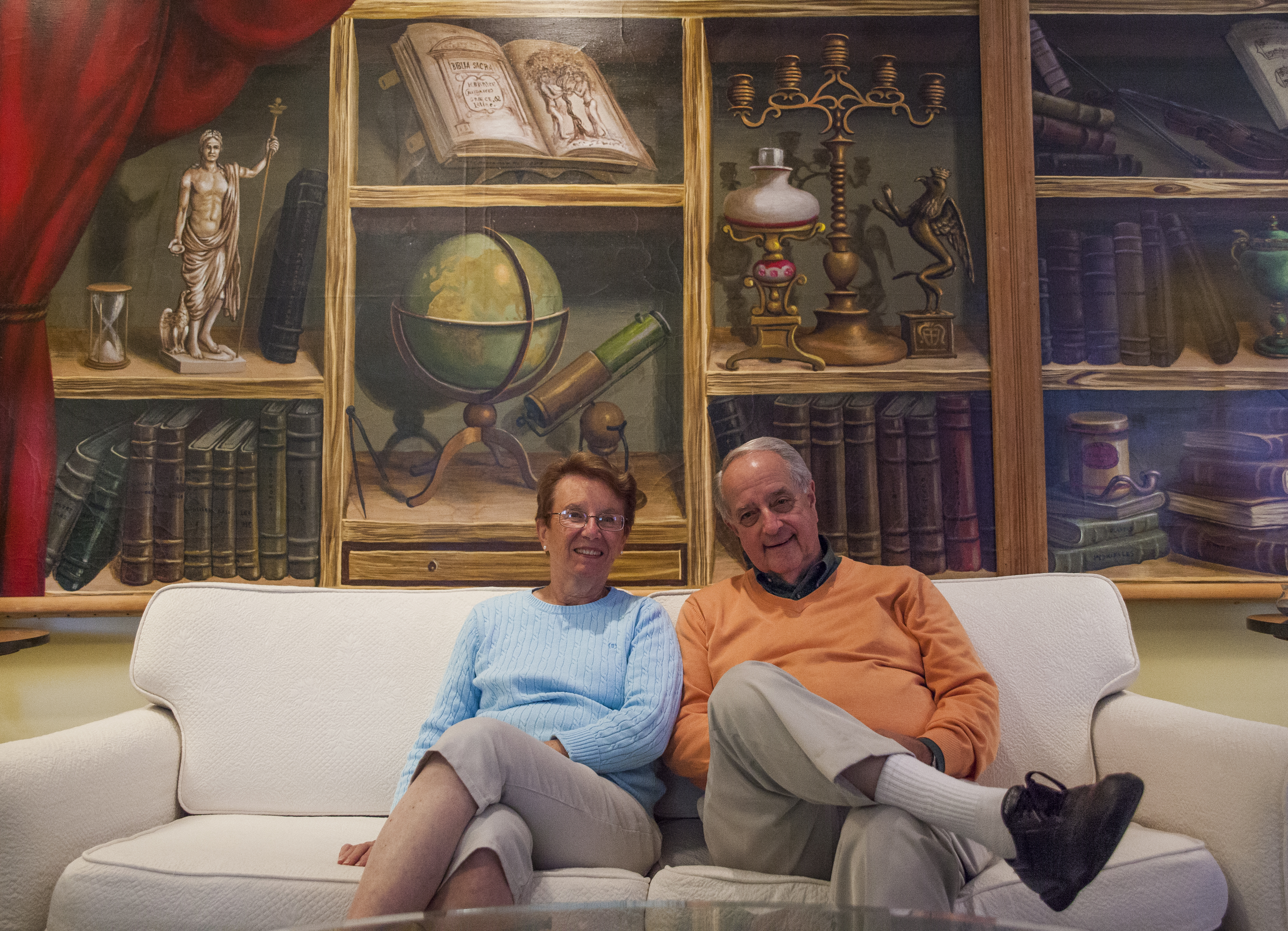 Paul Anthony has been a familiar, almost ubiquitous voice on TV and radio in the Washington, D.C., area for 50 years. Often mellifluously intoning on public television, he is a familiar, comforting presence. Often, he has been associated with jazz music. He is well known for his interviews with jazz greats and for his jazz music shows. He has also been a Chautauquan for decades, and he and his wife Joanne Ritacco are proud grandparents of the most precocious member of the Chautauqua Literary Scientific Circle Class of 2016. We spoke on Paul and Joanne’s capacious porch on the west side of the grounds.

How did you get involved with Chautauqua?

Paul: There was an outfit called the Appalachian Regional Commission. It was a government agency designed to give money to Rust Belt areas so they could rejuvenate their infrastructure. In 1980, two cities won grants. They were Hagerstown, Maryland and Jamestown, New York. A film crew from Texas hired me to come to the cities. We were doing some setup and had half a day off in Jamestown. One of the local people offered to show me around. It was June 19, 1980.

He asked if I had ever heard of the Chautauqua Institute. (Not Institution.) I had not. We drove around the perimeter, 10 minutes altogether. I fell in love with the place in that time. I called Joanne and said, “You have to see this place.” At that time, we were also looking for a place for my parents, who needed accessibility to interesting things going on.

Joanne: I said “Is it on the water? I’m not driving six or seven hours from D.C. and not be on the water.”

Paul: We came two weeks later, over the Fourth of July. We were in Rochester, New York anyway; it’s my hometown. (Joanne is from New York City.) We visited Chautauqua, and it was hopping. Joanne loved it, too. Later that same year of 1980, Joanne’s mother died. She lived in Buffalo so we took all the kids to the funeral. While we were in Buffalo, we brought everyone down to Chautauqua. The kids didn’t know anything about the place. We saw a for-sale sign on the house just behind us here. We called the realtor.

Joanne: Yeah, a lady from Westfield. She had that house on the market for a year and a half. She showed it to us. The price was $40,000. We bought it and renovated it.

Paul: The contractor was Jim Mayshark, on one of his first jobs out of college. He had a big beard, looked like Sophocles. We bought the house next door after a bit, then this house came on the market. It had been a nursing home. We sold the others and here we have been. The kids all grew up here in Chautauqua and they all love it. One built a new house over by Bestor Plaza, the other is renting, maybe waiting for this place. A couple of years ago we were getting ready for them and their entourage, and we got a call. “We’re more interested in staying friends with you than in living in your house with you for the summer. We’ve rented a place two houses down from you.”

Joanne: We had a big influence in expanding the Catholic presence on the grounds.

Paul: When we got here there was one Mass on Sunday at 9:15 a.m., celebrated by the pastor at St. Mary’s church in Mayville. Father Kuntz. This service was overflowing. There were more Catholics on the grounds than you could imagine. We worked at it, and a generous lady, Mrs. Lenna, bought the (Catholic) house (across the west plaza from the Amp). Once things got rolling, it got bigger. We now have 18 priests here each summer; they celebrate Mass twice a day. The Episcopalians kindly let us use their little chapel over by the Hall of Christ. It’s very ecumenical here. We became an oratory. This means you abide by all the rules of the Catholic Church if you are under their auspices. But while you are in the diocese, you are not considered a parish. You enjoy a degree of autonomy as a result. This worked out for us.

Joanne: The Buffalo diocese, which we are part of, has come to accept the arrangement.

How did you two meet?

Paul: I guess I kind of instigated things. Let me back up a minute. I went to Georgetown University. My parents didn’t have college degrees and if they were going to the expense of financing one for me, they wanted me to emerge with a trade. So I enrolled as an accounting major — with no intention of ever becoming a CPA. What I did do is I got a slot on the university’s FM radio station. It broadcast all over the D.C. area. When I graduated, I wanted to get into broadcasting, but didn’t know how to do it. I got a job working at a club on M Street, called The Shadows. They did lots of stuff, but mostly jazz. (Legendary saxophonist) Stan Getz would come. I was the announcer, did other odd jobs. But one Thursday, the boss called me in and fired me. Couldn’t afford me anymore. I went back to the Georgetown campus to visit the career center. I ran into a Jesuit priest, who I knew was on the board of the then-fledgling public TV station in Washington, WETA. I told him my story. He responded by taking me into his office. He called the station GM. “I told him you would see him,” the priest said. I went to the appointment. The GM gave me the usual speech: You need experience in a smaller market, blah, blah. I said I don’t need much money. I need experience. But alas, I got up to leave. As I reached the door, he said, “Could you work for $75 a week?” I said sure. Gas in the car, a little food on the table, cover my rent. I can do that. He said go see the accountant. The WETA accountant was Joanne. It was love at first sight. We were married a few years later.

Joanne: Meantime, I moved away from accounting and became an associate program producer. I worked on “Washington Week” when it was local and later when it went national. Paul continued to do some freelance work. You have to keep options open in the news and entertainment business.

Paul: I had won an award at Georgetown for a jazz show I did. Some of my freelance work was with a suburban station, WLMD, in Laurel, Maryland. I did a jazz show there. But I had to change my name for one of my jobs, so I became Paul Anthony (my middle name) at WLMD. And I got well known in the D.C. area under that name and with that show at WLMD.

Joanne: I also was associate director, and production assistant for many TV shows, even did makeup and other stuff. We had children. It was a busy time.

Paul: We often worked on the same shows. I was the announcer. I had the easy job. I started at WETA in 1964, and have been working for them every since. But after the first two years, it’s all been freelance. I’ve been with “Washington Week” for over 50 years. I’ve been involved with WETA’s televised fund drives for many years.

Let’s talk some more about you and jazz. This is running during Week Nine when Wynton Marsalis is at Chautauqua.

Paul: In the late 1960s, the Federal Communications Commission said you could not simulcast an AM and an FM signal. So FM had to be separately programmed 24 hours a day. I convinced an NBC guy that I could do jazz programming, which would solve his problem. So I would do a two- or three-hour show and pick the music for the 24-hour automated programming, broken only by station breaks. I moved also to WRC-AM in Washington. I did classical music, did the weather. The former TV weather guy moved on and I got the weekend gig. Willard Scott was hired to do the weekday weather forecasts. Willard and I would fill in for each other. At the same time, I was doing a jazz show for Armed Forces Radio. It was called Focus on Jazz. I often worked with the Air Force’s jazz band, the Airmen of Note. We would sometimes go out with the band to Los Angeles. We would record with people like Sarah Vaughan, Frank Sinatra, Ella Fitzgerald in the Capitol Records building at Hollywood and Vine. I’d do interviews with the guest stars. I began to get gigs as master of ceremonies at jazz competitions. One of them was at Washington’s [DAR] Constitution Hall. The boards of judges included major stars in jazz, so I would get know some of them. Through Herbie Hancock and others, there developed a worldwide jazz competition, held in different places around the world. April 30 became designated as World Jazz Day, and I have been involved in those concerts. The 2016 competition was at the White House in Washington. So I have stayed with jazz for many decades. It’s really America’s classical music, in our opinion.

Joanne: Not just our opinion. One of Paul’s station managers, I remember, got complaints when he put on Paul’s jazz show in place of the Chicago Symphony. I’ll never forget what he said: “Sir, we mostly play Europe’s classical music, by the world’s great classical composers. For a few hours on Saturday night, we are going to continue to play America’s classical music — jazz.”

Paul: We moved to New York for three years to do a jazz show on Sirius Radio.

Joanne: Yes, and we stayed in Sam Stayman’s apartment. This is the developer of the Stayman bidding convention in contract bridge.

Paul: We do a jazz festival at the Grand Hotel on Mackinac Island, Michigan every Labor Day. I interview the great luminaries of the jazz field.

Like Roger Rosenblatt does on the Amp stage here at Chautauqua.

Paul: Yes, exactly. Then I emcee the show. I’ve been following these jazz greats all my life, and now I am sitting there talking with them. In my years in radio, I have interviewed just about all of the greats. Charlie Mingus, Dizzy Gillespie, Sonny Rollins. And now, in 2016, we’re going to celebrate America’s classical music on the Amphitheater stage, in the last week of the last season before they build a new Amp. I cannot wait.