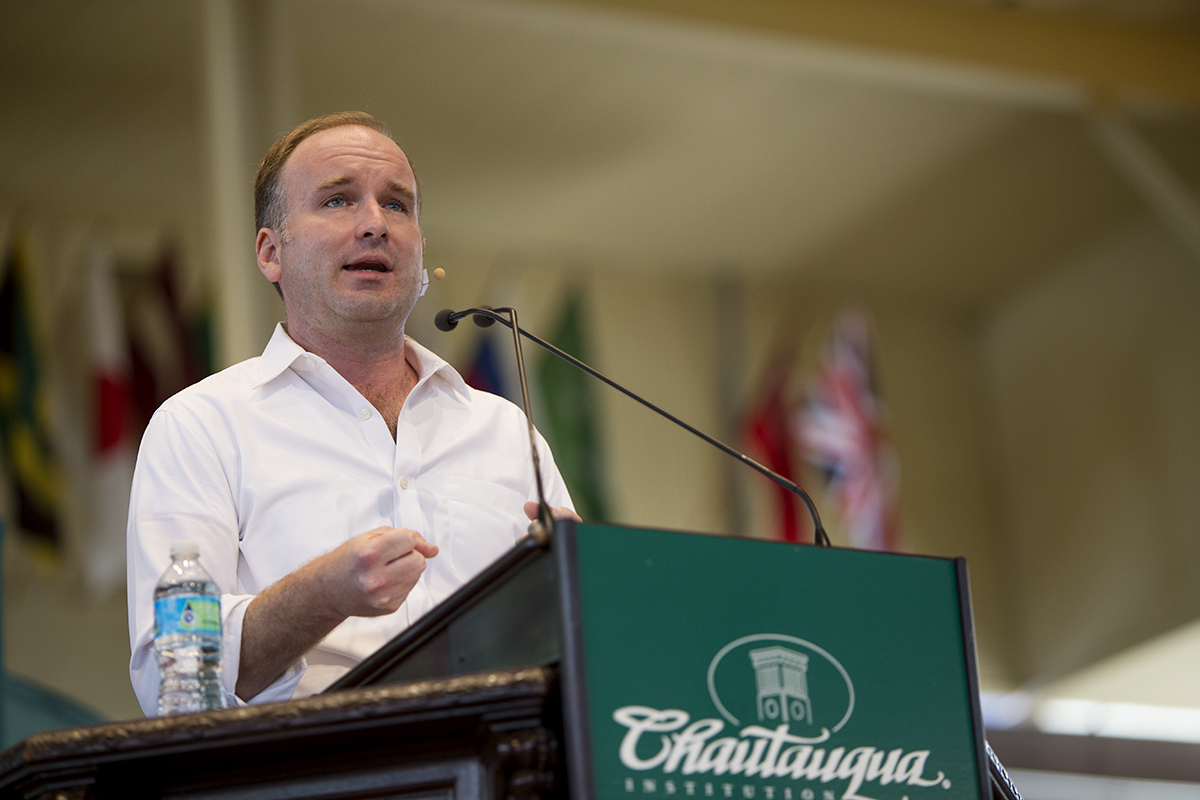 On Jan. 13, 2008, Bryan Doerries saw Sophocles’ Ajax within the pages of The New York Times. The article told the story of an Iraq combat veteran who was plagued by nightmares and didn’t feel safe walking outside in the dark. The 20-year-old veteran shot at two gang members after they stepped out of a dark ally.

The New York Times found 121 cases where Iraq and Afghanistan veterans had committed a killing since their return home. Many of those killings were attributed to combat trauma and the stress of deployment along with other contributing factors such as alcohol abuse and family discord.

“Violence in the wars in Iraq and Afghanistan had returned to American soil,” said Doerries, founder of Theater of War. “Town by town across the country, headlines had been telling similar stories.”

Doerries closed Week Eight’s theme of “War and Its Warriors: Contemporary Voices” by discussing the connection ancient Greek tragedies have to today’s veterans who are returning home from combat during the 10:45 a.m. Friday morning lecture in the Amphitheater.

Though many people view Greek tragedies like Antigone and Oedipus Rex as obligatory reading in their high school English courses, Doerries saw an outlet for combat veterans.

In 409 B.C., 17,000 soldiers gathered in the Theatre of Dionysus in Athens to view the performance of Sophocles’ play Philoctetes. The production gave the soldiers a space to express their grief and mourn their losses.

“A form of storytelling rose out of eight years of war to communalize trauma, give citizens permission to access and express their emotions,” Doerries said. “Sophocles’ plays emerge as a powerful tool designed to help those who have been to war make meaning out of their fragmented memories [and] evenly distribute the burden of what they brought back from battle upon the shoulders of all Athenians.”

This inspired Doerries, and he wanted to travel to military bases to perform those plays for infantry soldiers and Marines with the hope that those stories would encourage a conversation to flourish about the effects of war. His friends, however, greeted the idea with concern and bewilderment.

“Though many scholars had made the connection between ancient Greek drama and the Athenian military, no one attempted to perform these plays for active duty service members — let alone with the hope that they would reveal something timeless and profound about the experience of war,” Doerries said.

Doerries found the tragedies written by Sophocles “as contemporary as the morning news” even though the play had been written more than 2,500 years ago.

When Doerries came across the Times article, titled, “Across America, Deadly Echoes of Foreign Battles,” his vision of sharing those ancient stories with soldiers was diminishing. He was on the verge of giving up on his dream when he read the section “An Ancient Connection” that discussed the connection Capt. William P. Nash made to Ajax.

The following week, Doerries scoured the internet looking for Nash’s email address. When he finally found it, he pitched his idea of performing the play for active duty soldiers. Nash responded within 24 hours and invited Doerries to give a presentation and short reading for the next Marine Corps Combat and Operational Stress Control conference.

Doerries would have 45 minutes and an audience of 800 people for retelling Ajax’s story. When the day arrived, Doerries said it was clear many of the service members in attendance were expecting a fully staged production of the play.

“When they discovered four actors in their street clothes sitting at a long table in front of microphones wielding scripts instead of battle axes and spears, a sizable portion of the audience was visibly disappointed,” Doerries said.

However, 20 minutes into the performance, something shifted within the audience. Ajax, played by actor Bill Camp, let out a piercing wail that attracted the attention of the audience.

“A great man must live in honor or die an honorable death!” Camp cried out, before plunging himself on the enemy’s sword.

“Something in the audience began to shift,” Doerries said. “All the cellphones disappeared. Everyone in the room leaned forward and locked on, a military term that describes when service members stare intensely at something or someone without blinking.”

Every Marine focused on the play. Some covered their face with their hands, peering through the cracks between their fingers. Others stared off into the distance, contemplating the message of the play, and some Marines even wiped tears from their eyes.

“It was as if these ancient plays had found their intended audience almost 2,500 years after they had first been performed,” Doerries said.

The performance ended with a long, powerful silence before the audience erupted with applause, which was followed by a standing ovation. Doerries said the play had clearly struck a nerve.

The presentation following the reading included a small panel of individuals who spoke about their thoughts on the play before engaging in a discussion with the Marines in attendance.

A wife of Navy SEAL and mother of a Marine spoke during the panel. The woman spoke about a particular line in Ajax: “Our home is a slaughterhouse.”

“Each time, he [her husband] returned like Ajax, dragging invisible bodies into our house,” she said.

The discussion slowed, and Doerries began to worry the discussion would not be successful when only a few people spoke, followed by a long, awkward pause of silence. This silence was broken when a small nun, who Doerries later learned was a chaplain in the Canadian Army, said she wanted to discuss a line from the play that she had heard uttered by many soldiers throughout her service: “Witness how the generals have destroyed me.”

This phrase elicited anger from those who found the line disrespectful toward generals, three of whom were in attendance. Others related to the line, including the woman who spoke during the panel. She told the generals’ wives in attendance that she had heard her husband say something similar after he returned from service.

“At this point, the tension in the room had risen to such a boil that I had started scanning for the nearest exit in case — in the heat of the argument, that seemed most likely to escalate — we needed a quick getaway,” Doerries said.

However, after the nun spoke, 30 people lined up to speak about what had resonated with them when watching the performance.

“Each person, whether or not he or she responded directly to the nun or to the general’s wives, … quoted lines from Ajax and Philoctetes without consulting notes as if the Marines and their spouses had know Sophocles’ plays their entire lives,” Doerries said. “They interweaved their comments about the plays with their own experiences with such prosody and rhetoric that it seemed like Sophocles himself had written their monologues.”

A discussion that was supposed to last 45 minutes ended up lasting for three hours as Marines and their spouses went up to the microphone to join the discussion.

Years after that first performance, Doerries led the discussion after a performance among soldiers in Germany. He asked questions he had grown accustomed to asking after every showing: “Why do you think Sophocles wrote this play? What’s he trying to say?”

A junior-enlisted soldier, no older than 20, replied, “I think he wrote it to boost morale.”

Doerries was unsure of what this young soldier meant. He asked him, how could a story about a great warrior losing his best friend, feeling betrayed by his general and coming unglued to the point where he could no longer survive under the weight he felt after the war possibly boost morale?

“Because it’s the truth,” the soldier said. “We’re all here watching it together, shoulder to shoulder. It’s not being whitewashed or glorified.”

The young soldier’s response stuck with Doerries and changed the way he thought about Sophocles and the message the plays shared. Last week, Doerries directed his 351st performance with the Theater of War.

Each performance is viewed by 250 to 500 active duty service members, and thousands more view the performance through mass media. Doerries continues to share the message he found within the dialogue of Sophocles’ plays — a message of a community where loss and grief can be openly expressed.