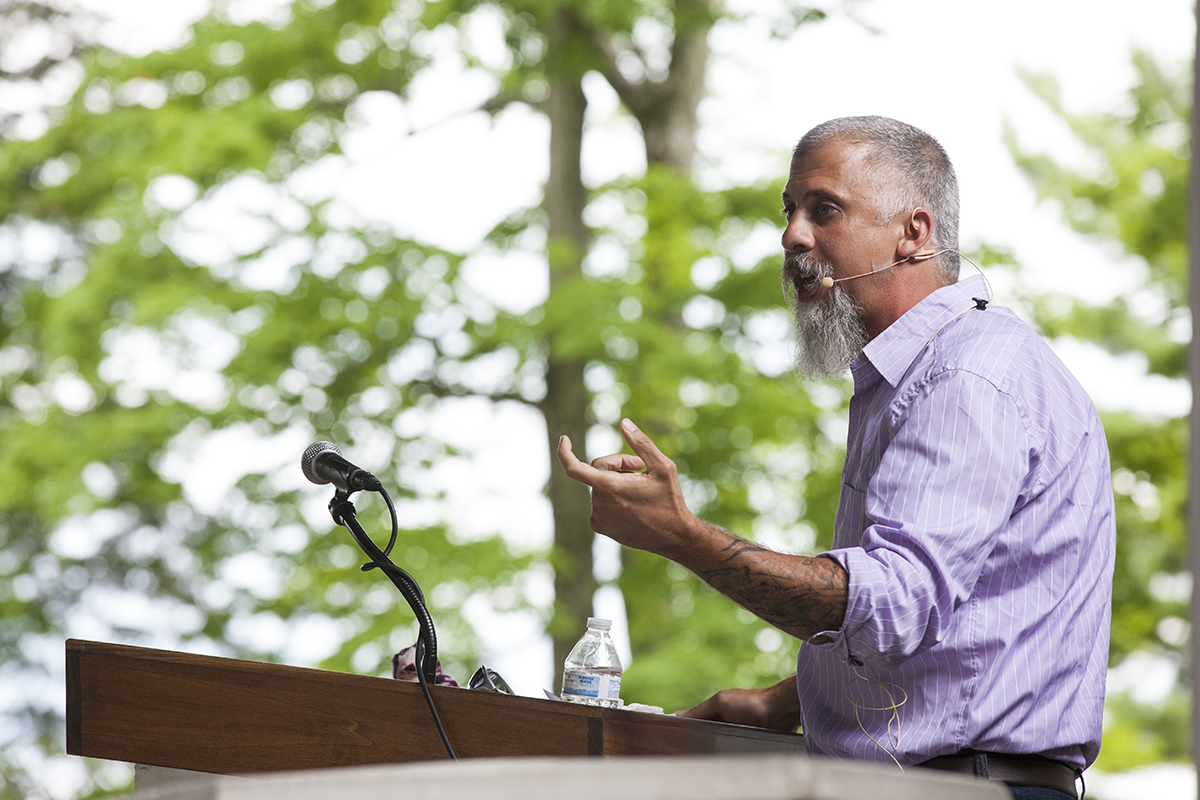 The Pokémon Rattata appeared at the Hall of Philosophy Wednesday afternoon and Robert Geraci called it revelation.

The Rattata, of course, was part of Pokémon Go, the augmented reality app that makes Pokémon appear in the world (on people’s cellphones) and allows users to catch them. Geraci was not saying the Pokémon was a sign from God, but that rather the new phenomenon is a religious experience because it attempts to add a meaning to a world that too often seems devoid of it.

“This technology tells us there’s something more, as you’re walking around in the park, in the street, here, perhaps, in the Hall of Philosophy,” Geraci said. “Wouldn’t that be fabulous to find added layer of meaning, that somewhere right over there there’s a little yellow monster hiding?”

In his Interfaith Lecture, Geraci explored how video games and transhumanism seek to make meaning out of the world, whereas Nietzsche wrote, “God is dead.”

In declaring that “we have killed God,” Nietzsche wasn’t saying that humanity slew a physical deity, Geraci said. Instead, he was arguing humanity has come to doubt God, and once that absolute certainty of faith dissolves, then God might as well be dead.

The point of religion has always been to overcome the limits of the human body and the daily grind of life and add meaning to the world, as it continues to help billions of people do. But many in the world, Geraci said, have instead tried to use technology ranging from Super Mario Bros. to transhumanist artificial intelligence to create new forms of meaning.

“The world as it’s structured for us leaves us wondering how to make it meaningful,” Geraci said. “And through our religious and, it turns out, technological practices, we can do that.”

This idea first occurred to Geraci when he needed to take a science class for his Ph.D. in religious studies. While reading pop culture books on robotics and AI, he realized they are are deeply religious texts.

The religious method of meaning-making is straightforward, Geraci said. The doctrine of providence teaches that everything in life has a purpose and one just has to look hard enough for the meaning. Conversely, that view implies that historical events such as the Holocaust had meaning, which can be difficult to reconcile.

Those pop culture books gave life a different kind of purpose. One major book takes Moore’s Law, the principle or observation that computing power doubles each year, and extrapolates that humanity will soon create artificial intelligence that will then use its own cognitive capacity to create an exponentially smarter version of itself.

In the long term, those machines will fill the Earth and universe with meaning by wiring with technological minds. Humans, Geraci said, will be a part of that by uploading their consciousness and merging themselves with the machine.

That theory, of course, rests on the assumption that humans don’t have souls and the essential nature of a human is a series of neurochemical processes that can be mimicked on computers without skipping a beat. It also requires belief that the proliferation of intelligence is a measure of meaning.

Religion, however, does not just enter the modern world through that transhumanist vision. Western society has made what Geraci said are “authentic fakes,” things no one would think of as religion except in a perhaps-derisive tone, but that perform the same function.

“Baseball is an authentic fake, because for people who are deep and profound fans of baseball, they have a community, they have places of pilgrimage — Cooperstown, the House That Ruth Built — they have semi-divine figures,” Geraci said. “Why do you think it bothers them so much when semi-divine figures use drugs?”

He quoted a leading gamer who said he identified with his Warcraft character to the point that if artificial intelligence could make his virtual character do all the things he would have done, that would be a sufficient form of immortality. Finally, Geraci offered a quote from MMORPG pioneer Richard Bartle.

“ ‘Video games have one overall goal: being someone else in order to become a better you,’ ” Geraci quoted. “He said some people will tell you that they just want to play a game, not undergo some mystical transformation of the soul, but he goes on to say, ‘They do, they just don’t know it yet.’ ”