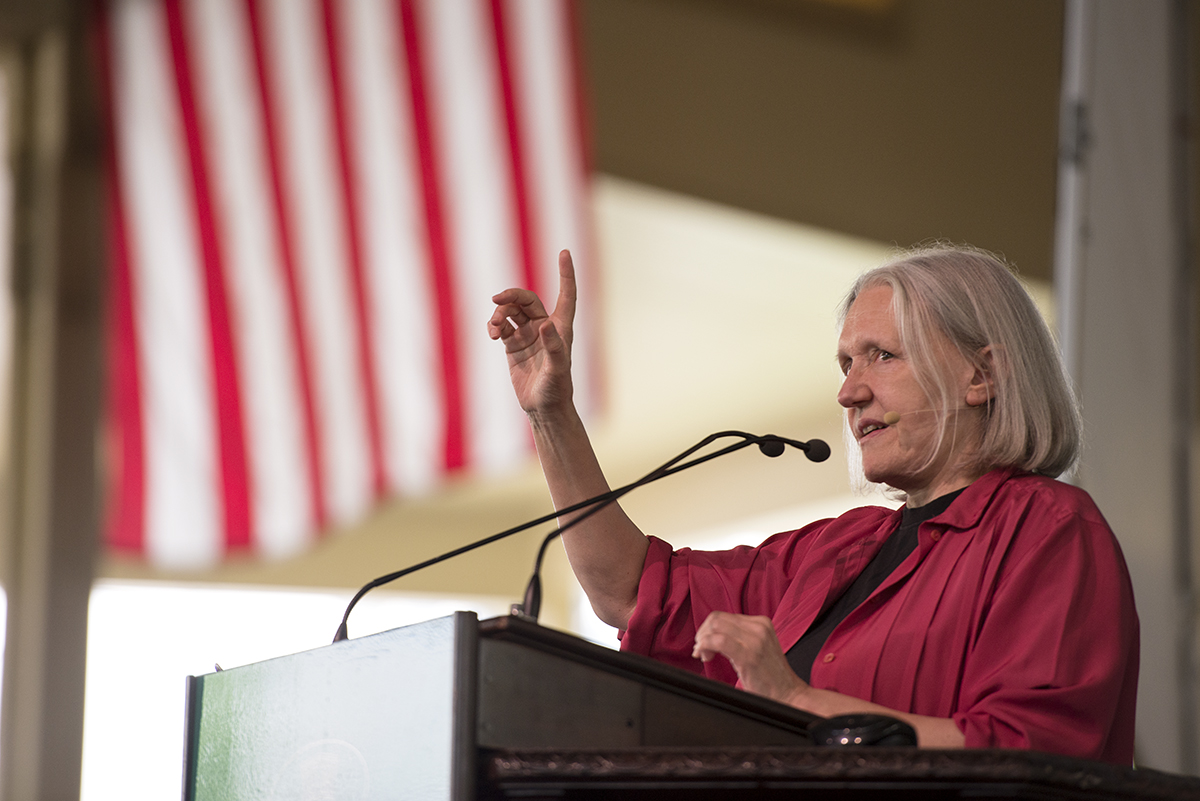 A city is more than just tall buildings, busy streets and traffic jams during rush hour. To Saskia Sassen, cities are a place where anyone can create a history and a culture — regardless of wealth or power.

Sassen, the Robert S. Lynd Professor of Sociology at Columbia University, focuses on the globalization of urban cities. She spoke about foreign investment in cities and the impact those investments have on urban life during the 10:45 a.m. August 5 morning lecture in the Amphitheater.

Sassen said up until 40 or 50 years ago, if someone saw a cluster of buildings, they would call that a city. Today, many of those building groups are privately owned gated communities or luxurious office spaces.

“The big city, … which cannot be fully controlled, is a space where those without power get to make a history, a neighborhood economy, a culture,” Sassen said. “They can’t do that in an office park.”

The majority of the cities in the United States are medium-sized and function well, Sassen said. However, there are two forms of urban formations growing quickly: contemporary high-rise cities with skyscrapers and privately owned buildings and low-rise cities Sassen referred to as “the periphery.” Those cities are dense with residential housing.

“They pose problems, but they are also, in a way, an opportunity,” Sassen said of periphery cities. “Those people who live in those little houses, it’s not a perfect life, but it is a life. It is not the misery of slums.”

Those high-rise buildings result in de-urbanization of the cities they occupy. The growth in those types of cities can be credited to an increase in foreign investment in large megacities such as New York City, Paris, London and Tokyo.

London and New York City continue to be the top two investment sites for foreign countries. Sassen referred to them as “objects of desire.” From mid-2013 to mid-2014, $500 billion was spent on property buying. The following year, the amount spent globally on foreign investment doubled, exceeding a trillion dollars.

Part of the problem, Sassen said, is the lack of transparency in those foreign property purchases. Singapore recently invested in a large portion of Detroit. However, few people are aware of the amount of land purchased by Singapore, as the contract was kept quiet. Sassen said the contract is in the public domain for viewing, but is difficult to locate.

She also mentioned a powerful company owned by Qatar’s royal family — a family who owns more property in central London than the Queen of England. Sassen recalled a trip she took through London where many tourists commented on the beautiful, historic British buildings.

“Well, guess what,” Sassen said. “They are all owned by one foreign company. It’s invisible. You would think that since it deals with very material stuff, buildings, that it would sort of tell the full truth. You can walk through all kinds of parts of the city and not know who owns it.”

A Chinese company’s recent purchase of Pacific Park, formerly known as Atlantic Yards in Brooklyn, New York, represents the de-urbanizing dynamic of foreign investment, Sassen said. That company plans to completely redesign the current structure of the commercial and residential development. Part of that plan includes the construction of 15 high-rise buildings.

“That raises the density of the place enormously,” Sassen said. “I would say it actually de-urbanized Atlantic Yards.”

Though the top 100 cities only account for 10 percent of the population, Sassen said, they represent 76 percent of property investment. Many of those property purchases are made by “shell accounts,” or fictitious companies used to hide the identities of the buyers.

In 2014, 54 percent of sales more than $5 million in Manhattan were purchased by shell companies. A large portion of major buildings, including the Time Warner Center, the Bloomberg Tower and the Plaza Hotel, are owned by foreign shell companies.

Sassen argued those foreign investments altered the atmosphere of the city through de-urbanization. The cities have moved from public to private as large corporations buy property in those major cities.

That transition into private ownership decreases the interaction between people who have a diverse background of ideas, politics and culture. Sassen used rush hour of an example of a time where all types of people interact regardless of class or race.

“There are moments in the daily routine of the city where we all become urban subjects — not racial, not political, not class, not religious: urban,” Sassen said. “I argue that that’s a capability embedded in urban space. You don’t see that necessarily in an office park or something like that.”

Sassen said those large foreign companies can’t go wrong with investing in properties and urban land. Though it has been found to be profitable, it is disrupting the natural history of those cities.

“You have a lot of stuff happening that is literally shrinking the available land,” Sassen said. “You have a very peculiar condition emerging, which I sort of think of as a massive … loss of habitat.”

As the city becomes privatized, Sassen said it shuts out the voice of the people living in those areas. De-urbanization of those major cities must be taken seriously because when a large city is at risk, it can have severe impacts on the economic stability of it and surrounding cities. Sassen said part of the problem could be resolved if private companies stopped looking for profit and started enabling poor neighborhoods in those large cities.

“The constituents of the city should have strong voices, which they don’t always have,” Sassen said. “Cities are where you have a lot of the weaker members of our society. There’s something about cities that should be recognized, respected and enabled, and that is what I think we have been failing in the last 30 years.”