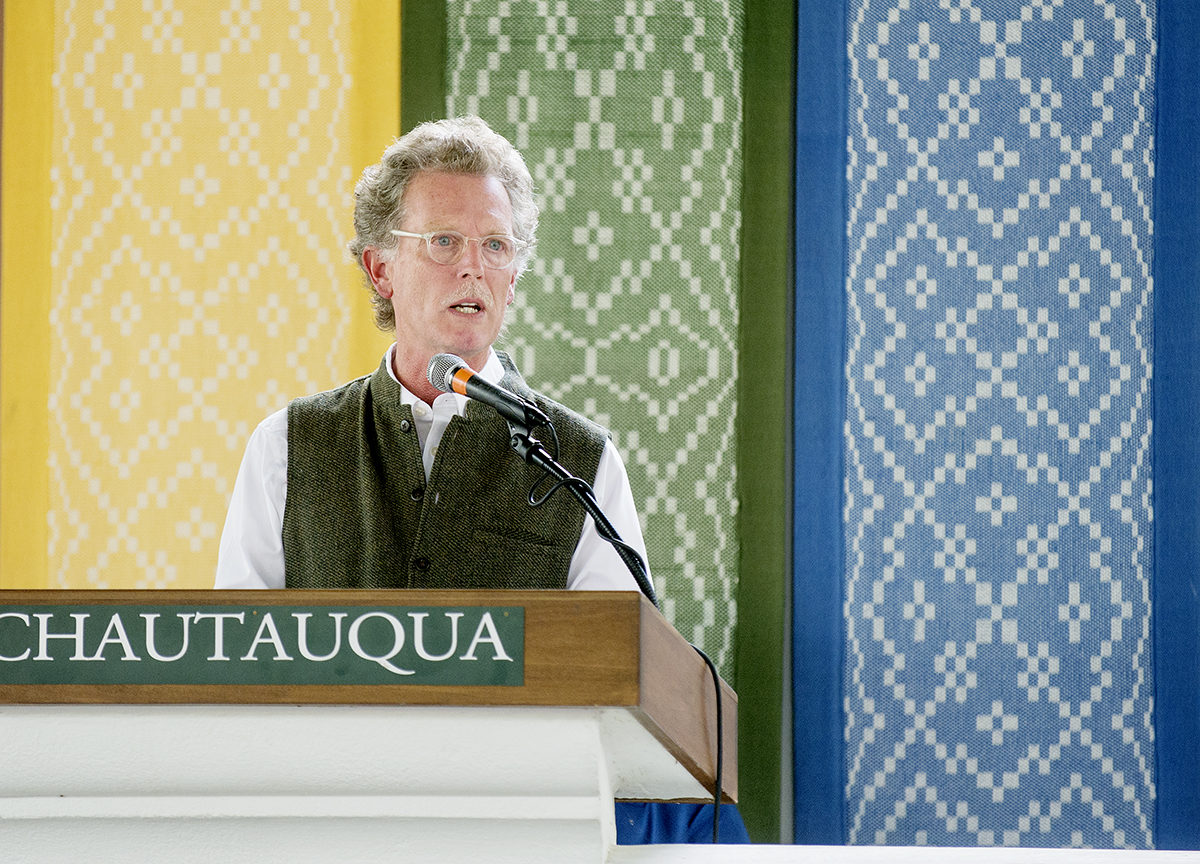 “In the Celtic tradition, the stranger is celebrated. There is an imperative to welcome the stranger because in the stranger you will encounter the sacred, the Holy Otherness instead of the Wholly Otherness,” said the Rev. John Philip Newell. “In the Isles, there is a rune of hospitality that says, ‘We saw a stranger yesterday and we put food in the eating place, and drink in the drinking place and music in the listening place. And in the name of the triune God he blessed us, and our family and our cattle and our dear ones. As the lark says, often, often, often goes Christ in stranger’s guise.’”

Newell was preaching at the 9:15 a.m. Wednesday morning worship service in the Amphitheater. His sermon title was ‘Holy Otherness” and the Scripture reading was Matthew 25:31-40.

“Who are the strangers?” he said. “Individually and collectively, we treat strangers as Other rather than essentially brother or sister.”

Much of his sermon was told in the context of a plane trip to give a lecture in Atlanta.

Newell acknowledged that, like many people who travel frequently, he protects his time on a plane for rest or work.

“I say hello to recognize the presence of the person, but say it in such a way that this will be the last word until farewell,” he said. “I am much more limited [as a social being] than you might have expected.”

On that trip to Atlanta, his seatmate was a beautiful woman he thought was from India whom he thought spoke little English. He started working on his talk for Atlanta that would include the Exodus story of Moses and the burning bush and references to Martin Buber’s book I and Thou.

The story of Moses and the burning bush is about sacred presence, he said. A friend who is a rabbi taught Newell the important thing was not that the bush was burning, but that Moses noticed.

“Everything is burning [with sacred presence],” Newell said. “Martin Buber in I and Thou invites us to look for the eternal Thou in every Thou, the eternal presence in everyone and everything.”

Moses asked the presence in the bush to tell him its name so he could tell the people. The response was, “I Am Who I Am” or “I Will Be Who I Will Be,” Newell said.

“There was no name, no definition, no categorizing,” he said. “This is our essential identity, we are of I Am. We can say many things about ourselves but they don’t capture the essence of our being. When we name things, we push them [to be] the Other.”

Instead of getting the work done he wanted to on the plane, Newell fell asleep. When he awoke, the woman sitting with him tapped him on the arm and covering her face with her veil, asked if she could ask him a question. “What does ‘I Am Who I Am’ mean?” she said. Newell thought to himself, “How wonderful that I was given this opportunity to speak about the central mystery in the simplest language.”

The woman was from Nepal and spoke better English than Newell thought; she was a daughter, a newly married wife in an arranged marriage and a Hindu. He told her, “This is all true [of who you are] but none of it captures the heart of who you are. What is at the heart, you heart, is holy and does not bear a name.”

She then asked about the word “Thou.” Newell told her, “It is the word I would use to address the true heart of you that can’t be named or defined.” The woman said she was listening to what her mother and her faith told her and was listening to her priest, but she was asking herself, “Who am I?”

“I am a Christian teacher and Jesus teaches with story and then asks us to decide [what is right],” Newell said. “Listen to your parents and your priest and then decide within yourself who you will be, what in you is unnameably holy.”

That was her first time to come to America and her husband, in the arranged marriage, had come ahead of her. She had been frightened but was now feeling a sense of peace. Newell told her, “When I pray tomorrow I will seek a blessing for you.” “And I bless you,” she replied.

“I knew I was in the presence of the eternal Thou; I knew myself to be deeply blessed,” Newell. “I was thankful I had not hidden [in work] but it has not changed my travel practice. She is in our land, behind the veil, speaking another language, practicing another religion in communities that seem strange, waiting to be reverenced by us. She carries a blessing for us. Shall we look for her, honor her? If so, we will be truly strong, truly great as a people. We will be blessed.

“A stranger came by yesterday and we put food in the eating place, drink in the drinking place, music in the listening place and in the name of the triune God, she blessed us, our family, our cattle and our dear ones. As the lark says, truly, truly, truly, there goes Christ,” he said.

The congregation waited silently in anticipation.

The Rev. Virginia Carr presided. Maggie Brockman, who first came to Chautauqua as a voice student and for the last 14 years has served with her husband, Bill, as host at the Hall of Missions, read the Scripture. Jared Jacobsen, organist and coordinator of worship and sacred music, played “The Postlude for the Office of Compline,” by Jehan Alain for the sacred music. The Motet Choir was singing at the CLSC graduation ceremonies. The Randell-Hall Memorial Chaplaincy and the Geraldine M. and Frank E. McElree Jr. Chaplaincy provide support for this week’s services.