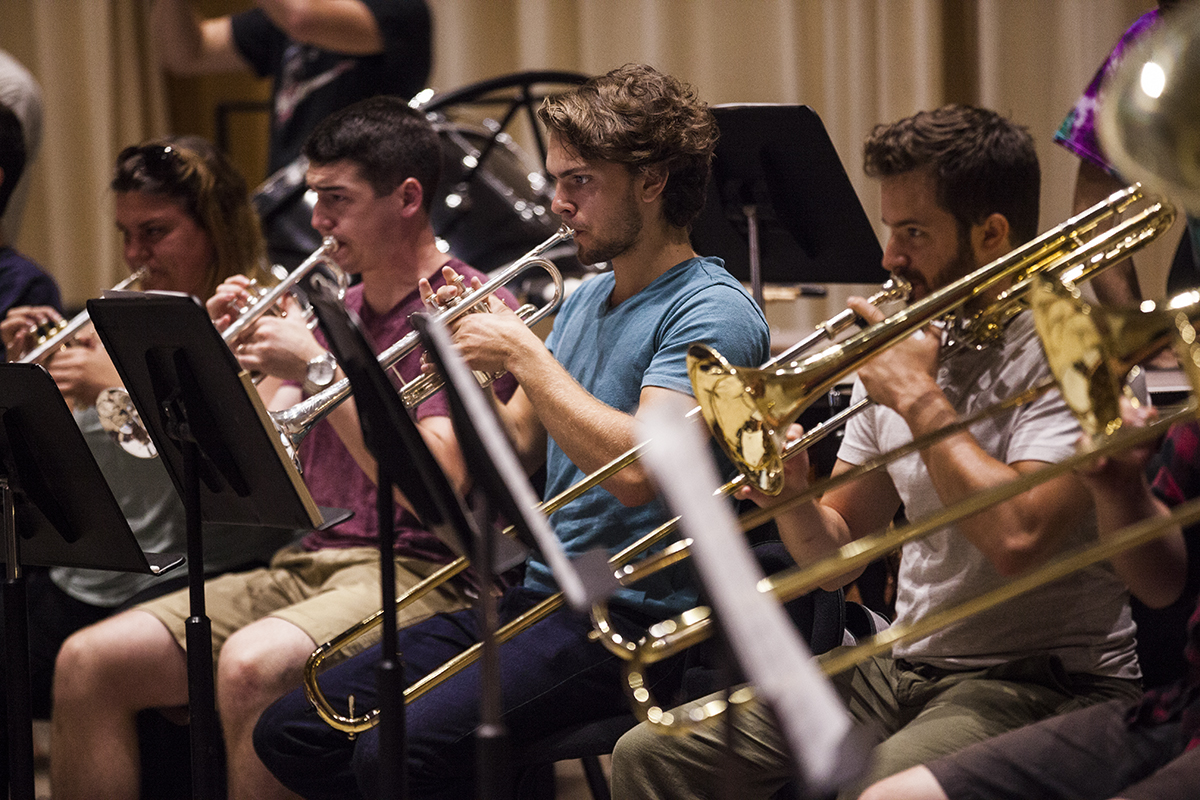 The Music School Festival Orchestra’s sixth and final concert of the season includes a piece of music written with a summer evening of leisure in mind, a work that represents the genesis of 20th-century music and a piece filled with wit that will challenge the ensemble musically.

“Gazebo Dances,” by John Corigliano, will start it all off at 8:15 p.m. Monday in the Amphitheater. Maestro Muffitt will lead the orchestra in what he described as a lighthearted expression with some tenderness put in as well.

“It’s perfect for this occasion,” Muffitt said. “This is music that’s inspired by summer bands in a community park, playing in a gazebo. It’s full of Americana.”

The delights of summer evening entertainment are portrayed in a set of dances, Corigliano said in his notes on the piece.

“[‘Gazebo Dances’] begins with a Rossini-like overture, followed by a rather peg-legged waltz, a long-lined adagio and a bouncy tarantella,” he wrote on his website.

“Prelude and Liebestod” from Tristan und Isolde by Richard Wagner will make use of the strong relationships that have been forged between the students during the past seven weeks.

“It’s a good piece to end [the season] with, because we know each other now as a group,” said 2016 David Effron Conducting Fellow Louis Lohraseb. “It’s not technically challenging, but it’s musically challenging. It takes a sense of ensemble from everyone to achieve this consistent, unstopping, yearning quality.”

Lohraseb cited the Tristan chord in the opening phrase of the piece’s prelude as a significant moment in musical history. He said it is often discussed as the piece that began the 20th century.

“This chord has boggled theorists forever because it can be interpreted in a myriad of ways,” Lohraseb said. “That means you have ambiguity, and that’s the whole point of the piece.”

“It is always moving forward; … that’s where he gets the yearning. That languishing is achieved by delaying the arrival point,” he said. “It’s something that is part of the physics of sound.”

Coming after the lighthearted opening, the concert will conclude with Dmitri Shostakovich’s deeply tragic Fifth Symphony in D minor, though its tragic elements are veiled by a festive flavor.

“It’s a piece that the composer wrote in order to appease the Soviet government,” Muffitt said. “He wrote it with an outward appearance of a celebratory tone, but there is a lot of tragedy in the inner voices.”

Lohraseb said it was typical of Shostakovich to put on a happy face when his work may have some biting wit.

“The whole symphony ends in this bright exuberation of D minor and triumph, but it’s sort of known that that is meant by Shostakovich as the forced cheering of a public for a government that they don’t want,” he said. “So there’s the wit.”

Hornist Rennie Cotner said this will be the orchestra’s best concert of the summer, because Muffitt has placed the instrumentalists where they sound best, based on what he has been hearing from them all season.

“The brass section is excited because the Shostakovich gives us the opportunity to explore the upper dynamics of our instrument,” Cotner said. “It’s super fun to play loud and show our power, and Shostakovich is famous for writing great brass parts.”

Gallery: Porch Sitting in the Grounds