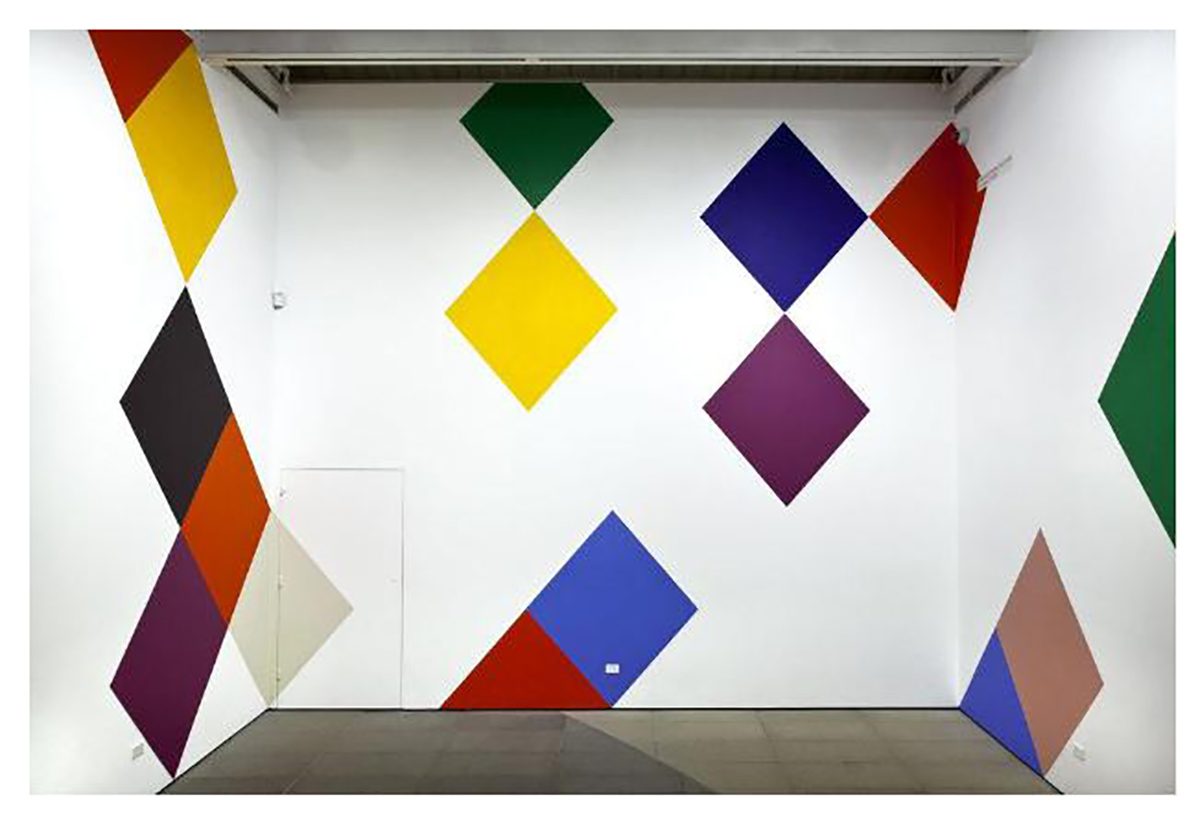 After coming back from an art exhibition at Virginia Commonwealth University, painter Stephen Westfall had a dream.

“I came back to New York and promptly had a dream about painting the entire interior so I woke up my girlfriend at 5 in the morning,” Westfall said. “[I] stumbled to the computer and typed off a letter saying I had this dream: How about I paint the interior of Solvent Space [at VCU]?”

Westfall, who is giving a lecture 7 p.m. Friday at Hultquist Center, had been doing canvas paintings, but began thinking more architecturally after being commissioned to make designs for stained-glass windows in a chapel. Then, seeing work by artists such as Polly Apfelbaum at Solvent Space sparked an idea for a large-scale wall painting.

From there, Westfall taught students his design and how to make it, and this collaboration transformed the gallery space into something that resembled a geometric Fabergé egg, he said. After that 2007 installation, he began doing more of those geometric wall paintings at places such as OMI International Arts Center and McNay Art Museum, and recently completed two installations at University of California, Santa Barbara, one of which is a 100-feet-long and 20-feet-high panorama that spans all four walls of the gallery.

During his Visual Arts at Chautauqua Institution lecture, Westfall, a painting professor at Rutgers University, said those wall paintings would comprise the bulk of the talk, but he will also discuss the differences between genres such as minimalism and pop art, as well as how architecture influenced him as an artist.

Although many people have characterized him as a hard-edge painter who creates distinct separations between colors, Westfall doesn’t use the same techniques and instead thinks of himself more as a post-pop geometric painter. Additionally, in his geometric abstraction work, Westfall said he recognizes that nothing is truly abstract.

“You look at my work and you see Harlequin [diamond] patterns, then the Harlequins attached to costumes, they attach to 20th-century art, ” Westfall said. “There’s always a connotation to everything. … The fiction of painting is that I’m painting Arcadia where there are no paintings; it seems to me not true to how recursive life really is.”

Westfall’s interest in architecture began very young, and he would read reviews of architecture in Time magazine and check out books on architects when he was 10 or 12. Later, during his college years, Westfall became an art critic, while showing his own figurative-style work. It was through interactions in the 1970s with abstract painters such as Agnes Martin and minimalist artists in Los Angeles that Westfall gradually moved toward geometric abstraction.

Besides architecture, Westfall said his work can relate to sign painting in the way that someone could spot a brightly colored billboard or sign from a kilometer away. In fact, many American art movements such as pop art and abstract expressionism allow for “color telegraphing across space” in paintings, in a way that intimate European art couldn’t always do. Westfall said thinking about how space and light affect a painting can help artists approach their work in a newer or more exciting way.

“You’re in a conversation with space,” Westfall said. “I often tell students, one way to work is [to] imagine a room, the dimensions variable, the light-source variable … [and] see what they look like and then make those paintings, as opposed to like, ‘Ugh, I’ve got to make another nude.’ ”