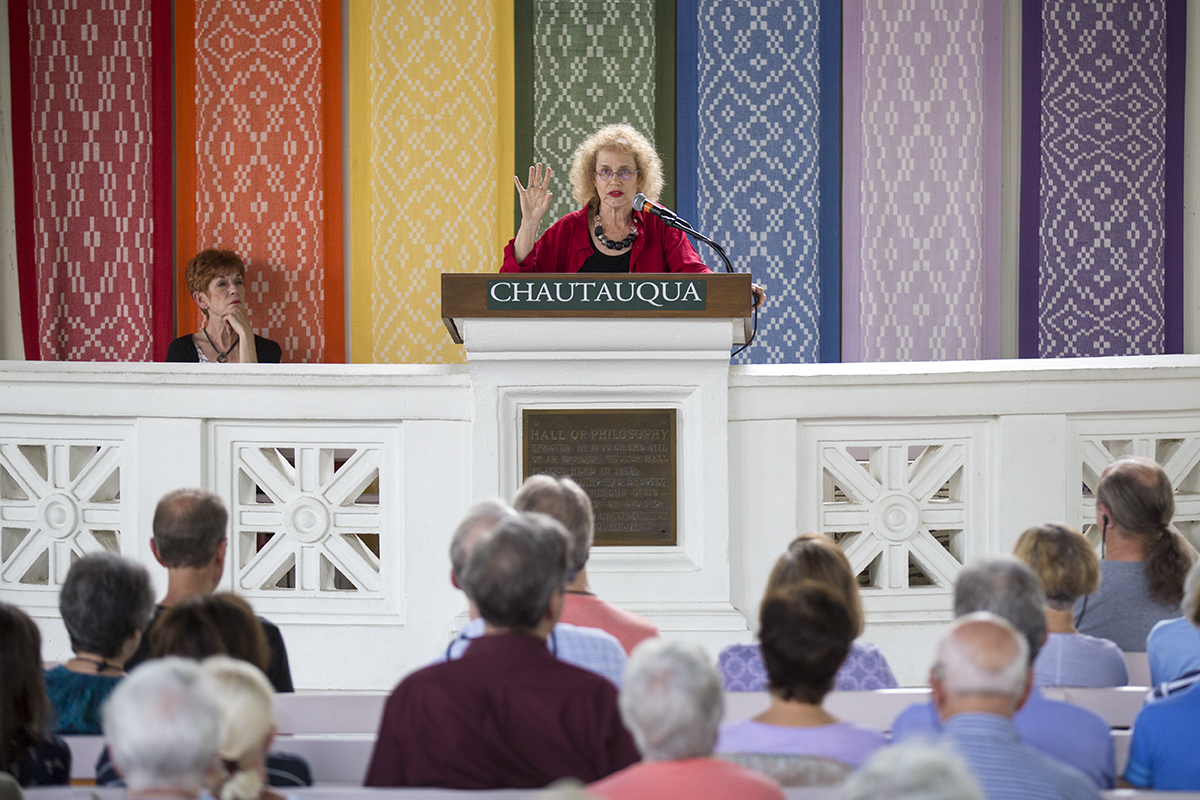 Hava Tirosh-Samuelson is fed up with this week’s afternoon lecturers.

She’s not anti-science. To the contrary, she has studied science and its intersections with religion and other fields for decades. But, as she told the Hall of Philosophy Thursday afternoon, she believes transhumanism is selling a false bag of goods and has turned science into a mystic cult whose goal is transcendence by means of human extinction.

The goal of transhumanism is transcendence, to make humans into something greater than they are, said Tirosh-Samuelson, director of Jewish studies at Arizona State University. Throughout the week, lecturers have tried to normalize transhumanist technologies such as artificial intelligence and robotic bodies by arguing they are just another step in a process that began hundreds of thousands of years ago with stone tools and continues today in the form of smartphones and reading glasses. Humans have always used technology to overcome biological limits. It is arguably what makes humans human.

But Tirosh-Samuelson distinguished between two types of transcendence: horizontal and vertical. Horizontal includes technologies such as glasses that seek minor improvements to the human condition. Vertical, however, is an attempt to end the human condition and make the species into something else entirely.

In seeking immortality and achieving superintelligence by merging with machines, Tirosh-Samuelson said, transhumanists seek the vertical transcendence of human biology and natural evolution.

“Transhumanism is connected to a larger attempt to control the evolutionary process. Some call it designer evolution, or radical evolution, or conscious evolution,” Tirosh-Samuelson said. “It’s all same thing: Human being has become its own maker. We are now making ourselves.”

And their ideas have to be taken seriously. Although transhumanism may seem fringe, with only about 5,000 adherents, Tirosh-Samuelson said they have an outside influence on intellectual thought. Ray Kurzweil, one of the forefathers of transhumanism, is a lead engineer at Google. Hans Moravec is on the National Science Board, allowing him to influence what research gets funded across the country. Transhumanists have set up institutions and even a university, Tirosh-Samuelson said, and their influence can now be seen in everything from the performing arts to video games and film.

“It doesn’t matter that transhumanists are a small group,” Tirosh-Samuelson said. “Their impact on our culture is massive.”

The problem is that Tirosh-Samuelson thinks their vision is apocalyptic, the world they seek to build dystopic. And even as they’ve grown in prominence over the last decade, she said, they’ve exhibited a startling lack of self-criticism.

Transhumanists seek to transcend their biological reality by uploading their consciousness into a virtual reality similar to the computer game “Half-Life,” Tirosh-Samuelson said. Adherents argue they can accomplish this because a person’s essence is really just specific neural pattern and that by copying that pattern, humans can live as machines. But Tirosh-Samuelson rejects the premise that humans are simply pattern, and doesn’t think that such a machine will actually be the same human that existed before.

“They basically want us to commit suicide in a sense,” Tirosh-Samuelson said. “To commit suicide so that it will make the human species disappear and a new species comes up and we are going to love it all. Actually, we won’t be here anymore.”

Even if consciousness does transfer, Tirosh-Samuelson said future won’t be paradise. A virtual world free of the body and free of suffering also means a world free of sex and desire, she said, as well as the failings and occasional suffering that give meaning to life.

The transhumanists also speak of the future as if it were inevitable, imminent and unwaveringly good, Tirosh-Samuelson said. But Kurzweil has already delayed his predicted date for the singularity from 2030 to 2045, and transhumanists have only now begun to contemplate that technologies such as artificial intelligence could have negative consequences.

All of which raises the question: If, as Tirosh-Samuelson contends, transhumanism is grounded in as much mysticism as it is science, why is it appearing today, in an age when rational thought is supposed to be at its apex? The answer, she said, is that we are living a post-secular age. Western life has bestowed unprecedented economic and technological progress, but it has also robbed many of the meaning that religion once offered.

Through transhumanism, in trying to make men into gods, those theorists are attempting to bring meaning back into the world, Tirosh-Samuelson said, and yet they are missing an essential element of those ancient religions: humility. For that reason, she said, transhumanism has no place at a humanistic organization such as Chautauqua.

“Chautauqua is looking at the human with certain criticism and a certain sense of humility,” she said. “And that humility, I would say, is totally lacking in transhumanism.”

Morning Worship Column: Lazarus a Messenger of God for Those with Eyes to See