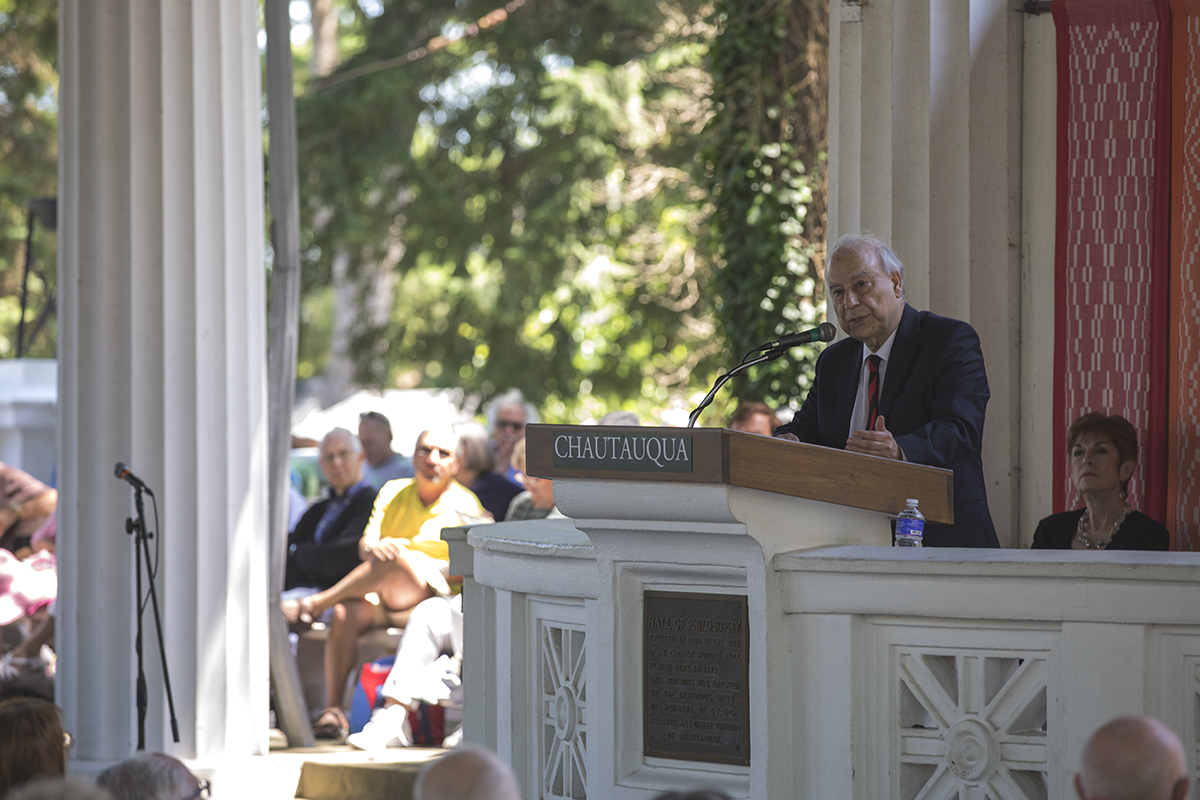 Former Pakistani high commissioner to the UK and Ireland Akbar Ahmed delivers his speech on "Being Muslim Today: Building Brides in an Age of Uncertainty" on Tuesday, July 18, 2017 in Hall of Philosophy. PAULA OSPINA / STAFF PHOTOGRAPHER

Winter 2001 was freezing for Muslims.

Akbar Ahmed1, former Pakistani high commissioner to the U.K. and Ireland, felt the wind’s chill, anyway. It was the season directly following the attacks on the World Trade Center, and all of America was speculating about the group responsible. Suddenly, it felt heavier to be a Muslim in the United States.

Ahmed gave his personal account of this time as part of his lecture titled “Being Muslim Today: Building Bridges in an Age of Uncertainty,” the second in Week Four’s Interfaith Lecture Series “Religion and Statecraft Today: The Soft Power of Global Peacemaking” Tuesday in the Hall of Philosophy.

His storytelling continued with the account of Daniel Pearl, a journalist killed by Pakistani terrorists — part of a “long, complicated, bloody chapter in relations” post-9/11. During his time at American University, Ahmed received a call from Judea Pearl, Daniel’s father. Pearl told Ahmed he wanted to begin a public dialogue about the incident. Eventually, this dialogue became global, with Ahmed and Pearl sitting on stages around the world, addressing crowds about injustice.

Ahmed realized an “almost Shakespearean irony of what is going on in the world” during these talks, as the two people who were supposed to be so different externally had so much in common internally.

Ahmed asked the audience to take a minute to consider why these events are still happening in the 21st century.

“We went through the First World War, the Second World War, Hitler, the Holocaust,” he said. “We said, ‘Never again, we have learned the dark lessons of history.’ If we are going to move ahead from this terrible period of history — our technology has taken us up to Mars, to the planets, to such advances in medicine — and yet we can’t live together?”

The nation, he said, is still as divided as characters in biblical times.

“We are constantly referring to Cain and Abel,” Ahmed said. “How can we overcome our own natures? Forget the politics, forget whether Trump is right, Trump is wrong, Hillary’s right — what can you do about it? Remember this: This country’s great because it’s great and defines itself by the standards that made it great, and that’s the Founding Fathers of this country.”

Ahmed said he has spent a lot of time studying the Founding Fathers and their contributions to early America.

“They attract you, they pull you, you want to be a part of this community that they envisioned, the society that they visualized,” he said. “That is your challenge. When the world looks at you, it doesn’t see you as Republican or Democrat or supporter of Trump or not; it simply sees you as an American and judges you by those standards.”

Ahmed said 2017 has been the worst year for minority attacks, including the death of Nabra Hassanen, a 17-year-old girl who was beaten outside a Virginia mosque by a 22-year-old man.

“As an anthropologist, I have told my class again and again … hatred is a slippery slope,” Ahmed said.

After the Holocaust, people thought the “bloodlust” exhibited by Hitler would vanish, Ahmed said. Instead,  displeasure toward other marginalized groups — Africans, LGBTQ people — increased. Similarly, the “ugly monster” of anti-Semitism still prevails today.

“Hatred is very dangerous,” he said. “It’s like a fire that cannot be contained.”

This hatred, Ahmed said, carries over to the treatment of those who wear turbans. Some people who put on the headwear are Sikhs, practitioners of what Ahmed called a “beautiful and peaceful religion.” Many Sikh friends of his have been told, “Osama, go home.”

When the world looks at you, it doesn’t see you as Republican or Democrat or supporter of Trump or not; it simply sees you as an American and judges you by those standards.”

“Americans just assume anyone with a turban and a beard is (a terrorist),” he said. “That not only reflects our world cultures and world religions, but also reflects on the nature of tolerance in our society today.”

There are also the events in Syria to take into consideration — “Muslims killing Muslims,” according to Ahmed. He said it devastates him to watch these people deliberately being targeted for their religious beliefs. And the illness is spreading to places like Yemen and Saudi Arabia as well.

“The Muslim world, which looks to Saudi Arabia as the nation that houses the two holiest places in Islam — they have taken the lead,” Ahmed said. “They’re using the greatest weapons of destruction to destroy the most defenseless, hungry, starving population in the world.”

Ahmed’s daughter has her Ph.D. in anthropology from Cambridge University and is determined to bring together Hindus and Jews for the purpose of interfaith dialogue. She also recently met mothers of Pakistani children, who were weeping over the tragedy inflicted on their youth.

“How do you talk to a mother who has lost a 10-year-old child?” Ahmed asked. “Can you say, ‘You’re a Muslim, the world hates Muslims, so we Muslims can be killed?’ ”

The Muslim community recently grieved the lynching of Mashal Khan, a 23-year-old student at Abdul Wali Khan University Mardan, who was said to be a “blasphemer” of Islam.

“Like all youth who are 18, 19, you have new ideas,” Ahmed said. “His sin, I suspect, was he had two posters in his room, Che Guevara and Karl Marx. Which of you has been strong enough to resist those two characters when you are in school and university? And yet, his punishment was death.”

At times, there is not even any reasoning to support these crimes.

Ahmed referenced several conflicts around the globe, including violence against the Rohingya Muslims of Myanmar and minorities in India being lynched by mobs over rumors of transporting cows, selling beef, or even consuming beef.2

The term “interfaith,” Ahmed said, is such a buzzword in today’s religious sphere. His friends, who he said “sometimes express themselves in slightly more colorful language,” have often called interfaith efforts a waste of time in the nation’s current religious climate. However, Ahmed disagrees.

“It should start with interfaith dialogue, (and) it should move to understanding,” he said. “We shouldn’t just be chatting with each other saying, ‘Yeah, we agree, your religion is somewhat like mine, but you see, we have these differences.’ We should really begin to study each other. Go visit a synagogue or a mosque or a church. Read about each other, understand each other, understand our histories. Where are we coming from? What are the challenges we face?”

He said he wishes people would be more inquisitive rather than exclusive.

“Ask us personal questions: ‘How do you feel as a Muslim?’ ” he said. “Don’t see us as a stereotype, don’t see us as a cardboard character. There are billions of Muslims and we are not disappearing, let me tell you that.”

It comes back to dialogue, he said.

Colleges and universities reached out to both Ahmed and Pearl in the hopes they could provide an interfaith message to students. The result was conversations between “two grandfathers talking with mutual respect, agreeing to disagree.”

This led to Ahmed’s belief in the most important thing of all — friendship. Friendship makes attacking one another difficult. Ahmed saw this play out right in front of his eyes when Daniel Pearl’s mother invited him to dinner — the first meal she had cooked since her son’s death.

“Think of the gesture she is making to a Muslim,” he said “Now, if she can do it, why can’t we do it without that sacrifice? That is friendship.”

Ahmed brought the audience back to the Founding Fathers — George Washington in particular. In his only published book, Rules of Civility and Decent Behavior In Company and Conversation, Washington wrote of ethical treatment of humanity, which was especially noteworthy as he created a new country.

“He’s not saying, ‘Kill them all, drop bombs, slaughter them, wipe them out, exterminate them,’ ” Ahmed said. “He’s saying the essence of an American is civility and decent behavior. My God, what an inspiring message.”

If there’s one thing to know about Thomas Jefferson3, Ahmed said, it can be learned by visiting the his gravestone. The inscription never says one word about his role as president.

“The measure of a man is how he or she sees himself at his death,” he said. “What have I left behind? How will prepare remember me? What is my legacy? Go to his tombstone and you will be stunned.”

All Washington included was a reminder of the statutes of religious liberty — that anyone of any faith can come to the United States and practice their religion, as long as they obey the law.

“(Interfaith) isn’t an artificial series of painful dialogues where you talk about your faith, I talk about my faith, both of us say, you know, ‘I’m not going to be converted by this fellow,’ ” Ahmed said. “That’s how we perceive it.”

There’s a statue of Jefferson at the University of Virginia, in which part of the statue includes an angel4 holding a tablet professing the core value of religious freedom. Underneath the headline fall the names Jehovah, Allah, Brahma, Ra, Atma, Zeus and God, the monikers for the higher powers of several religions.

Ahmed concluded his lecture with a portion of Alfred, Lord Tennyson’s poem “Ulysses.”

“To follow knowledge like a sinking star/ Beyond the utmost bound of human thought … Made weak by time and fate, but strong in will/ To strive, to seek, to find, and not to yield.”

“That, to me,” he said, “is the spirit of Chautauqua and the best of America.”