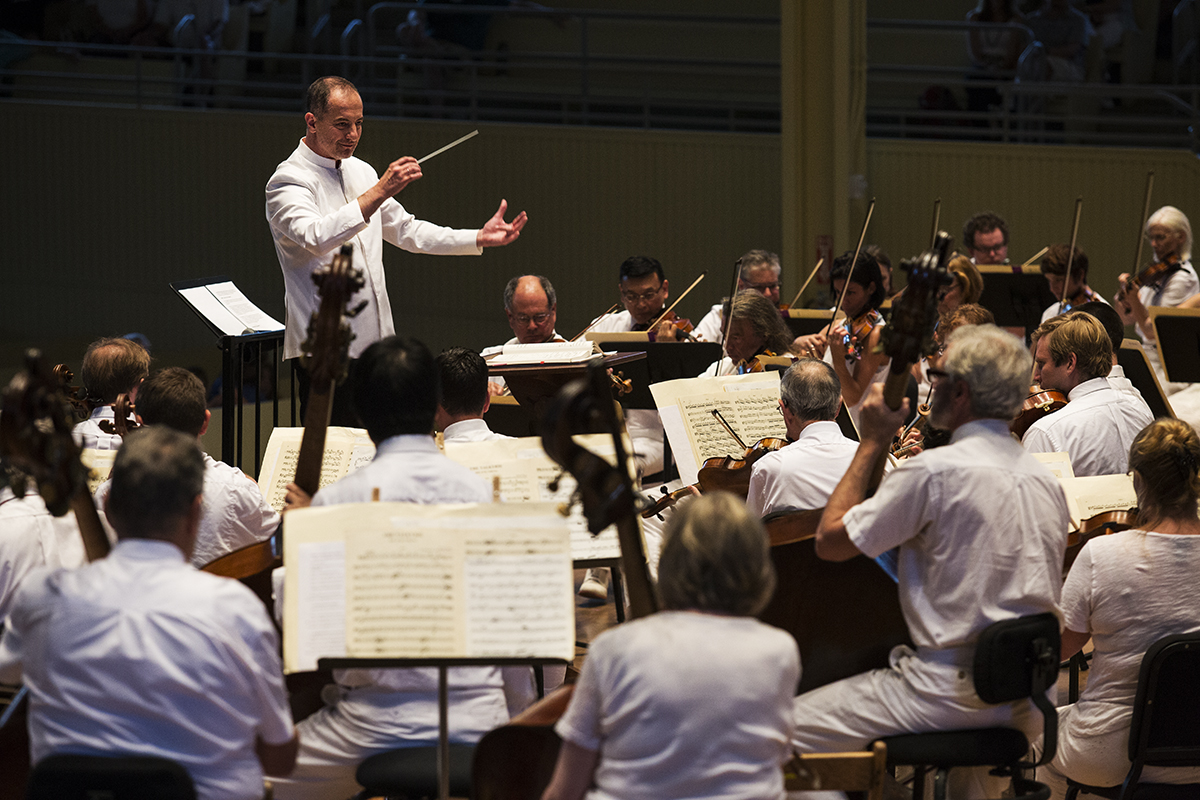 Imagine an assembly of world leaders packed into a gleaming new concert hall for a performance of Beethoven’s Ninth Symphony — the standard musical token of fraternity and global cooperation — as they did at the G20 summit in Hamburg earlier this month.

Now, imagine a conductor facing the audience and condemning world leaders from the podium. This past Sunday, on the fourth night of the BBC Proms in London, conductor Daniel Barenboim reportedly prefaced a performance of Edward Elgar’s Symphony No. 2 by stating that “Elgar makes the best case against Brexit.” Elgar’s symphony predates last year’s EU referendum by more than a century.

Music may still have a ceremonial place in global politics, but according to Chautauqua Symphony Orchestra Music Director Rossen Milanov, music doesn’t carry the political clout it used to.

“There was a time when music was actually important enough that it was considered a political weapon,” Milanov said. “Unfortunately, this isn’t the case nowadays.”

At 8:15 p.m. Thursday in the Amphitheater, the CSO will perform one of the most political and enigmatic works in the symphonic repertoire: Dmitri Shostakovich’s Symphony No. 5. On the first half of the program, violinist Bella Hristova will join the CSO for a performance of Astor Piazzolla’s Four Seasons of Buenos Aires.

During most of the 20th century, the governments of the United States and the Soviet Union took notice of political messages, perceived or real, in their artists’ work.

In the United States of the 1950s, composers and musicians were inevitably caught up in the dragnet of anti-communist sentiment. The classic example is Aaron Copland, whose music is a byword for American grandeur and patriotism. It appears anywhere America’s traditional values are invoked, from presidential inaugurations to campaign ads to steak sauce commercials on TV. Copland, who died in 1990, was also a gay Jewish communist sympathizer. At the height of the McCarthy hearings, he was reportedly being followed by the FBI.

In more extreme musical circles, composers suggested physical harm as a form of social protest. A 1969 avant-garde piece titled “One anti-personnel type-CBU bomb will be thrown into the audience,” by American composer Philip Corner, is performed, thankfully, by canceling the concert.

During the Stalin years, the Soviet Union’s approach to musical subversion involved strategically gaslighting artists to keep them in a state of perpetual fear.

“You would get praised one day, then the next week you get a very negative opinion about what you do,” Milanov said. “Only the strongest people could survive that kind of public bashing.”

Soviet composers, uncertain about their official standing in the eyes of the state media, responded in different ways. Sergei Prokofiev left the Soviet Union for a brief stint in San Francisco before returning to Moscow permanently. The result was tragic.

“With people such as Prokofiev, it didn’t work out very well,” Milanov said. “They simply crushed him.”

Things went differently for Shostakovich, whose visibility and popularity in the United States probably offered at least minimal protection.

“The only way they could get to him politically was to do something to his family,” Milanov said. “That was his greatest fear, for his son and wife at the time.”

Shostakovich’s problems with Soviet authorities began two years after the premiere of his opera, Lady Macbeth of the Mtsensk District. The action centers on a salesman’s unhappy wife, who is eventually driven to infidelity and murder. The opera was initially a hit in the Soviet Union and elsewhere. However, after public disapproval from Stalin and a scathing editorial in the state-run newspaper Pravda, the opera was banned and Shostakovich began a slow retreat into himself.

“It was an interesting evolution for him,” Milanov said.

Shostakovich retracted his Fourth Symphony, which was written around the same time as the opera.

He adopted a simpler, nationalistic style with “lofty ideas closer to what you might find in Beethoven symphonies or in more epic music like Mussorgsky,” Milanov said.

“In his 15th Symphony, the last symphony, you see this huge orchestra on stage, but they only play together for about two minutes in this 50-minute piece,” Milanov said, and the rest of the time, only small segments of the orchestra play together. “There’s a lot of that in the Fifth Symphony, particularly in the slow movement.”

Shostakovich didn’t completely abandon his previous musical style after the damning Pravda editorial. But he did walk a fine line, skirting the boundaries of what the state critics might consider “formalist” or seditious. The second movement of the Fifth Symphony features insolent guffaws from the woodwinds and clownish glissandi in the strings that merge into a kind of stuttering, manic-depressive waltz.

“The scherzo, of course, is a continuation of the satirical and grotesque styles he explored in the Fourth Symphony and his opera,” Milanov said.

One of the symphony’s most ambiguous moments is its ending.

“As far as I know, it’s the only piece that gives the conductor the ability to shape the message,” Milanov said. “It’s as if you were writing a book and then you have two chapters at the end: one which is tragic, and one which is happy.”

Of course, Shostakovich’s notes and dazzling orchestration don’t change from one performance to the next. Milanov finds the timpani part near the end of the symphony especially moving.

“It’s probably one of the most exciting timpani parts that I know,” Milanov said. “It’s sort of like God sitting in the middle of the orchestra.”

The message that will be conveyed really depends on how fast or slow the conductor chooses to take the ending.

“The majority of the orchestra gets stuck on playing one note and the brass are doing this forced version of the principal theme as a big, triumphant chorale,” Milanov said. “If you hear it just a little bit slower, that creates an incredible amount of tension.”

Under Milanov’s baton, the ending is neither hopeless nor triumphant.

“It shows more defiance than anything else,” Milanov said.