In its next session, the United States Supreme Court is scheduled to decide several highly consequential cases that have religious underpinnings, including the constitutionality of the Trump administration’s travel ban targeting six predominantly Muslim nations and the case of a baker who objected to making a wedding cake for a gay couple on religious-freedom and free-speech grounds.

“The court stands at the absolute epicenter of the dialogue on the role of faith in America,” Dahlia Lithwick, a legal analyst and columnist for Slate and Newsweek, told Chautauquans at Wednesday’s morning lecture in the Amphitheater, which continued the week’s theme, “A Crisis of Faith?” And she brought up an issue that she said has been studiously avoided: how the Supreme Court’s justices are influenced by their personal religious faith.

“How can we not talk about how faith shapes and informs them?” she asked the audience.

Lithwick cited a number of cases in which religious faith was at the heart of an argument. In 2007, the court ruled 5-4 to uphold a lower court’s ban on partial-birth abortion. The decision came several years after the court had struck down a similar ban by the same margin. The difference, Lithwick said, was that Justice Sandra Day O’Connor, a Protestant, had retired and been succeeded by Justice Samuel Alito, a Roman Catholic.

At that time, there were six Catholics and three Jews on a Supreme Court that for most of its history had no Catholics or Jews and then, in the 20th century, “a Jewish seat and a Catholic seat.”

Today, with Justice Neil Gorsuch, an Episcopalian who was raised a Catholic, having replaced the late Justice Antonin Scalia, a Catholic, half of all of the Catholics ever on the Court are serving now, Lithwick noted, adding that of the eight Jews to have ever served, three are doing so currently.

She also compared the court to a “national church,” with robed oracles swanning around and whispering inside a building that looks like a temple. Yet, in summing up, Lithwick said she did not think justices were swayed by their individual faiths as much as they were by the “tools of their faith.” They could overcome religious and partisan biases because they are “part of something much more urgent and much more important than just winning.”

A majority of Chautauquans leaving the Amp after her talk seemed to rule in Lithwick’s favor, but there was some dissent.

“I was really impressed, but I didn’t agree with everything she had to say,” said Thomas Pistole of Durham, New Hampshire. “The fact that there are five Catholics on the court who usually vote the same way, it’s hard to believe that their faith doesn’t influence them. It absolutely has an impact.

“I don’t see how you can have a faith — anymore than you have an ethnicity or sexual identity — that doesn’t an effect you and how you think. I’m not sure I can say how that works in individual cases.”

Doris Herron, from New Jersey, found Lithwick “well-informed and interesting,” and she and her friend Anne Wolfe of Jamison, Pennsylvania, agreed with her thesis that faith has an impact on jurisprudence.

“I don’t see how the justices could not be influenced by their faith, but I hope it isn’t the only thing,” Herron said.

Cheryl Roberto and David Magee are from Columbus. Both said they were pleased by the challenging nature of the week’s programming.

“This kind of 10:45 a.m. lecture is what has been missing in the past couple of years,” Magee said. “It’s much more likely to stimulate conversation. I like the National Geographic lectures and programs like that; they’re informative and entertaining. This is intellectually stimulating.”

Roberto found the lecture “thoughtful and enlightening” and agreed with the consensus that all judges, including Supreme Court justices, are human.

“She did a brilliant job explaining complex ideas in lay language,” said Mark Averbach, an attorney from Cleveland. “All judges are human beings. How can we not be informed and influenced by who we are?”

Dot and Phil Brown, longtime Chautauquans from Macon, Georgia, have attended all of the main lectures and discussions of the week.

“It’s been very provocative,” Dot Brown said. “Some of it has taken me to a discomfiting place. I find we are talking about trends that I haven’t been able to pin down. The world that my children and grandchildren live in is a different place.”

“It’s what Chautauqua is for,” said Phil Brown. “These people tell you what’s holding up the top and what’s underpinning the bottom.”

At the Hall of Philosophy later in the day, Greg Epstein, the author of Good Without God: What a Billion Nonreligious People Do Believe, faced a tough crowd.

As Bill Moyers, the moderator of this week’s Interfaith Lecture Series pointed out in his introduction, Epstein is not like such strident atheists as Sam Harris, Richard Dawkins and Christopher Hitchens. He does not condemn theists and, in fact, seeks dialogue and common ground.

“Interfaith dialogue is important and inspiring,” Epstein said, “and always it needs to include atheists and humanists like myself.”

But he’s still an atheist. And at one point in his lecture, when he described God as “the most influential literary character ever created by human beings,” many in the audience visibly winced.

Epstein is the humanist chaplain at Harvard University, where he said there are “more self-identifying atheists and agnostics than all Christians combined.” He also cited findings that 20 percent of Americans are nonbelievers and that 35 percent of young people claim no religious affiliation. The demographics, he noted, are on his side.

Atheism is much more than being against something, Epstein said. What it stands for are reason, compassion, creativity, feminism, environmentalism and other principles, he added.

“If we are defined by what we are against, we are in company with some seriously scary, bad people,” Epstein said, calling out in particular the so-called alt-right, one of whose leaders, Richard Spencer, said after the election of Donald Trump, “We’re going to party like it’s 1933.” He warned that right-wing racists are working to recruit young people who are drifting away from organized religion.

Epstein called for the building of new communities built on compassion and love, and urged his listeners to work together to “create purpose and meaning through human relationships.”

“I thought it was fabulous, extremely well-articulated,” said Demaris Wehr from Calais, Vermont, and Martha’s Vineyard, who has been coming to Chautauqua for many years. “I consider myself a Christian, but I found myself in agreement with everything he said. My only caveat would be, ‘What is your source? What do you draw on for your inspiration?’ He didn’t answer that.”

Joe and Diana Estill of Orlando, Florida, describe themselves as “strong Christians.” They weren’t persuaded by Epstein’s arguments, but they both agreed that atheists can be “fine, moral people,” as Diana put it.

“I think this whole series has been worthwhile,” Joe Estill said. “This man was trying to voice his humanism and atheism, but he had a hard time expressing it.”

“I wasn’t convinced he understood his humanism,” Diana Estill added. “But we came to listen.”

Bob and Gail Brimbecum live in Bowmanville, Ontario, but have been coming to Chautauqua since 1975.

“The thing that surprised me was that he didn’t try to convince us, he wasn’t trying to tell us that you’re all wrong and I’m right,’’ Gail Brimbecum said. “He was saying, ‘We’re all in this together.’ ”

“I don’t argue with most of what he said, but this business of working together. I don’t know,” said her husband. “On the other hand, this has been without a doubt one of the most interesting weeks we’ve spent here. The kind of dialogue and discussion that happens here doesn’t happen a lot.”

Donald Wheeler of Ridgewood, New Jersey, is a Baptist minister with a doctorate in sociology.

“I was deeply moved; it took tremendous courage,” he said. “I’ve been struggling with faith and reason my whole life. Compassion is the key. He said, ‘Please include us in your interfaith dialogue,’ and, of course, we should. We all have more in common than we do differences.” 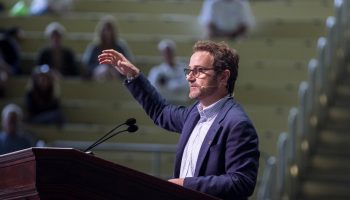 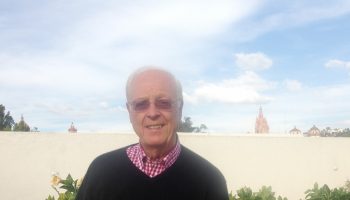 Eric Meyers to Discuss Jesus’ Commitment to Judaism, Stronger Than Once Believed 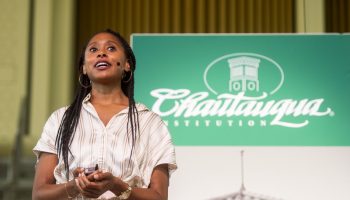 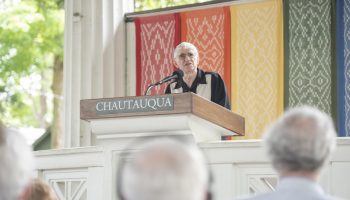 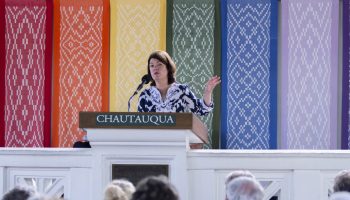