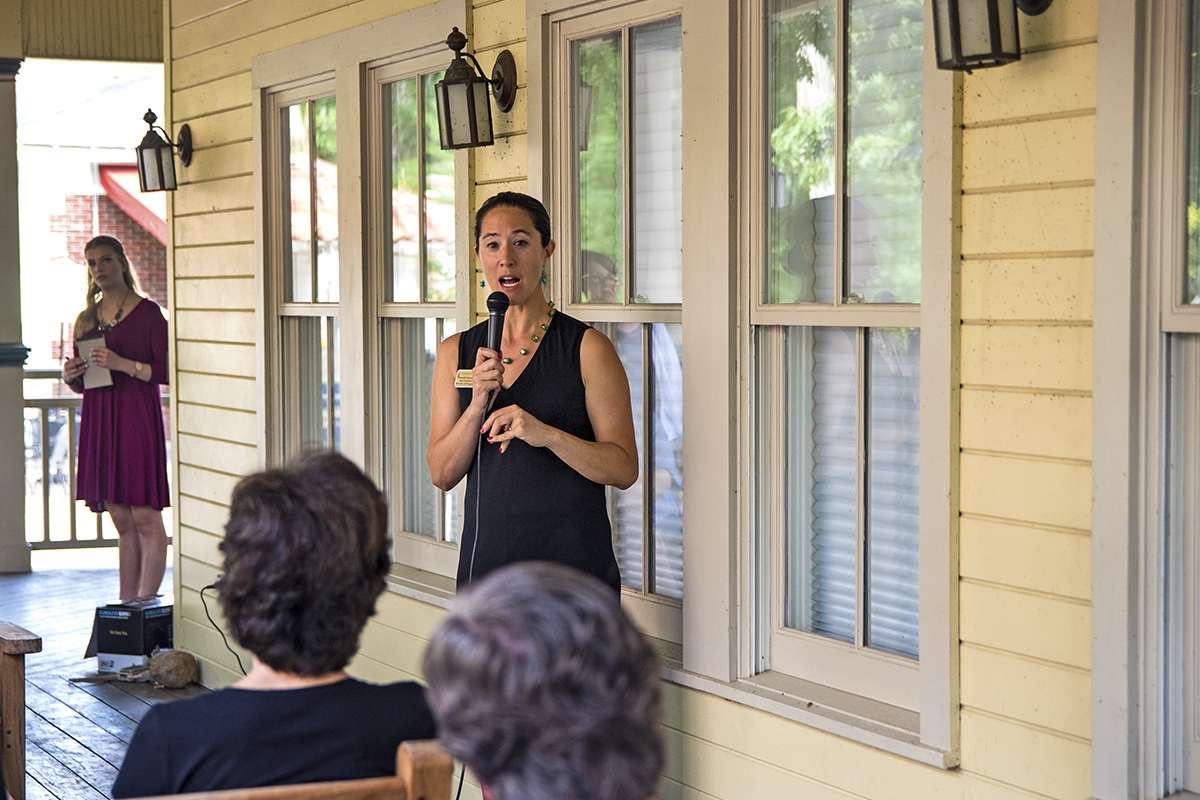 Deborah Sunya Moore has no problem admitting that four years ago, there wasn’t an articulated mission for the arts at Chautauqua Institution.

As Moore and a committee of community, trustee and staff members searched for a new music director for the Chautauqua Symphony Orchestra — the Institution had been without one for four years — something became clear.

“During that search, we realized that we didn’t have a mission,” Moore said during her talk at the Institution Leadership Porch Discussion on Wednesday. “It gave us a chance to really look at ‘What are the arts at Chautauqua, and what’s our purpose?’ ”

Moore called it a “pivotal moment,” catalyzed by the search for a permanent music director.

“If you get the right arts leader, they are a leader not only for that particular organization or program or department; they really become leadership for Chautauqua Institution,” said Moore, vice president and director of programming. “That’s how I see every single one of our artistic directors — they are also leadership for the Institution and our vision for Chautauqua.”

“The overriding vision there is about the balance between tradition and innovation,” Moore said. “It’s about being relevant in community, right here at Chautauqua, but it’s also community outside of the gates locally, in this local Chautauqua Country region. And it’s also community nationally, when we talk about our artistic excellence and our resonance as far as being an organization that has national impact.”

Moore said it was that vision that not only led to the selection of Milanov, but to select Steven Osgood as the general and artistic director of the Chautauqua Opera Company, promote Andrew Borba to artistic director of Chautauqua Theater Company, and appoint Alexander Gavrylyuk as artistic adviser for the Piano Program. It also spurred them to, according to Moore, start “evolving our dance platform.”

“I feel that what the arts have been reflecting is that commitment to balance between tradition and innovation,” Moore said. “I think that’s really what we’re looking at as a whole institution. How do you stay committed to this mission of exploring the best in human values, but do it in a way that’s current and relevant, and continues to attract new people into our community?”

Moore shared various changes across the arts platforms at the Institution. The CSO three seasons ago began offering Sunday matinee performances that are free and open to the public. Its most recent matinee featured dancers from the School of Dance, singers from Chautauqua Opera and actors from CTC. Moore mentioned that she’s “open to the idea of considering more concerts at that time.” The CSO also features “Into the Music” performances that give the audience an opportunity to ask questions after the show, and the conductor a chance to speak to the music throughout the performance.

“We really believe that our arts are much more than the mainstage production,” Moore said. “We’re trying to make the arts more accessible and more available to everyone.”

This is the second season that Chautauqua Opera includes chamber operas, which Moore described as a “much more contemporary, bolder choice.”

“We’re not replacing one of those favorite operas with it, but we’re trying to add to that performing so that we have that depth of diversity within opera,” she said.

There are Afternoon of Song recitals in the Athenaeum Hotel parlor and “Opera Invasions,” which Moore said really enables them to reach the community with the arts. The recent “So You Think You’re Louder Than an Opera Singer” competition at Boys’ and Girls’ Club was a hit. Some opera singers, including Osgood, will run along — and sing — with runners during the Old First Night Run/Walk.

Singers from the Young Artist and Voice programs, orchestra ensembles and dancers have also staged pop-up performances to entertain crowds waiting to enter the Amphitheater for popular weekend performances.

I feel that what the arts have been reflecting is that commitment to balance between tradition and innovation,” Moore said. “I think that’s really what we’re looking at as a whole institution. How do you stay committed to this mission of exploring the best in human values, but do it in a way that’s current and relevant, and continues to attract new people into our community?”

“We’re also trying to think, where else can we put the arts so that this community is alive with the arts?” Moore said.

For dance this season, that’s looked like performances by Ailey II and a community barre session, both on Bestor Plaza, and more opportunities to engage with the dance companies through family master classes, open rehearsals, lectures, Q-and-As and more.

“We have this rich partnership with Charlotte Ballet which we don’t want to lose,” Moore said, “and yet at the same time, when we look at our arts mission and we talk about diversifying and broadening the arts at Chautauqua, it probably means not just one dance company, but more than one dance company.”

Moore worked to plan an immersive three-day residency with Ailey II, who she said “took Chautauqua by storm.” Part of their residency included hosting master classes for advanced ballet students.

“Even for our guest companies, if they can stay for more than one day, what we’re looking at is being more than a performing arts center,” Moore said. “We want to put them in the community when we can.”

Moore then shifted her talk to share how her department has been working to offer more year-round programming. The Young Playwrights Project, which goes into Chautauqua County schools to teach third and fourth graders, has now expanded to five schools and has three more schools on the waiting list. In the winter, the students come onto the grounds to have their plays read aloud by Chautauquans. A select number of plays are also produced and performed by CTC that the students get to see in June. The Institution also offers its year-round I Can Drum program for students with disabilities in 23 school districts with the Board of Cooperative Educational Services.

The art galleries are opened a week before the season starts so that area students can come to experience them. Moore said around 450 students came and were able to be exposed to art, which she said is especially important when living in a rural area where access can be an issue.

“We think it’s important work to do. We’d like to do a lot more of it,” Moore said. “It also means helping raise the kids right here in our county. We hope that you’re proud of it, that you’re proud to be at an institution that believes in that work as well.”

During the Q-and-A and comment portion, a community member raised a concern about the future of the Logan Chamber Music Series. The series, which is supported by a donation from the Harry A. Logan Jr. Fund for the Performing Arts rather than an endowment, will enter its last year of funding next year. Moore said the Program Office is working to continue to support the series by having people donate to the Annual Fund on its behalf, and eventually getting the series endowed so that it’s not in a “precarious position.” Moore currently runs the series on a shoestring budget of $50,000, which covers the cost of staff salaries and nine performances.

Chautauquan Tim Hollins asked if it’d be possible to have more chamber music performances in the Hall of Philosophy, which he described as the “most gorgeous space on the grounds.”

“I love that idea,” Moore said. “I need to try a group and see what it sounds like.”

Moore added that the Institution is looking for ways to create more performance opportunities for the faculty within the School of Music. Elizabeth Schneider asked how more awareness can be brought to the Visual Arts at Chautauqua Institution and its galleries.

“We are re-envisioning VACI,” Moore said. “One of the things that keeps coming up over and over again is ‘How are the visual arts represented in our community?’ ”

Moore mentioned the lack of public art outside of the galleries. Dan and Linda Silverberg donated Jun Kaneko sculptures to the Institution, which Moore considered its first major public art donation.

“I hope that we see more of this in the future — that the visual arts are not only in those galleries that are a little hard to find, but that when you walk on the grounds, five years from now, is that we see art,” she said.

Moore assured community members that pursuing the balance of tradition and innovation is an inclusive effort.

“It doesn’t mean losing what we love, it means adding onto that,” Moore said.