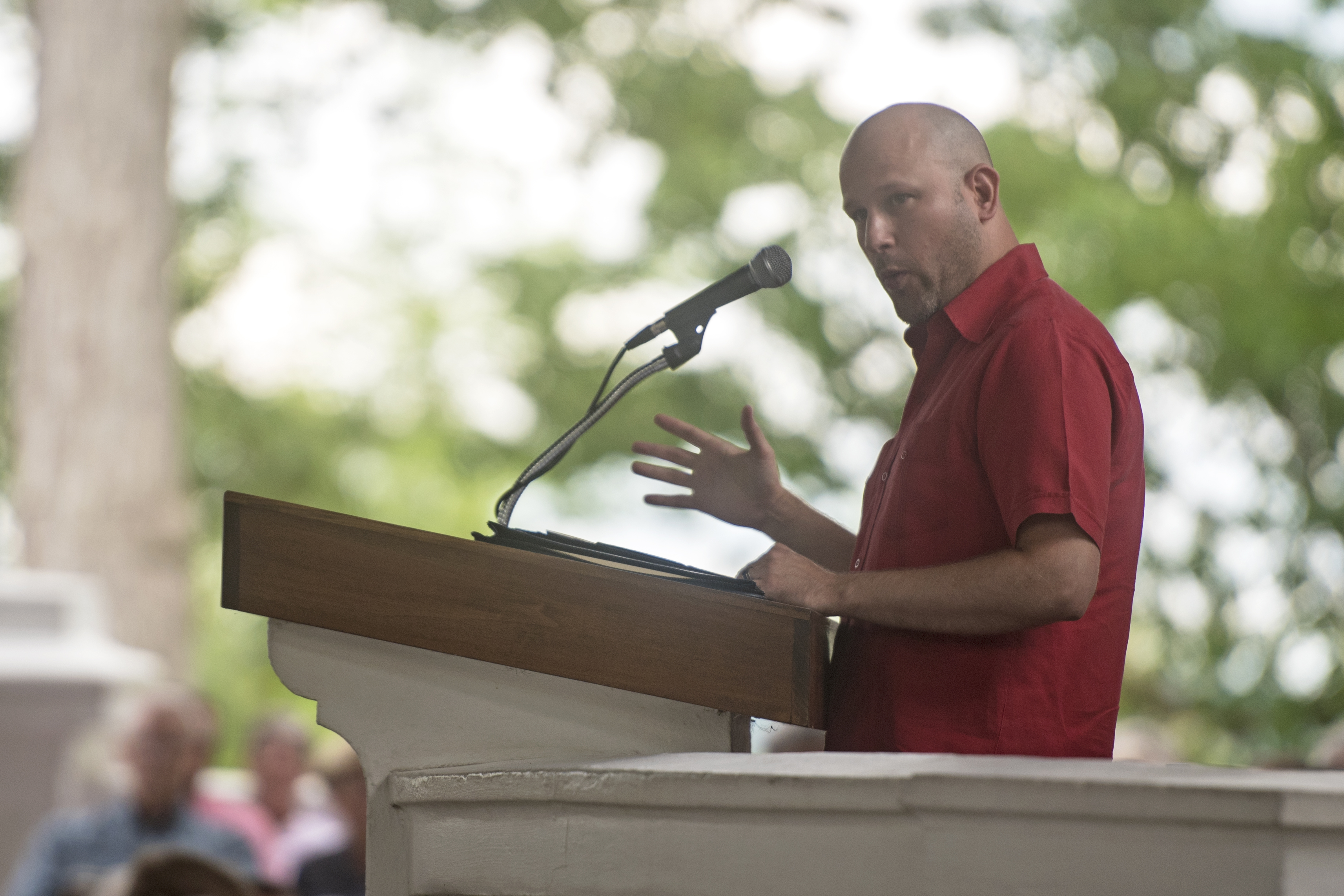 Greg M. Epstein speaks at his lecture "Good Without God in the Era of the Alt-Right?" on Wednesday, July 12 in the Hall of Philosophy. Epstein is Humanist Chaplain at Harvard University. OLIVIA SUN/STAFF PHOTOGRAPHER

In his essay titled “Once More to the Lake,” E.B. White, author of Charlotte’s Web, wrote about the “dizzying feeling” he experienced when he and his father would take a trip to their Maine cabin. At one point, White could no longer distinguish whose leg was whose because he felt such a connection to his father.

The second story was about climate journalist and mother Madeline Ostrander, acting as a member in the Conceivable Future project, who expressed her worries about bringing new life into the world due to predictions for global crises by the year 2050.

Epstein, Harvard University’s humanist chaplain, defended modern humanism in his speech “Good without God in the Era of the Alt-Right?” as part of Week Three’s Interfaith theme “Crisis of Faith?” Wednesday afternoon in the Hall of Philosophy. Broadcast journalist Bill Moyers joined Epstein for an interview after his speech.

So, which story describes Epstein? Both of them, he said.

These anecdotes exemplify a crisis of faith — otherwise known to Epstein as a loss of confidence in the future. According to a study done by the The Harvard Crimson, there is a larger atheistic and agnostic population at the university than all of the Christian denominations combined. This, Epstein said, reflects a generational trend. He wrote about this, along with what it means to prosper as a humanist, in his book Good without God: What a Billion Nonreligious People Do Believe.

“To live good lives as non-religious people, we need positive responses to human problems like climate change and nuclear weapons and terrorism, as well as to personal struggles: love and death and searching for meaning in life and meaning in relationships and the vulnerability we all feel around these things,” he said, “because at any moment, anyone of us can get sick, we can die, we can lose a loved one, we can have our dreams and our plans shattered.”

He said living sans God is an attempt to come to terms with these realities. And the best way to do this is living within a community, which, Epstein said, is the only way nonreligious people can provide a “meaningful and influential alternative to theistic religion.”

“At the Humanist Hub, the community center we founded in Harvard Square, you won’t see plaques or monuments about the gods we disbelieve in or the theological arguments we disagree with,” he said.

Instead, their walls list their positive values: creativity, integrity, equality and mindfulness, just to name a few.

A decade ago, most of what humanists did was listen to lectures. They examined religion and eliminated the parts they disagreed with, which was everything but the concept of the sermon. Now, the Humanist Hub promotes music, poetry, community meals, advocacy and community service.

But Epstein said they’re having a hard time staying optimistic about issues like climate change.

“We’ve elected an administration that not only does not care about this problem, but is actively worsening,” Epstein said. “We’re afraid not only of Islamic terrorism and North Korea, but also of homegrown, white-bread terrorism right here in the West. We no longer have confidence that our own government is not colluding with our chief global enemy.”

Crisis, he said, stems from what he calls the “direction of the lifeboat.”

“If you believe you’re paddling in the right direction, you may be thirsty, you may be tired, you may be Sisyphus himself, but you’re more likely to be resilient in the face of your fear because you have some agency and you’re doing what you can,” he said. “But if you have no idea where you’re headed, or how to get yourself pointed in the right direction, maybe you’re hoping you’ll be rescued, but if you’re not confident that’ll happen, your mentality is different. At that moment, you’re not just afraid, you’re in crisis.”

There is a communal crisis among humanists of feeling like “outsiders or iconoclasts” because of their opposition to so many American ideals.

“Smugness is a luxury we can’t allow ourselves today if my community simply is defined by what we don’t believe. … Sadly, we are today in the company of some truly bad and scary people,” Epstein said.

A threat to the humanists’ reputation are people like Richard Spencer, “America’s most recognizable neo-Nazi,” who called on people to “party like it’s 1933” when Donald Trump was elected, and has ended several public appearances with the “heil Hitler” salute.

“(The alt-right) is generally considered to put a polished, mainstream, rationalistic face on racism, sexism, anti-semitism, homophobia, xenophobia and white nationalism,” Epstein said. “They use these sophomoric internet memes with cartoon frogs, fashion and tattoos and macho rituals … (for) white men who are in the midst of an identity crisis of their own, by the way, to think that they are genetically superior to others, to think that this is a scientific form of racism.”

Despite Epstein’s disdain for the movement, he said white supremacists treat humanists better than most outsiders to the movement, “fawning over (them) and courting atheists.”

And despite his opposition to being recruited by the alt-right, he said this doesn’t mean religious people are off the hook.

Epstein said he doesn’t want people to ask him whether he believes in a god. It’s better, he said, to ask what he does believe — what his principles are, what he stands for. This question is what inspired his book title, Good without God.

“That’s not a polite, intellectual question,” he said. “It’s prejudiced. In this day and age, it’s most like discrimination or marginalization. Reason and compassion are more than enough to live well and meaningfully.”

Despite this set of humanist values, sometimes it can be hard to pinpoint an identity as a whole.

Smugness is a luxury we can’t allow ourselves today if my community simply is defined by what we don’t believe. … Sadly, we are today in the company of some truly bad and scary people.

“When we are asked if we are religious, we say no, but when asked ‘What are you, then?,’ we stare blankly,” Epstein said.

Exposing fears, debating ethics and discussing life’s difficulties, Epstein said, are significant pathways to “one of the meanings of life.”

“The glass isn’t half empty or half full, the glass has four ounces in it, and we’ve got to use all of our reason and our compassion to do the very best we possibly can with those four ounces,” he said. “The only way to get there is one day at a time, one moment at a time, one ethical debate and journalistic inquiry at a time.”

In practicing this sharing, though, he’s recognized some of his own vulnerability, despite the formulaic nature of humanism.

“In the face of this fast-changing world, I look around at the community that we’ve built — I’m so proud of it — but I wonder, is it enough?” Epstein asked. “Because in a world changing so quickly, where there’s so much to do, where there (are) so many policies and people to influence, it sometimes feels that building one local congregation is like bringing a water gun to a forest fire.”

“What do you mean about a human being being good?” he asked.

Epstein said good people must use their “faculty to think” to foster solid relationships, as many and as often as they can. By coming to terms with the difficulties of humanity together, “that is the closest to true good” Epstein has experienced.

In fact, Epstein referenced a book by psychologist Susan Pinker, which stated that face-to-face interaction is more vital to health than a proper diet, good exercise habits, et cetera.

“Do you take any inspiration or guidance from the Ten Commandments?” Moyers asked.

The Christian set of morals, Epstein said, “get a vote but not a veto.” He said one “overarching moral standard” was unfair to people encouraged to create their own ethics.

Epstein wants to pass this humanist mentality onto his son, Axel. In other words, he wants his son to see the glass with four ounces.

Epstein’s life was changed when his son was born and the baby wrapped his finger around his. But this is not his “happily ever after.”

“It’s realistic love, and when you recognize that realistic love is enough, you can set aside some of (your) worries that we have to have perfection in order to live. We don’t,” he said. “We can just love one another at our human best, and that is quite good and it’s worth fighting for.”

Morning Worship: God calls us to ‘get up and move; salvation is dynamic,’ Fry Brown says