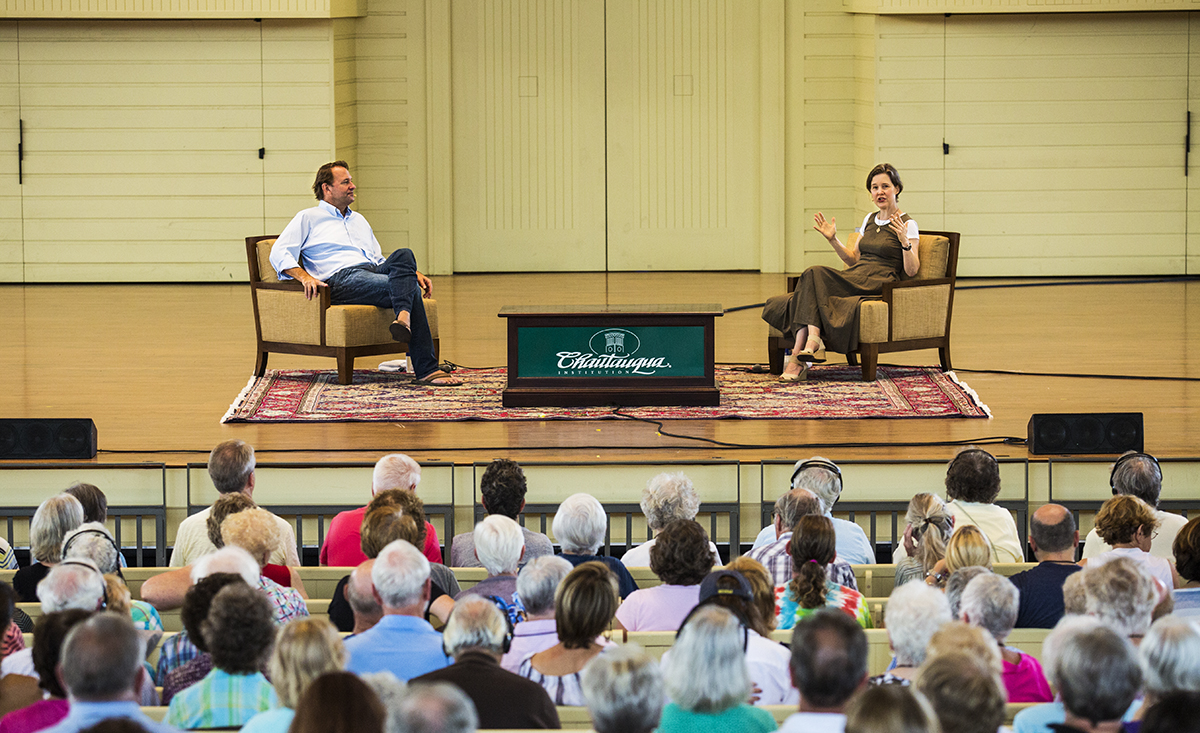 Michael Ruhlman, author of "Grocery: The Buying and Selling of Food in America," discusses the importance of food with author Ann Patchett Tuesday, Aug. 22, 2017 in the Amphitheater.

When Michael Ruhlman and Ann Patchett sat down to talk about food, they had a lot of ground to cover.

“I feel like we could talk for eight hours without stopping because food is just the centerpiece of so much of the national dialogue,” Patchett said.

“We take it for granted, though,” Ruhlman noted. “We (took) it for granted for so long. This is why it’s so important to talk about it now.”

Though they came together to talk, each half of the duo is a writer by trade. Patchett has authored three works of nonfiction and seven novels, one of which — Commonwealth — is one of this week’s Chautauqua Literary and Scientific Circle selections. Ruhlman, meanwhile, has written more than 20 books, primarily focused on food and cooking. His most recent is Grocery: The Buying and Selling of Food in America.

And speaking Tuesday morning in the Amphitheater during Week Nine, “At the Table: Our Changing Relationship with Food,” it was on that very institution — the grocery store — that they would focus.

“Tell me why you love grocery stores,” Patchett prompted.

For Ruhlman, it all comes down to cooking — not just as a means of physical nourishment, but as an aspect of family and community building.

“We’ve largely given up cooking, in big ways, at our own peril,” Ruhlman said. “And so in order to encourage people to cook more, how important cooking was, I had to know where this food in my grocery store is coming from.”

To him, the fact that nearly every type of food is available under one roof, often for cheap, is amazing. And from Heinen’s (the small regional chain he focused on in Grocery) to Amazon (the e-distributor changing the grocery game from the ground up), it’s an industry he wants everyone to understand.

“Where is all this food coming from?” Ruhlman asked. “And what does it mean?”

Intellectual curiosity aside, there’s also a more personal impulse at play: Ruhlman’s late father was an avid grocery-shopper, so the subject provides a means of paternal reconnection after death.

And, as if echoing the love for food his father instilled in him, Ruhlman now tries to do the same thing with his own children.

“It’s a way to talk with my kids about food,” Ruhlman explained.

Turning from the industry’s social implications to its economic ones, Patchett asked what the rise of food-by-mail means for the Heinen’s of the world.

Especially now that Amazon has purchased Whole Foods, and all the stores and supply chain infrastructure that that entails, Ruhlman expects an imminent change in how people acquire their food.

And for more traditional grocers, it’s adapt or die.

“Grocery stores are a fascinating thing; they combine two business models,” Ruhlman said. “They have a mercantile model that gets stuff in, they merchandise it, they send it out. They have a manufacturing model: they get product in, transform that product, and sell it as something different. They are basically turning into restaurants-slash-food purveyors.”

And if Amazon combines that function with its core shipping purpose, it could spell big changes for the entire notion of brick-and-mortar grocery stores.

“OK, so my Whole Foods in Nashville, Tennessee — do you mean that they will be taking orders and sending (boxes) of cereal out in the mail?” Patchett asked.

To some degree, Ruhlman said, Amazon already does this. The change will be that they can now deliver prepared foods, too.

“Is that something that (only) rich people are going to do?” Patchett asked. “I mean, it doesn’t seem that this is really applicable to everyone.”

That’s the case currently, Ruhlman said. But one day, it could actually be a big boon for low-income communities.

“My hope would be that it would serve people who live in a food desert,” Ruhlman said.

About 23 million Americans live in food deserts, he explained, where they lack access to basic nutrition and produce. And the negative health impacts on them are significant.

“It’s a problem, and it could be theoretically solved by Amazon’s delivery distribution system,” Ruhlman said.

Of course, that’s not without its own downside. The enormous amount of packaging waste produced by food delivery services like Blue Apron, Patchett noted, has a real environmental impact.

The ease in home cooking it allows for is a big plus, Ruhlman said. But that only matters if people actually put forth the effort to cook meals, and that doesn’t seem to be a very common practice nowadays.

“There’s an argument that cooking made us human,” Ruhlman said. “It was the actual activity that allowed us to triumph over our upright hominid ancestors. … (It) allowed us to form communities, and this allowed us to succeed. (But) we stopped cooking in (the) 1950s and ’60s, and we’ve gotten sick. And I think that we need to go back to cooking our food.”

This is hard, though, when an entire generation has grown up unexposed to home cooking.

In a society-wide sense, Ruhlman said, it is hard.

“We’re trying to relearn something that shouldn’t have gone away in the first place,” he said.

But the act itself? Not so much.

“Cooking’s not that hard,” Ruhlman said.

“It is!” Patchett interjected.

“Stop it!” Ruhlman replied. “How hard is it to make an egg?”

“Yeah, an egg, (but) that’s not cooking,” Patchett said. “I make dinner every single night and it grinds my soul to death.”

Getting back to their original discussion, Patchett asked what the food landscape will look like when “the middle is gone” and all that’s left is the boutique and the bare essentials.

“You can go up and buy a quart of milk in a drug store; we didn’t used to be able to do that,” Ruhlman said. “All that center stuff is going to go away. It’s going to be delivered to your house through the mail … and grocers may very well come back to the original days when they were purveyors of specialty goods that no one else could get.”

Places like Heinen’s, he predicted, will mainly carry the finest wines and cheeses and meats. Amazon-type businesses will have all the essential commodities.

Enjoying good food is one thing, though. Getting nutrition from it is another.

Patchett grew up around the women’s magazine industry, constantly cutting out different foods from her diet based on articles about their supposed unhealthiness.

But the question shouldn’t be one of health, Ruhlman said. What matters is nutrition.

“We need to think differently about food,” he said. “And then we have to know where to shop for food.”

And as for those magazine articles?

Dairy fat, for instance, isn’t unhealthy in small amounts. But something like fat-free half-and-half, as Ruhlman once saw a woman buy, just replaces that fat with corn syrup — a type of sugar that is, indeed, bad for you.

“We have been given bad information for decades,” he said.

And whose fault is this?

“The lobbies in Washington are very powerful,” Ruhlman said. “And (the) sugar industry, as we now know, was hugely influential in making the ‘fat is bad’ (narrative) and steering research away from looking at sugar. So it’s very bad; we have to be skeptical of everything.”

But at the same time, reducing eating to pure biomedical science is a sort of defeat in and of itself. Health is important, but so is happiness.

“We’ve started treating our food like medicine, and I think that’s dangerous, too,” Ruhlman said. “It’s taken the joy out of food. Food should be joyous. It should be shared. It should be enjoyed.”

This isn’t to ignore the real obstacles that get in between people and good food, of course. Time, money, allergies — not everyone can cook and eat a nutritious meal every single night.

However, they can take steps in the right direction.

“My suggestion would be: one meal a week,” Ruhlman said. “Shoot for that. Teach your children how to cook basic food. Have them help — they’re free labor.”

Or, Patchett suggested, cook for the whole week over the weekend and save it for each mealtime.

That’s still work, of course. But the benefits, both physical and emotional, are self-evident.

“Anything that’s really good for you takes work,” Ruhlman said. “We have to stop demanding everything be so convenient.”