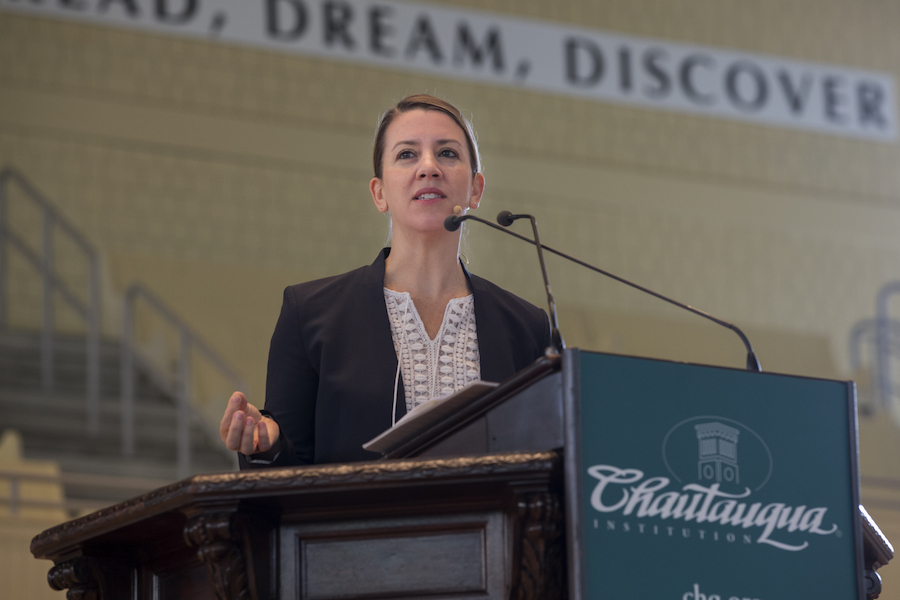 For an advocate of food as a tool for justice, it seems appropriate that Anna Blythe Lappé first heard about the murder of Heather Heyer while standing in the kitchen.

“Less than two weeks ago … I read the first news coming out of Charlottesville that I’d heard: that a woman had been killed at the protests of white nationalists and white supremacists,” recalled Lappé, the founding principal of the Small Planet Institute and a writer covering food and environmental issues.

The rally, and the death it caused, were stark reminders of how much hate still exists in America. And it made Lappé think about how the country — and the world — can better foster love going forward.

“How do my day-to-day choices, and how does my work, and how is all of that part of a broader effort to bring to life what I see as our shared values of fairness (and) community, of care for self and care for others and care for the planet?” Lappé asked herself.

It was these ideals — and in particular, how they relate to food — that her Wednesday morning lecture in the Amphitheater would address. Speaking at the midpoint of Week Nine, “At the Table: Our Changing Relationship with Food,” Lappé made a case for thinking of food as not just a discrete category, but as one inherently tied to economic and social justice.

That sense of activism has been part of Lappé’s life for a long time, tracing back to the similar aims her parents pursued. She truly caught the bug, however, around sixth grade.

That fight had happened too late, though — the woman had recently been diagnosed with cancer, and she suspected the farm’s use of chemicals was to blame.

“At that moment, it felt like … that distance between my mother and me and her, as researcher and subject, disappeared,” Lappé said. “We were just a mother and daughter talking.”

But though the Lappés may have been engaged, few others were. So the woman asked them: “Why don’t more people care?”

It was a question without a good answer, and it made very clear to Lappé how food production systems harm the very workers who enable them to exist.

And it is through the food those systems provide that Lappé now hopes to connect everyday people with the more than 3 million American farmers who currently lack basic economic and medical protection.

The negative impact of the food industry isn’t just restricted to farmers, either.

Food production lies at the intersection of many of the 21st century’s largest crises, and when she finally went to college, Lappé knew it was an issue she wanted to tackle.

She just didn’t know how.

From volunteering to protesting to studying, Lappé searched for a route through which to enact change. But none seemed adequate; she was overwhelmed and adrift.

It wasn’t until 1999, while in graduate school, that Lappé found a path forward. It came to her at the Seattle World Trade Organization protests.

“At one point in the march, I looked up and I saw what seemed like an ocean of environmentalists, dressed up as sea turtles,” Lappé said. “And then I glanced to my left and I realized I had been marching alongside this contingent of burly, truck-driving teamsters. And to my right I saw this group of radical women who called themselves The Lesbian Avengers.”

Amid these and many other groups, she felt a sense of unity.

“I thought, ‘Here we all are, marching together, expressing our shared interests,’ ” Lappé said.

The question of how to best make a difference disappeared once she returned to school. The intersectional activism she’d seen in the streets of Seattle could carry over into her work, Lappé realized; she was free to attack systemic issues as she saw fit.

Like the passing of a baton in an intergenerational relay race, she picked up the work her mother had begun and the two set off on a trip to find the root causes of global injustice.

“We sought out countrywide movements and innovative city governments and radical land-reform efforts and creative farming enterprises,” Lappé said. “We traveled to India, France, Poland, Kenya, Brazil and Madison, Wisconsin. … And really, this journey changed how I looked at the world. It changed how I understood empathy.”

The dominant narrative of human nature is one of selfishness and survival at all costs, but what Lappé saw across the planet suggested otherwise. From a Brazilian farming business that sold organic seeds for the benefit of not just its workers but its customers, to a South Korean co-op 540,000 members strong where customers fought for higher prices and farmers for lower ones, each for the other’s benefit, people were using food to foster not wealth, but empathy.

“It’s the kind of empathy that allows us to imagine the fate of people we’ll never meet, of forests we’ll never see, of songbirds we’ll never hear,” Lappé said.

In the farms of Brazil, the markets of South Korea, the streets of Seattle — the human capacity for compassion is universal.

And be it the hate of Charlottesville or the melting of the polar ice caps, some of the biggest issues of our age can be faced through that “collective empathy.”

But how to express such a nebulous sentiment?

Through food, of course. And through environmentally conscious food, at that.

“(The choice to eat healthily) is often portrayed as the most self-centered of all food choices,” Lappé explained. “A choice you make for your health. … But I’m suggesting that we see the choice for organic really differently. What if we were to see this choice as a choice for the farmworker who shouldn’t have to (breathe) toxic chemicals just to do her job?… What if we saw this choice as a way to express our collective empathy?”

The harm caused by the food industry is vast, from neurodevelopmental disorders and low IQs in farmers’ children, to the hospitalization of those farmers themselves, to the nearby communities whose water is polluted by staggering amounts of pesticide runoff.

“Choosing to avoid these chemicals by supporting farmers who are using sustainable practices, by reaching for organic food, doesn’t just express concerns for ourselves, but expresses our concern for all of the communities impacted,” Lappé said. “It expresses our collective empathy.”

Despite what some press coverage would suggest, organic food is not an implement of elitist narcissism, she added. For those who can access and afford it, it’s a mechanism for environmental justice.

And from the birds to the bees, the lakes to the rivers, the farmers to the consumers — supporting green consumer practices pushes people closer together, not farther apart.

Just buying organic is not enough, though.

“Expressing collective empathy through food means going way beyond choosing organic, or any other marketplace expression of our values,” Lappé said. “It also means taking a stand … alongside the 21.5 million food workers in this country, who are among the most underpaid, overworked and unprotected workers. It means taking a stand through policy that ensures that all of us have access to good, healthy food.”

It will not be an easy fight. But through policies like the Good Food Purchasing Program, which allows school districts to buy food based on sustainability rather than just price, it is a fight gradually being won.

If the numbers are telling a story, it looks like it still might be one with a happy ending.

“At the root of all of this, in my mind, is collective empathy translated into action,” Lappé said. “It’s what social movements have been about for a millenia. It’s called solidarity.”

And it matters. Recalling a visit she and her mother took to Punjab, Lappé noted how strongly the local farmers reacted when they discovered she’d been at the Seattle WTO protest.

“One of the farmers took my hand, and he said, ‘That protest was the first time that we understood that people in your country cared,’ ” Lappé said. “ ‘It meant so much to us.’ ”

Marching alongside lesbians and environmentalists and union members, she’d never imagined her actions would stretch across the planet and change the lives of rural Indian farmers she’d never met before.

But, through the activists’ collective empathy, they had. And perhaps such interconnectedness provided an answer of sorts to that unanswerable question Lappé had been asked so many years ago by the cancer-stricken Ohio farm organizer.

It was the same feeling she felt last week at a candlelit vigil for Heather Heyer — the same one she felt a few days later, watching 40,000 counter-protesters stand up to white supremacy in Boston: community.

People do care. They just need to show it.

“Collective empathy, and our shared values of fairness and community, are not fixed in stone,” Lappé said. “They’re more like muscles. They can atrophy if we don’t exercise them. In the same way, they grow stronger every time we use them.”