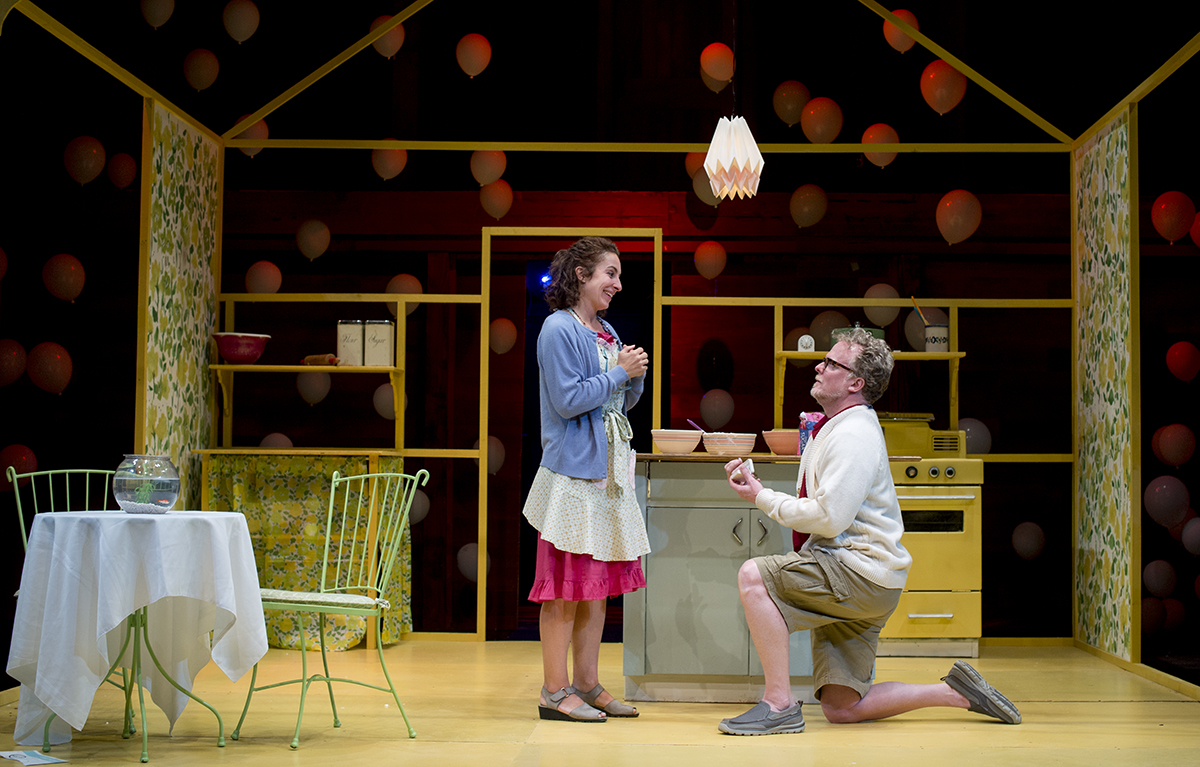 Annie Purcell and Daniel Pearce act out a scene in which Pearce’s character Kenneth proposes to Purcell as her character Ernestine after being in love for eight decades during a photo call following a performance of the New Play Workshop production “Birthday Candles” Tuesday, Aug. 2, 2017 in Bratton Theater. DAVE MUNCH/PHOTO EDITOR

In a six-hour span Friday, Bratton Theater’s stage will go from an industrial prison to a homey kitchen.

Chautauqua Theater Company will perform Building the Wall by Robert Schenkkan at 2:15 p.m. Friday and then Birthday Candles by Noah Haidle at 8 p.m. Friday as part of this week’s New Play Workshop. The plays have been running in rep since Tuesday, but this is the first and only day with back-to-back performances.

Although different in appearance and content, the audience will have the same point of view for each play, said Amelia Bransky, who, as CTC scenic design fellow, created the set. During both shows, the audience will be looking into an intimate, contained room, she said. Only, one will be bright yellow and one will be gray.

“Birthday Candles is incredibly whimsical — it’s kind of like a fairytale that’s rooted in reality, it has this really magical quality to it,” Bransky said. “And then Building the Wall is actually incredibly contemporary and very current, and in reaction to a lot of the political conversation that’s been happening.”

The CTC design fellows — who include Bransky, lighting fellow Alex Miller-Long, sound fellow Jordan Tani and costume fellow Mari Taylor — began working on the New Play Workshop designs at the end of June. Bransky described the process as “a combination of a lot of ideas coming together.”

“I remember one of my professors, he always says, ‘You know it’s a good process when you don’t remember whose idea it was that ends up onstage,’ ” Bransky said. “And I think that can definitely be said of both of these shows, to an extent.”

The current CTC design fellows are all graduates or soon-to-be graduates from M.F.A. programs around the country. The fellows assist visiting professionals during the season’s mainstage shows. The New Play Workshop is one of a couple times when the fellows get to take the lead on a project.

CTC’s New Play Workshop is unique in comparison to what other theaters are doing because the company presents new works as staged productions with sets, lighting, costumes and sound. Actors still hold scripts while onstage, but do not read stage directions.

While Bransky’s set situates an audience in one play or the other, Miller-Long’s lighting design provides visual cues. Building the Wall, set in a dystopian 2019, imagines a conversation between a history professor and an inmate who has worked as a security officer at containment camps for Muslims and Mexicans.

Given the setting of Building the Wall, Miller-Long found herself researching how natural light enters a prison. Usually, it’s through bars, mesh or some kind of filter that changes the texture of the light, she said.

“How do you make some place feel industrial, trapped, enclosed?” Miller-Long asked.

Meanwhile, Birthday Candles plays out over 100 years in the same kitchen. It might be a more familiar situation, but Miller-Long’s lighting still needed to convey a more mystical situation.

“It takes place over a large amount of time, but it’s also sort of timeless,” she said, adding the work needed “to sort of exist in a vacuum” without suggesting a time of day or year.

Throughout the process, Taylor, who worked on costumes, said she felt the creative team was on the same page.

“It was funny; our first design meeting, we all said the exact same thing,” Taylor said.

She recalled she had written down the same keywords to describe her vision for costumes as others had for their parts. Taylor envisioned the main character in Birthday Candles in bright colors, and ensemble in neutrals. For Building the Wall, she wanted the costumes to show the juxtaposition of the characters in the two-person play, as one is a white, conservative man and the other a black, liberal woman.

With only a few days to bring the productions together — rehearsals started last weekend — the New Play Workshop is an intense process. On sound design, Tani was tasked with creating original music for Birthday Candles, which he started a few weeks ago.

He compared the music in Birthday Candles to a film score. The music is woven throughout the play, but also represents the main character’s relationship with her son, who starts piano lessons as a young boy. As he grows up, the piano playing becomes more grandiose, but the heart of that music theme remains.

“You know that if done right, it could make everyone cry in the audience,” Tani said.