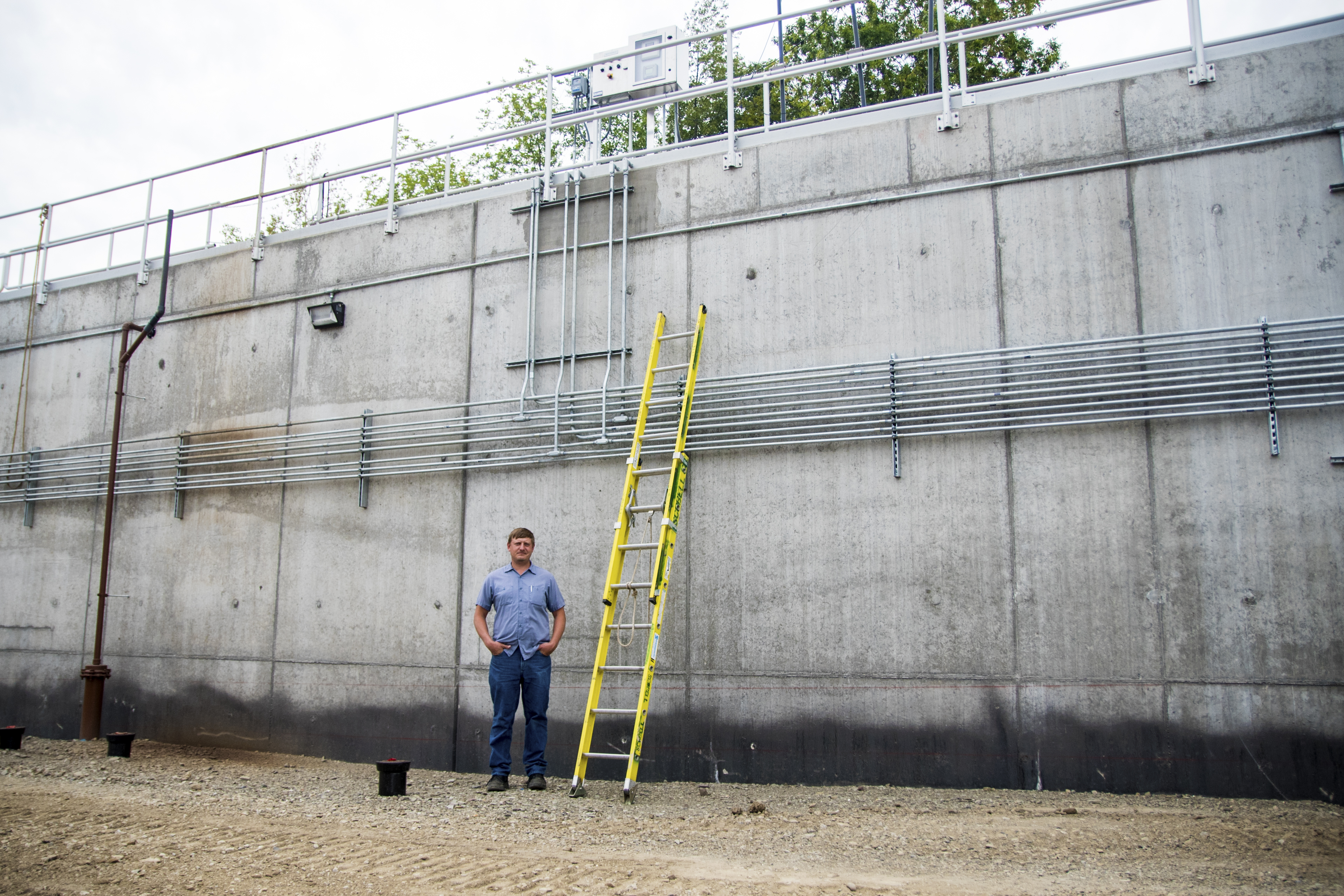 Mike Starks, a Chautauqua Utility District employee, stands next to the new tanks at CUD’s sewer treatment plant at the south end of the grounds. OLIVIA SUN / STAFF PHOTOGRAPHER

Construction work on Chautauqua Utility District’s sewage treatment plant at the south end of the grounds has proceeded this summer, largely out of sight but not completely imperceptible to all five human senses.

At times, the atmosphere around the plant has been a bit odoriferous.

CUD superintendent Tom Cherry, who plans to retire on his 40th wedding anniversary on May 15, 2018, said things did get downright smelly in the middle of July.

“We had expected timely delivery of specialized filters and ultraviolet light components of the tertiary and final phase of waste processing. They were to be shipped from overseas so as to arrive prior to the beginning of this season,” Cherry said. “Had the delivery been on time, we could have averted this problem. The equipment is actually still not here. It was promised for Aug. 1, but the date has now slipped to the beginning of October.”

Cherry said there is a valve that controls oxygen, keeping alive the waste-consuming organisms in the settling tanks.

“This valve operates similarly to the various electronic gizmos on your automobile that warn you when there is a problem — and sometimes when there isn’t,” Cherry said. “It’s like your check engine light. In this case, in July the air valve just shut off automatically, and the organisms couldn’t survive, and the waste just sat there until we could find a solution to the problem.”

Overall, Cherry is quite satisfied with contractor efforts during this season. They have been working on various electrical systems, mostly inside the buildings at the sewer plant complex at the foot of Bryant Avenue.

“We have insisted that the work not be disruptive in any way,” Cherry said. “There has also been a lot of progress on ventilation, HVAC and other mechanical apparatus and treatment equipment. It has gone along as we anticipated, except for that oxygen air valve.”

Cherry expects that the new sewer plant will be online and providing tertiary water treatment by the end of this calendar year. Tertiary treatment, he said, involves a more sophisticated filtering process and application of ultraviolet light, which takes the place of chlorine application.

Cherry has set his retirement date to give him and his team ample time to thoroughly test the new plant and all its equipment. He said the existing operating systems will remain fully online until there is every assurance that the new systems are ready. Thus, there will be no interruption or derogation of service.

“By next May, we should be completely ready to roll,” he said.

His wife, Kathy, remains “doubtful” he will actually retire in nine months, Cherry said, and Chautauquans accustomed to and comforted by Cherry’s long and extraordinary dedication to the Institution’s water treatment may also wonder if he can really walk away.

“I’m really going to do it, though,” he said. “We have brought on board the next generation of leadership at the CUD and it’s time for them to get on with the job. They are ready, and the new plant will be ready, too. If I leave one thing behind after all these years, it is that I worked hard to keep Chautauqua Lake as clean and healthy as possible.”

The sewer plant project, for which Institution property owners authorized up to $8 million in an August referendum three years ago, brings Chautauqua into timely compliance with clean water legislation passed during the Clinton administration.

Once the new plant is operational, effluent waste from Chautauqua Institution, the golf course and Chautauqua Shores will contain much less nitrogen, phosphorus and other pollutants than at present, and will be at lower levels than required under federal standards. It is estimated that the Institution’s effluent comprises up to 25 percent of effluent into Chautauqua Lake during the summer.

Cherry said Chautauquans should expect to see no project-related increase in their taxes until at least August 2018.

Original estimates put the average household tax increase at around $400 annually for the 30-year life of the bonds that secure the project funding. If serial bond rates stay at or near their historic lows of recent years, the tax hit should be reduced.

Furthermore, Cherry said, that although taxpayers authorized up to $8 million for the project, it is presently on track to cost much closer to $7 million.

“If we do come in under budget, we have set up plans with bond attorneys and capital markets advisers to use any extra funds to pay down debt already accrued,” he said.

Cherry believes there will be funding available to adequately screen the 25-foot high concrete walls of the new settlement tanks, which have turned into something of an eyesore this summer.

“We have a long-standing agreement with Betsy Burgeson and the Institution’s gardens department to screen the walls with plantings of trees and shrubs after the construction period is over, during the coming off-season,” Cherry said.

He is also strongly considering painting the walls in a more muted hue that will better blend in with the surroundings.