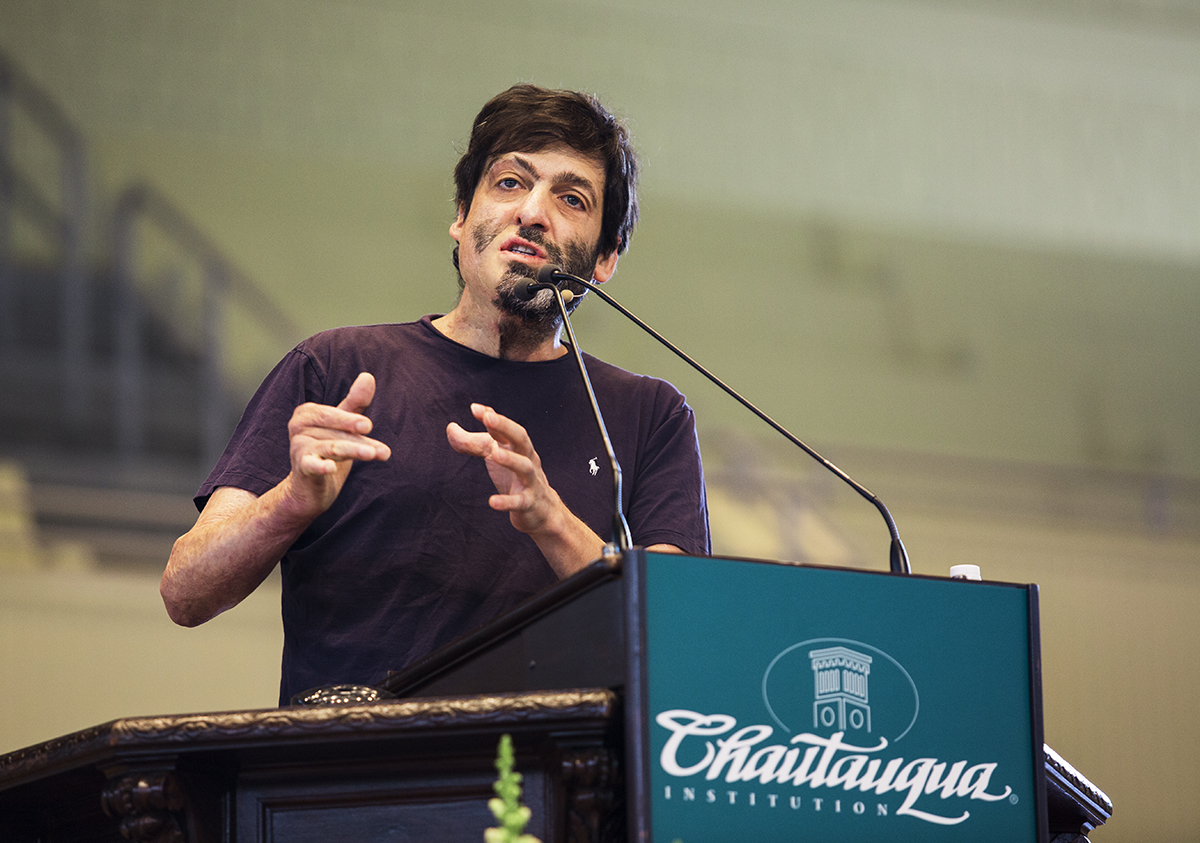 Dan Ariely kept a straight face through his lecture, but he still got emotional onstage — figuratively, at least.

The James B. Duke Professor of Psychology and Behavioral Economics at Duke University and a best-selling author, Ariely has plenty of credentials when it comes to talking emotional psychology. But before he got into the meat of his Monday morning lecture — the first of Week Seven: “The Nature of Fear” — he asked his Amphitheater audience for some self-analysis.

“I want us to introspect a little bit about our own experiences of emotions,” Ariely said. “So, we all experience emotions quite frequently; think about the last time you experienced some strong emotion, and think to yourself about what characterized (this) kind of emotional experiences.”

Upon doing so, he noted, “a couple of things should become apparent”:

With this baseline well established, Ariely outlined the structure of his argument to follow: three “case stud(ies) of emotion,” each filling in a different piece of the puzzle that is human emotionality.

In October of 1987, a child fell into a well. Dubbed “Baby Jessica,” her 58-hour rescue process became a media sensation. Her rescuers were revered as heroes, and donations poured in from across the country.

“You can think that this is great, and it is great,” Ariely said, “but the fact is that Baby Jessica was covered on CNN more than Rwanda and Darfur.”

Why does the former evoke emotions, and not the latter?

It is, Ariely said, a question of scale.

“Mother Teresa said, ‘If I look at the masses, I will never act; if I look at the one, I will,’ ” Ariely quoted. “And Joseph Stalin said, ‘One death is a tragedy; a hundred thousand is a statistic.’ ”

The sentiment is the same: Empathy does not increase for the victims of a tragedy when their number grows; in fact, it diminishes.

Ariely drew on experimental research to prove that correlation. For instance, one test compared the amount of money people were willing to donate to save a single starving Rwandan girl versus how much they’d be willing to donate when faced with famine in all of Rwanda, Malawi, Kenya and elsewhere in Africa.

“One girl … gets our imagination, our affection, our emotion,” Ariely said. “But the moment we get something to be described in a statistical way, as Joseph Stalin said, all of a sudden our emotions are turned off.”

In a similar experiment, two groups were primed with certain activities before being asked to give donations; some heard an emotional story, while others did logical math problems.

The subjects in an emotional state gave much more than those in a rational headspace.

“The conclusion is that emotions are evoked and get us to be generous to each other … but the moment we start thinking more carefully, our emotions are pushed aside, we think more carefully and we become more selfish,” Ariely said.

Like the allegory of a person walking to a job interview in an expensive suit who sees a drowning baby and must choose whether to rescue the baby and lose the job or get the job and potentially save more babies in the long run, the emotional and the rational are often at odds.

“The rational thing to do is to say, ‘You know, this is just one baby; why don’t I go to the job interview, I’ll get this job, and I’ll give 10 percent of my income to save drowning babies around the world,’ ” Ariely said.

And yet that mode of thought cannot be sympathized with, he noted; it seems cruel.

“The reality is that there are many babies, every day … who are dying from starvation and malaria and so on,” Ariely said. “And we don’t feel the same emotional need to do something. But when we see something, it’s close, nearby, and we think we can help immediately.”

The implication is that these “two modes (of thought) are incompatible,” and that the emotional, rather than the rational, is what’s “good for us and for the world.”

“Think about what it means to be in a society where you have trust for each other: There’s lots of things you can do,” Ariely said. “In a society where you don’t trust each other, we have to lock our doors, we have to sign documents with everything, lawyers have to be involved with all kinds of things. Trust is an incredible lubricant of society.”

Yet trust is not easy to maintain.

Ariely presented a thought experiment called the “public goods game.” In it, 10 people each have $10; they can choose to keep that money or to put it into a centralized pot, which will multiply it by a factor of five and then distribute it evenly among everyone.

People might start off always putting their money into the pot, which benefits everyone. But eventually someone might keep their $10, which, combined with their portion of the redistributed wealth, makes them richer than everyone else.

And that’s all it takes. The next day, no one puts money into the pot. They all wind up with less than they would have otherwise, but they don’t feel like anyone else is getting one up on them.

“The moment people start violating the trust, things can deteriorate very, very quickly,” Ariely said. “And the moment we have a society in which people don’t trust each other, (it’s) very hard to climb back.”

This is not to say that trust is impossible.

In theoretical games like this, or the famous “prisoner’s dilemma” thought experiment, iterating the decision-making opportunity over and over again (with one’s fellow players learning from past rounds and acting accordingly in the future) adds a new variable into play: reputation.

“When we have a long-term incentive,” Ariely said, “we basically overcome our short-term selfish behavior. … (so) reputation systems are incredibly important.”

Ariely presented something called the “trust game,” wherein one stranger has $100 and can choose to give it to a second stranger, causing it to turn into $400. The second person might give the first person $200 back, or they might keep it all.

But trust is not the only powerful emotion that can take hold over humans. Revenge also has a tight grip.

For instance, in a modified version of the game, players who get ripped off can remove the other person’s money afterward — not for personal benefit, and in fact at a significant cost, but purely for the sake of vengeance.

“The majority of people in this game, when this actually happens to them, exhibit revenge,” Ariely said. “And not only that; an area of the brain that seems like pleasure operates at the same time.”

Revenge can be irrational, but it also compels social benefits. For instance, the threat of retaliation against a thief can disincentivize thievery, even outside the context of a judicial system.

Both trust and revenge, though, are ultimately rooted in human emotions.

“Emotions get us to behave in a better way than we would otherwise, or in worse ways,” Ariely said.

The Pursuit of Happiness

Many years ago, Ariely was injured in an explosion; he still cannot grow a beard on one side of his face due to the burns he received.

Because of his writing on the subject, he sometimes talks with other people who’ve suffered significant injuries and discusses with them how to move forward.

“If you’ve just got injured, it’s very clear what you have lost,” Ariely said. “It is less clear how life will turn out and what you can do.”

One such person was Ben, a young, quadriplegic Ph.D. student who wanted to talk with Ariely about “happiness in life.” They eventually settled on two meaningful projects Ben could pursue — writing a book and working on computer algorithms — but four months later, Ben decided to take his own life.

“When he committed suicide, it was of course very, very sad, but I also started thinking about why he gave up,” Ariely said. “Why did he give up and why are other people not giving up?”

Having spent time with other people in similar situations, Ariely developed a theory.

“The people who I found to be successful,” he added, “are the people who reduced the challenge to things that they could measure daily, and feel progress.”

Talking with these people is not easy for Ariely; it is, in fact, “an experience of misery.”

Yet like so many human endeavors — running a marathon, writing a book, opening a business — he is compelled to do it nonetheless. Though it is not a discrete happy moment, like “sitting on a beach drinking (a) mojito,” it still creates a “tremendous sense of satisfaction.”

“Most of those things that give us the longer-term happiness, the longer-term meaning, are usually inconsistent with momentary happiness,” Ariely said. “Think about the marathon: It’s a wonderful thing when you finish it, even though the individual moments come up as not as good.”

This fulfillment seems paradoxical, but it informs what the “pursuit of happiness” means, even calling the very notion into question.

“We have to override the interest to pursue momentary happiness,” Ariely said, “if we want to get things that will make us happy at the end of the month, year, decade and so on.”