The story of Chautauqua Lake is one of its relationship with people. The lake has attracted people from Native American mound builders to European settlers and soldiers, to farmers and manufacturers, to the members of the Chautauqua Assembly in 1874, to its year-round residents and the vacationers and tourists who flock to the area today.

Human beings have alternately exploited and protected the lake throughout its history, and they will determine its future.

At 3:30 p.m. Friday in the Hall of Philosophy, Jon Schmitz, the archivist and historian of Chautauqua Institution, and Doug Conroe, the executive director of the Chautauqua Lake Association, will explore “Chautauqua Lake: Past, Present and Future,” as part of the Oliver Archives Heritage Lecture Series.

Chautauqua Lake is one of the “highest navigable waters in North America and is divided into two basins of nearly equal size by Bemus Point,” according to the New York State Department of Environmental Conservation. The lake is about 17 miles long and two miles wide at its broadest width, with a surface area of about 13,000 acres. It is approximately 75 feet deep at its deepest and has a shoreline of a little more than 42 miles.

Because of its height, the lake does not drain into Lake Erie, about 15 miles north. Instead, the water from the lake drains to the south, first emptying into the Chadakoin River in Jamestown, then traveling east to Conewango Creek, which in turn flows into Allegheny River in Warren, Pennsylvania, and continues on to the Ohio River in Pittsburgh.

Not much is known about the Native Americans who first settled near the lake, according to Schmitz. And the origin of the name Chautauqua is also somewhat murky, though Schmitz takes great pleasure in dispelling many of the myths that surround the name, including the ever-popular “bag-tied-in-the-middle” legend.

The first Europeans arrived in the area in the mid-18th century. France wanted to consolidate its hold on the St. Lawrence and strengthen its more tenuous hold on Mississippi by way of the Ohio River system as English traders were moving into the region, Schmitz said. The French used the lake as a connection to Lake Erie and as a base to travel to Fort Duquesne in Pittsburgh, which gave it strategic importance during the French and Indian War.

After the War of 1812, and following the Great Lakes Convention, the lake was no longer strategically significant, and it more or less returned to its primordial nature, Schmitz said.

It was opened up again with the advent of the railroads, and materials from wood to ice were shipped along the lake. Then came the establishment of the Chautauqua Assembly in 1874 by John Heyl Vincent, a Methodist bishop, and Lewis Miller, a wealthy manufacturer and inventor, who built a community along the lake that was dedicated to religious, educational, cultural, artistic and recreational pursuits.

Chautauqua Lake was known for its fishing, especially its plentiful supply of muskie, Schmitz said, but the number of fish began to decline because of overfishing. A hatchery was created to restock, he said, but it wasn’t enough. Pollution from farms and industry and a changing shoreline decimated the muskie population.

But the lake remained an idyllic place to swim and boat and, thanks to the stewardship of the people who continued to flock here in the summer, it remained healthy, if not pristine.

“It’s a productive lake in terms of algae and fish,” he said. “There are problems that need to be addressed, such as the reduction of nutrients in the lake and policy decisions about how submerged aquatic vegetation, weeds, should be managed or not managed, but the lake is following its natural progression.”

The lake is the source of all drinking water for the communities that surround it, and that water is clean and not threatened, Conroe said.

One big issue is the algal blooms in the lake, which are more significant in the south basin than in the north basin, he said, adding that algae has always been a feature of the lake. As the water temperature increases, the blooms increase. As they progress from mild to intense, they become a health hazard for domestic pets and can present a hazard to people in the form of a mild rash on the skin or intestinal disorders if ingested.

“A normal bloom doesn’t present a threat,” Conroe said. “It’s actually good for the aquatic life of the lake. It’s the intensive blooms that are not good.”

He said that the lake has never, to his knowledge, been completely closed to swimming, but that some sections have been closed periodically. This year, Conroe said, there is only one section of the lake that has been closed, in Lakewood.

“We are currently seeing good conditions at Chautauqua,” Conroe said. “And we hope they will continue through the end of August.”

The Chautauqua Lake Association, the state, local municipalities and conservationists monitor the condition of the lake and take care of it through weeding and other conservation and maintenance methods.

“If we don’t continue to take the action we have been taking to protect the lake, the prognosis is not encouraging,” Conroe said. “If we do, we can avoid the negative conditions that would result.” 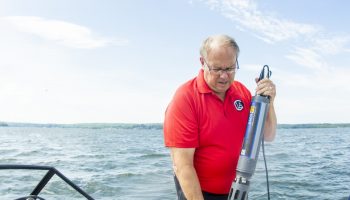