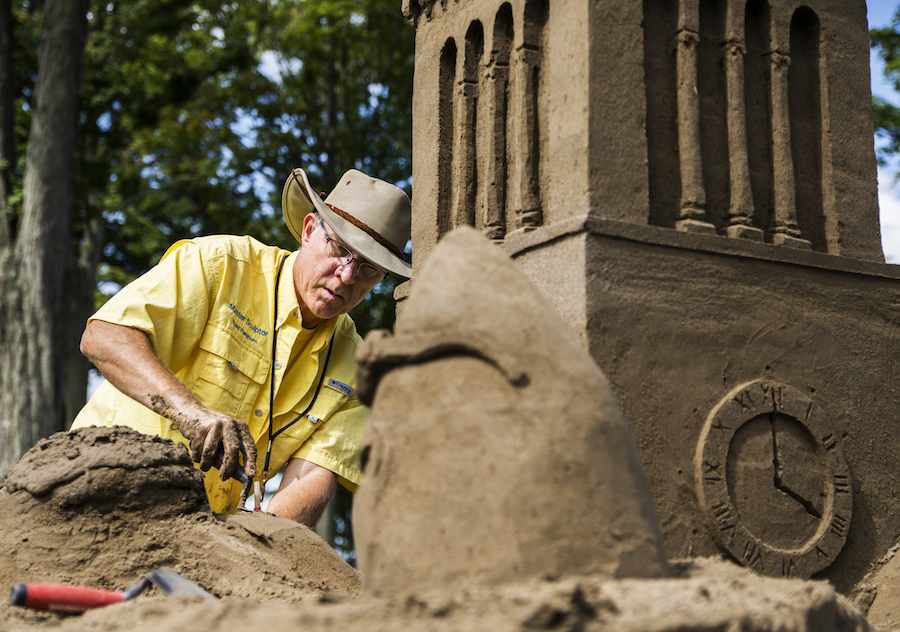 Playing in sand never gets old.

Todd Pangborn has been doing it since 1997, when, at 35 years old, he started building sand sculptures during beach vacations as a way to entertain both himself and his family.

“The first one I ever did was the back of a dolphin coming out of the water,” he said. “It was pretty rough.”

Pangborn’s completed sculpture will be on display at the Friday Night Lakeside Clam BBQ event starting at 6 p.m. Friday in Miller Park.

What started as a way to keep himself busy during family trips to Virginia Beach quickly became a serious hobby for Pangborn.

“I did the first one, looked at it and thought, ‘I can do better,’ ” said Pangborn, a native of Jamestown.

The next day, he built a three-foot-long turtle. He thought it was better. The day after that, he built something else that was a little bit bigger and even better. By the end of the week, he’d carved a 15-foot lobster out of a mound of wetted and packed sand referred to as “soft pack.”

Every summer, he’d spend almost every day of the week or two his family was at the beach, carving and sculpting.

Pangborn has no formal art training. A mechanical engineer by trade (he designs ultrasonic cleaning systems), he said he learned a bit by looking online when he first started sculpting, picking up some hints and tips.

Yet people would still approach him as he sculpted during vacations to ask if he was a competitive sculptor.

It wasn’t until 2011 that he finally entered his first amateur competition. By 2012, as a result of winning a small handful of amateur events, he was invited to participate in the advanced amateur division of the American Sand Sculpting Championships in Fort Myers Beach, Florida.

“That was the first time I got to watch masters work,” Pangborn said, “and that’s where I got ideas of how to use forms to build up the sand” to start to build taller, more intricate sculptures (To date, his tallest has been nine feet).

A year later, he won the advanced amateur division at the American Sand Sculpting Championships and was invited by his peers to begin competing in master-level competitions.

While he is still a fairly “new” master, and though his ability has continued to grow (he placed second in the Solo Master competition at 2015’s American Sand Sculpting Championships), Pangborn enjoys the fact that sculpting is a hobby for him.

“If I were to be doing this for a living, trying to make a living out of it and doing it every week, I would probably get tired of it,” he said.

At age 55 and still working full-time, sculpting gives him a way to blow off some steam and entertain people while he’s at it.

As an example, he shared a story about an interaction during a Texas sculpting competition he took part in.

When he was finished with his work, there was one particular woman who continued to circle his sculpture, mouth wide open, flabbergasted.

“I walked over and touched her on the shoulder and said ‘I want to thank you for enjoying it this much,’ ” Pangborn said.

There are some personal benefits as well.

“You never outgrow it, you know?” he said. “And it keeps you young.”