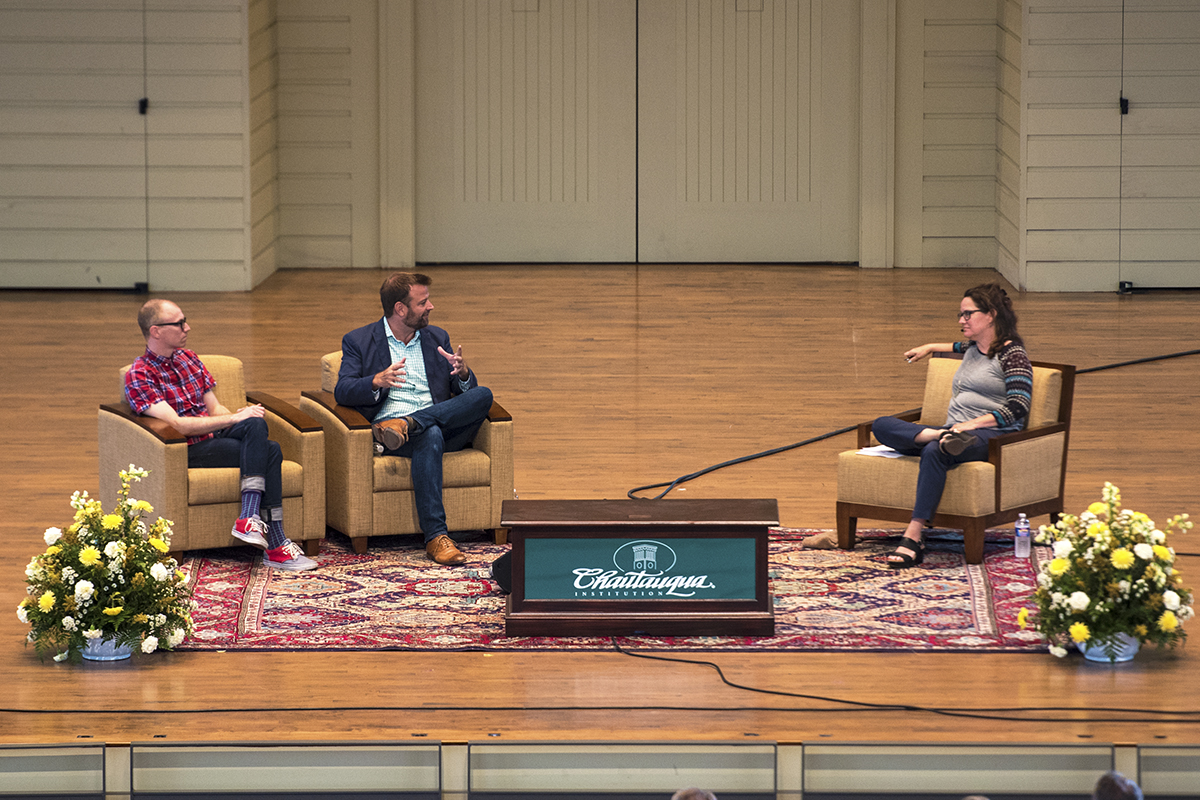 A priest, a rabbi and an imam walk into a bar.

A blonde, a brunette and a redhead board a plane.

The rule of threes is a tenet of good joke-writing, revered for creating the ideal circumstances out of which humor can arise.

But when Carlin, Nesteroff and Morrison spoke together Friday morning at the close of Week Six: “Comedy and the Human Condition,” their tripartite conversation was ripe not just for laughs, but for thinking about those laughs critically, too.

“We are three equal partners here on this stage, participating in our own ways, here to tell our version of the story of comedy and our kind of path through it,” said Carlin, a writer, public speaker and radio host. “So I’m here today as a storyteller and a keeper of the Carlin story.”

Diving right into the talk — titled “How the Story of Comedy Tells the Human Story of America” — the other two speakers went on to introduce themselves, too.

Thinking of comedy almost like a magic trick, Morrison came to view the art form as “worthy of celebration” and worked in his career to “get the word out on how important comedians’ voices are.”

The other comedy historian on stage, however, offered more of an insider perspective.

“My heroes were George Carlin and Bill Hicks and political-minded comedians, and so when I started stand-up when I was 18, I thought, oh, I’ll be like them, I’ll put (in) my political opinions, not realizing that not a lot of people wanted to hear the political opinions of an 18-year-old,” said Nesteroff, author of The Comedians: Drunks, Thieves, Scoundrels and the History of American Comedy and curator for the National Comedy Center.

Carlin came from a different place, having grown up with one of those heroes.

“What fans do, (what) all of us do as fans, is we put these people up on pedestals, you know; we see them as gods,” Carlin said. “Especially in American culture, you know? For the people who don’t have a traditional God, their celebrities become gods.”

Growing up in the shadow of George Carlin, she had a front row seat to the massive influence these celebrities, and comedians in particular, have on their admirers.

“Underneath that shiny object you see onstage,” Carlin continued, “is a man; is a human man, with a heart, who struggled, who was a husband, who was a father, and was not a perfect human being by any stretch of the imagination … (and I) wanted people to see that even our heroes are confused at times, are depressed, are lost (and) don’t have the answers, even though they look like they have all the answers onstage.”

Beyond their physical flesh, though, figures as big in the American imagination as George Carlin also hold symbolic power.

“He’s not just a comedian, but he’s sort of an iconic representation of America for a good 40 years,” Nesteroff said.

Pivoting to the question of political correctness in comedy, Nesteroff asked for his peers’ thoughts on the headline-making topic.

“The phrase, I think, gets used too much now without a hard, consistent definition of what we mean when we say ‘political correctness,’ ” Nesteroff said, pointing to the different definitions of the phrase used by each speaker this week.

“Prior to World War II, the swastika was a symbol of peace and, like, spirituality, and it got co-opted by the Nazis, and for that reason we can never use it again; it’s a symbol of hatred,” he added. “Political correctness — the phrase has been co-opted by this new emerging fascist movement in America, and that’s very disturbing. And I don’t want to ever have to say anything, or complain about something, that the racist movement’s also complaining about because that means we’re probably not complaining about the same thing.”

Morrison, meanwhile, was skeptical about political correctness prior to working on “The History of Comedy,” but after interviewing more than 60 comics for the project, he gained a better appreciation for the concept.

“Sarah (Silverman), what she said to me, is like, ‘I’m thinking I’m gonna listen to the people who are on college campuses because they’re typically always on the right side of history,’ ” Morrison said. “And my opinions started to change a little bit. I still feel very harshly … (that) if it’s funny, you get a pass.”

Intention also matters, he clarified. Punching up is not the same as punching down.

What fans do, (what) all of us do as fans, is we put these people up on pedestals, you know; we see them as gods,” Kelly Carlin said. “Especially in American culture, you know? For the people who don’t have a traditional God, their celebrities become gods.”

Nesteroff had a different interpretation of things.

“I mean, a comedian’s job is to make the most amount of people laugh,” he said.

Quoting materials from her father’s archival files, Carlin noted that he’d referred to political correctness on campuses as a “pernicious form of intolerance disguised as tolerance.”

Bringing up the objections that comedians and people on the right have to political correctness, she said: “We’re tired of people telling us what to do. There’s that part of it: There’s this rebellious nature in America which is, ‘freedom, liberty, we get to do what we get to do, and you don’t get to read into our intentions willy-nilly.’ ”

Nesteroff still took issue with that sentiment, though.

“As a historian, I have not observed a trend of censorship increasing in comedy,” Nesteroff said. “To the contrary, I feel like there’s more freedom to say whatever you want in comedy today than in any time previous(ly) in history.”

But what George Carlin took more issue with, Carlin said, was euphemistic “softening of language.”

“He talked about how World War I was shell-shock, and World War II was battle fatigue, and then we got post-traumatic stress disorder,” Carlin recalled. “And you added all these syllables, and you don’t know what anyone’s talking about anymore; because for him, it was always about language being honest.”

Nesteroff theorized that the issue is more about “the comedian’s ego than true persecution,” but Morrison brought up the comic’s social function as a provocateur.

Pointing to Chautauqua Institution’s “mandate of robust civilized dialogue,” he noted that lots of his favorite comedians initiate such dialogue.

“And sometimes it can be controversial, but in many ways, comedy is a great way to have conversations started,” Morrison said.

To illustrate this capacity, Nesteroff brought up Dick Gregory, who became “the first African-American comedian to break the color barrier in stand-up comedy” after he performed his civil rights-focused material before an audience from the Deep South — and “brought down the house.”

“But,” Nesteroff qualified, “he did not feel that his comedy would be an effective enough vehicle to enact any kind of social change.”

So Gregory got directly involved with the civil rights movement, going to Birmingham and Selma to leverage his celebrity status in support of black liberation.

As a historian, I have not observed a trend of censorship increasing in comedy,” Kliph Nesteroff said. “To the contrary, I feel like there’s more freedom to say whatever you want in comedy today than in any time previous(ly) in history.”

George Carlin, too, pushed the envelope comedically, though he got involved in politics more by accident than anything else. For instance, Carlin recalled how her father was arrested after the 1972 Milwaukee Summerfest for his “Seven Words You Can Never Say On Television” bit.

“They open the (dressing room) door, and the cops are there, and they take my dad away, and I didn’t know if I was ever gonna see him again,” Carlin said. “I was absolutely terrified.”

A few years later, a radio station played a recording of the same material live on air, without censoring the titular “Seven Words.” The FCC became involved, and the case “went all the way to the Supreme Court,” she said.

“Every single justice who was on the bench had to sit there and listen to my dad’s routine,” Carlin said. “It’s in the annals of the Supreme Court.”

Both Dick Gregory and George Carlin, in their own ways, reveal the power of comedy.

“These are people who had the right answers, but they used a different voice to get a reply,” Morrison said.

Bringing their three-way dialogue to a close, Carlin broached the question of why comedy isn’t afforded the same reverence typically given other art forms, and whether it even should be.

“You can exist (with) a very happy life, a very fruitful life, without knowing anything about the history of comedy,” Nesteroff said. “But: it’s important for me, and to me, because it gives me context for everything that I see now.”

Morrison questioned the propriety of non-comedians analyzing comedy in the first place.

Paraphrasing a famous E.B. White quote, he said, “Humor, like a frog, can be dissected — but you lose the patient in the process.”

Carlin, though, still saw value in such dialogue, even just from the perspective of a fan.

“When I got (my father’s) stuff from his storage units after he died … I find an envelope that says ‘Set List for First “Tonight Show” ’ — I’m a kid in a candy store,” Carlin said. “I’m like, oooh, ‘I can’t wait to show this to my comedian friends.’ ”

So does studying the history of comedy actually matter?

Well, it depends who you ask.