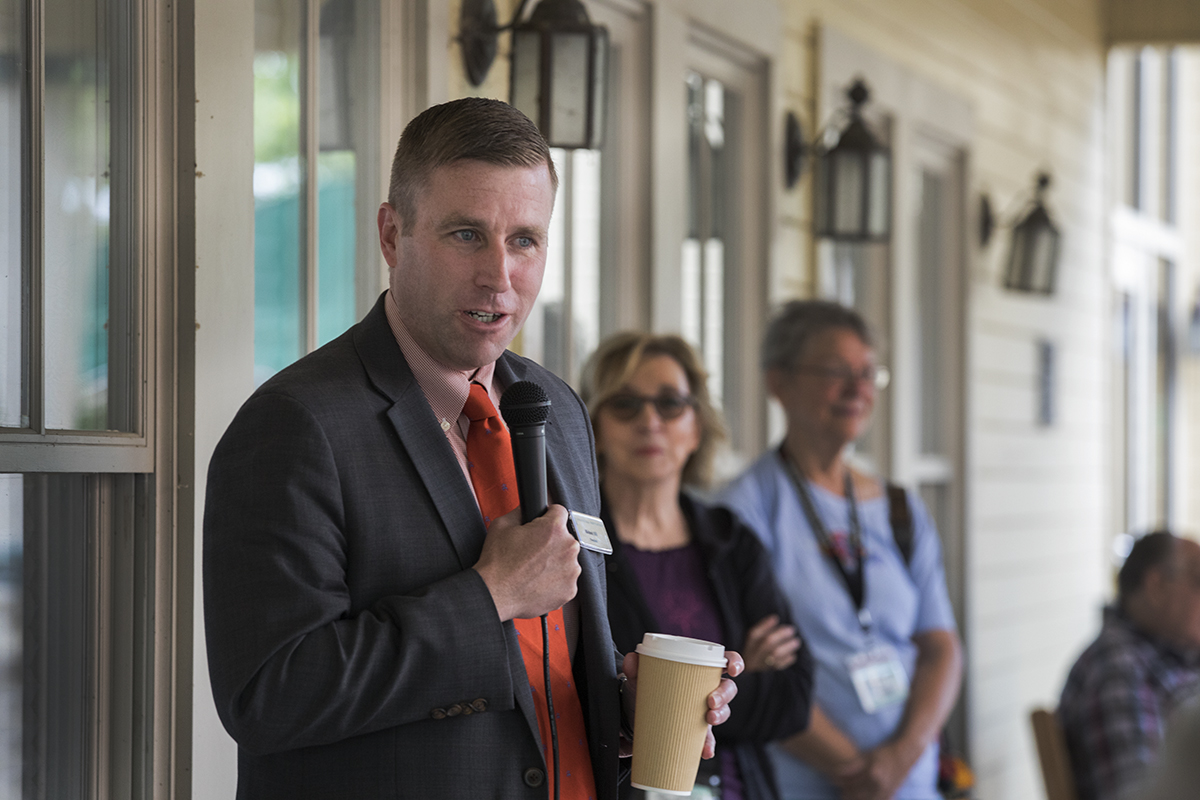 Despite being president of Chautauqua Institution, Michael E. Hill said he experienced the current season almost in the same way Chautauquans did.

“It’s been an incredible season for me, personally,” Hill told Chautauquans gathered on the porch of the Hultquist Center Wednesday morning. “You all are used to this. For the longterm Chautauquans, you get here Week One and think, ‘Oh, we have this wonderful summer.’ And then it’s Week Nine. So, I’m not sure how that time machine works, but I think there is a special vortex over Chautauqua.”

As this was his first season as president, Hill said he inherited much of this summer’s programming. He shared his thoughts on the 2017 season and hopes for 2018 in the final Institution Leadership Porch Discussion of the summer, before taking questions from Chautauquans.

For both Hill and community members, there was a focus on the future — not just 2018, but beyond — and how the Institution can better reach youth, the greater Chautauqua County population and virtual Chautauquans.

One way Hill said the Institution hopes to expand its reach is by carrying on the festival atmosphere of Week Nine, themed “At the Table: Our Changing Relationship with Food.”

“This week that we’re going through now is really part of a grand experiment that I’m excited about,” Hill said, adding that he was pleased to see Bestor Plaza filled with both residents and regional patrons.

For 2018, there will be two weeks that play with this “festival concept,” Hill said.

Next year’s Week One will build on the model of a literary festival. Hill said this theme will spread across the grounds, perhaps through writing workshops and a book fair. Similarly, next year’s Week Nine will feature a film festival, but also bring food back to Bestor Plaza, Hill said.

With this festival atmosphere comes mixed reactions to what some Chautauquans believe is an overly relaxed policy on alcohol.

One woman, who declined to identify herself, spoke up on what she called a “bad move” to allow alcohol on Bestor Plaza as part of the food festival, and said she noticed increased alcohol consumption on the grounds this the summer.

“I have brought my children here, I am bringing my grandchildren here, because I want the experience for them to have the freedom to move around without having to encounter that, at least in this community,” she said. “And I think that’s changed the very foundation of Chautauqua, and I for one object to it strongly.”

In response, Hill said he shared her concerns that alcohol should be contained to the appropriate areas — which include private homes and certain restaurants — and said employees have been monitoring areas like the Amphitheater and, in the case of Week Nine, Bestor Plaza to the best of their abilities. By and large, he said, there have been no problems doing so.

Week One: “For Love of the Written Word”

Week Three: “The Art of Play”

Week Four: “Russia and the West”

Week Five: “The Ethics of Dissent”

Week Eight: “The Forgotten: History and Memory in the 21st Century”

Week Nine: “The Impact of Cinema: Storytelling and Social Change”

The concern caused Brad Johnson, who described himself as a Chautauquan and Oklahoma-based chef, to speak up. Johnson praised the Institution for bringing a spotlight to the culinary arts, including the craft beer and wine industry, in Week Nine.

A challenge of Chautauqua, Hill said in response to both views, is providing for “competing demands.” Part of his job is ensuring Chautauqua offers a “first-class experience” for everyone, while still being sustainable.

Part of that sustainability is providing for the younger generation at Chautauqua. Several Chautauquans questioned how to better provide for youth outside of the Boys’ and Girls’ Club, as well as spark an interest in traditional programming.

“Especially as my kids age, I would love to see them participate more, and I’m wondering if you have any plans you can share with us,” asked Claudia Cummins, who has been coming to Chautauqua for several years from Ohio with her boys, now ages 10 and 13.

Hill said the Institution is looking at ways to better involve and engage teens ages 13 to 18; he added that similar discussions came up during Week One’s “Invention” theme and Week Two, presented in partnership with National Geographic. Visiting scientists questioned why they didn’t have more time with youth, Hill said.

“They were saying, ‘We would have had equal or more fun going from a 10:45 a.m. (lecture) to a neutral spot and getting kids excited about science,’ ” Hill said, adding that parents should look for future workshops and makerspaces as was on the grounds in Week One.

When asked about initiatives relating to young people and classical music, Hill said there’s also ongoing discussion on getting young people comfortable with the classical arts.

It’s a conversation “every other classical arts organization is having in America,” Hill said.

For those who aren’t yet used to entering a concert hall, this past season Chautauqua experimented with pop-up performances from Ailey II and the Chautauqua Opera Company, and having Music School Festival Orchestra students play for folks waiting in line before Amp shows, Hill said.

Related to that discussion is expanding Chautauqua’s reach online.

“You’ve got a generation that is used to interacting with the entire world through devices,” Hill said. “Now we would love for them to detach a little bit, but I think we’re going to have to meet them halfway.”

But that connectivity can also help lifelong Chautauquans, who perhaps can’t get to the grounds for health or scheduling reasons. Hill said the Institution is still “crunching” the lessons learned from streaming “A Day Live from Chautauqua” during Week Eight. But that initiative, in which people could experience events in real time online, appears to have been “extremely successful.”

Those online grounds, found at online.chq.org, will continue to grow under the leadership of Emily Morris, the Institution’s vice president of marketing and communications and chief brand officer, Hill said. During the off-season, Chautauquans are also encouraged to check the Institution’s social media feeds. If they do, they will see how the Institution continues to serve the county community, such as through the Battle of the Books for area fifth-graders, Hill said.

Whether on the grounds or off, Chautauquans have been encouraged to engage in a “muscular civil dialogue” this summer — and that phrasing was cause for concern, as several expressed at the porch chat.

“I have to say that every time I heard the phrase ‘muscular civil dialogue,’ I felt like I was being chastened,” one woman said.

Hill said the phrase is meant to promote “a mantra of listening first and trying to understand what someone’s saying,” and that he has heard “conservative folks feel silenced.” Ultimately, though, Hill said he is “sold on the concept” — not necessarily the wording.

“We’ll continue to wrestle with this together,” Hill said.

Hill said he was thrilled to see Week Six, “Comedy and the Human Condition,” become the week with the third-highest attendance since the Institution started tracking such statistics, especially since it was a departure in some ways from traditional programming.

“We don’t always have to give you all serious stuff to be successful, and we can partner in our region and have that be really successful,” Hill said.

Hill also noted the weeks on faith and the media, both potentially difficult topics, went well.

Yo-Yo Ma’s visit, which will take place during 2018’s Week Seven, themed “The Arts and Global Understanding: A Week Featuring The Silk Road Ensemble with Yo-Yo Ma,” is one Hill said he is looking forward to.

He also teased Week Eight, and what will perhaps be a challenging week, on “The Forgotten: History and Memory in the 21st Century.” Hill said he hopes to have a “surprise curator that will delight you.”

While the Amphitheater renovation was a major project, Hill also praised other, smaller beautification projects. Before the season started, entryways at Turner Community Center, the Main Gate, as well as popular places like the Colonnade and Athenaeum Hotel lobby, were spruced up. This care will continue, Hill said.

Similarly, Hill said the upcoming Odland Plaza construction will respond to concerns expressed in response to the Amp update, like bike access and additional meeting space.

Morning Worship: Leave Chautauqua blessed to be a blessing