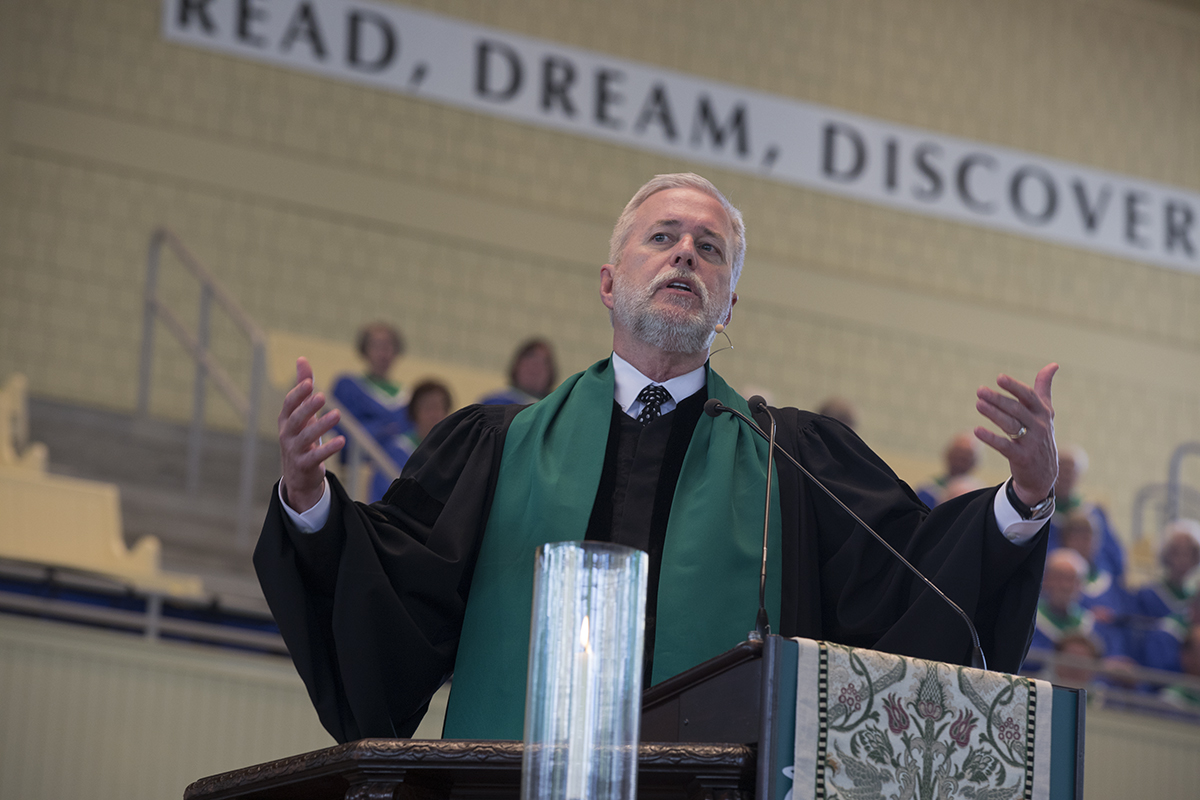 This is not the first time you have heard the story of the Prodigal Son, said the Rev. M. Craig Barnes at the 10:45 a.m. Sunday morning worship service in the Amphitheater.

“But for over 30 years, I have had congregations who are mostly made up of elder brothers,” Barnes said. “What is the gospel to them?”

Barnes’ sermon series for the week is “Saving the Elder Brother,” and the title of Sunday’s sermon was “The Gospel for Good People.” The Scripture reading was Luke 15:25-27.

In Luke 15, Jesus tells a series of parables to the religious leaders of his day. They were concerned, Barnes said, because Jesus welcomed sinners and ate with them and he was “making a judgment on those trying to keep their sins to a minimum.”

The first parable was the story of the lost sheep. The good shepherd left the 99 sheep to look for the one that is lost. The second was about a woman who had lost a silver coin and upended her house to find it.

Both of these stories end with “Rejoice with me, for the lost is found.”

As Barnes recounted the story of the Prodigal, he said that asking for his inheritance before his Father had died was not usual, and the Prodigal was telling his Father he wished his Father was dead.

The Prodigal wasted all his money on “dissolute, riotous living,” and then could only find a job slopping pigs, “a tragic job for a Jewish boy,” Barnes said.

At one point the Prodigal “came to himself.”

“I don’t know if he had a moment of repentance,” Barnes said. “It doesn’t say he ‘came to Jesus,’ ” but the Prodigal decided to return to his Father’s house because he realized his Father treated his hired hands better than he was being treated.

The Prodigal rehearsed his speech to his Father.

“When I was in trouble, I always I had my lines down pat for my dad,” Barnes said. But before the Prodigal could get the speech out, the Father came running to greet him.

The Father ordered him a new coat and told the servants to kill “the fatted calf, the 4-H calf, the pride and joy of the farm.”

“Jesus’ point is that the Savior came to find the lost; devotion to the lost is why the Savior came,” Barnes said. “But what about the Elder Brother, the 99 sheep who did not get lost? The good shepherd left the 99 sheep vulnerable while he went to look for the one. When he returned rejoicing that the lost had been found, the other 99 rolled their eyes like the Elder Brother rolled his.”

The Prodigal’s story and Elder Brother’s story are not the same, Barnes said. He grew up in a church that had Sunday night services, the hallmark of which were testimonies by members of the congregation.

“Even as a boy I knew the basic outline — ‘I was a bad person, then I met Jesus, with Jesus I am a better person,’ ” Barnes said. He did not doubt the sincerity of the people who gave these testimonies because the church was filled with people who had conversion experiences and related to the Prodigal’s testimony.

“No one wants the testimony of the Elder Brother,” Barnes said. “It would be, ‘Uh, I was raised in the faith, never not believed, tried to do my best to do right.’ There is no drama; Hollywood does not want it and neither did testimony night.”

What is the amazing grace for those who did not wander away, who weren’t lost, who always believed? What sins can the Elder Brother confess?

Barnes said that when an “Elder Brother” in his congregation would tell him he needed to confess, Barnes knew that the sins would be boring.

Typically, the person would be chair of the governing board, chair of the stewardship campaign and an adult chaperone for the youth trip to Haiti. But, his mother-in-law was moving in with them, he needed to work some extra time to afford the construction to accommodate her, so could he take a break from teaching Sunday school?

“That’s it?” Barnes said. “I can do better than that. But as pastor to the Elder Brother, who is a really good person, what are the options to invite him deeper into the gospel?”

One option is to think that the Elder Brother is a Prodigal but just doesn’t know it.

“No one here today thought that the prayer of confession did not apply to them,” Barnes said. “There are things that you have done and left undone, and no one is counting on their own righteousness.”

“I have five mornings to answer that question,” Barnes said.

He cited theologian Karl Rahner, that there are different forms of spirituality that have a biblical basis. Two of them are “wintery” and “summery.”

“Summery” Christians likes their faith hot. They really believe, have a great testimony, want joyful worship like the party for the Prodigal. Their favorite psalm is Psalm 100. They like strong sturdy hymns like “Holy, Holy, Holy,” and praise choruses where they have an image of the presence of God.

“Wintery” Christians move to the margins and do a lot of lonelier soul searching. They talk to God like the Elder Brother talked to the Father, asking what is just and what is unjust. Their favorite psalm is Psalm 22. They like redemptive hymns in minor keys.

“The reaction of the wintery Christian to the tragedy in Charlottesville is deep grief: How can there still be white supremacists?” Barnes said. “The summery Christian moves quickly to look for the redemptive work of God in the world. They are both biblical, Psalm 22 versus Psalm 100.”

He continued, saying that wintery Christians always ask “Why do bad things happen to good people”; “Why has my life not ended up so good?” Summery Christians ask “Who is God, who am I, who should I evangelize, where does God want me to go?”

The Elder Brother has a spirituality of pressing the hard questions that he won’t leave alone.

“They are rigorous theological questions asking where is the mind of God when it seems God has left,” Barnes said.

The besetting sin of the Prodigal is obvious.

“The temptation of the Elder Brother is to be dead right — to make the right choices, but his soul has withered and is without joy. The point is to make it into the Father’s arms and know joy,” Barnes said. “That is the Prodigal.”

What will it take for the Elder Brother to find joy in the Father’s arms?

The Rev. Robert M. Franklin Jr., director of the Department of Religion, presided. Dede Trefts, vice chairman of the board of trustees and chair of the Bestor Society, read the Scripture. Jared Jacobsen, organist and coordinator of worship and sacred music, and the Chautauqua Choir were joined by the Youth Chamber Music Connection of Pittsburgh. These 53 young people are under the direction of Edward Leonard, founder and music director of the Chamber Orchestra of Pittsburgh and music director of the Pittsburgh Philharmonic. The group first came to Chautauqua in 2012 and has returned every year, doubling in size every year. On Friday morning at the 9:15 a.m. morning worship service, they will present the world premiere of a new piece by 19-year-old Sasha Voinov. This will be the fifth year that the group will premiere a new piece by Voinov. David Haas provided the setting for Responsorial Psalm 27, “The Lord is My Light and My Salvation.” The Chautauqua Choir and the Youth Chamber Music Connection presented “The Spheres,” by Ola Gjeilo from “Sunrise Mass,” as the anthem. The offertory anthem was “Agnus Dei,” from Gabriel Urbain Fauré’s “Requiem, Opus 48.” The organ postlude was “Tu Es Petra” by Henry Mulet. The Gladys R. Brasted and Adair Brasted Gould Memorial Chaplaincy provides support for this week’s services. 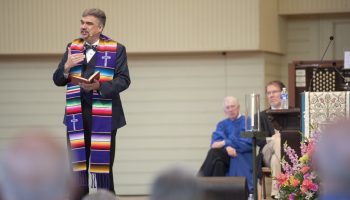 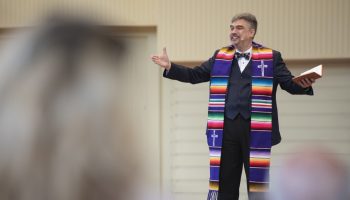 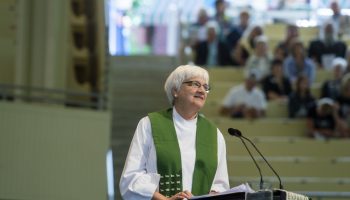