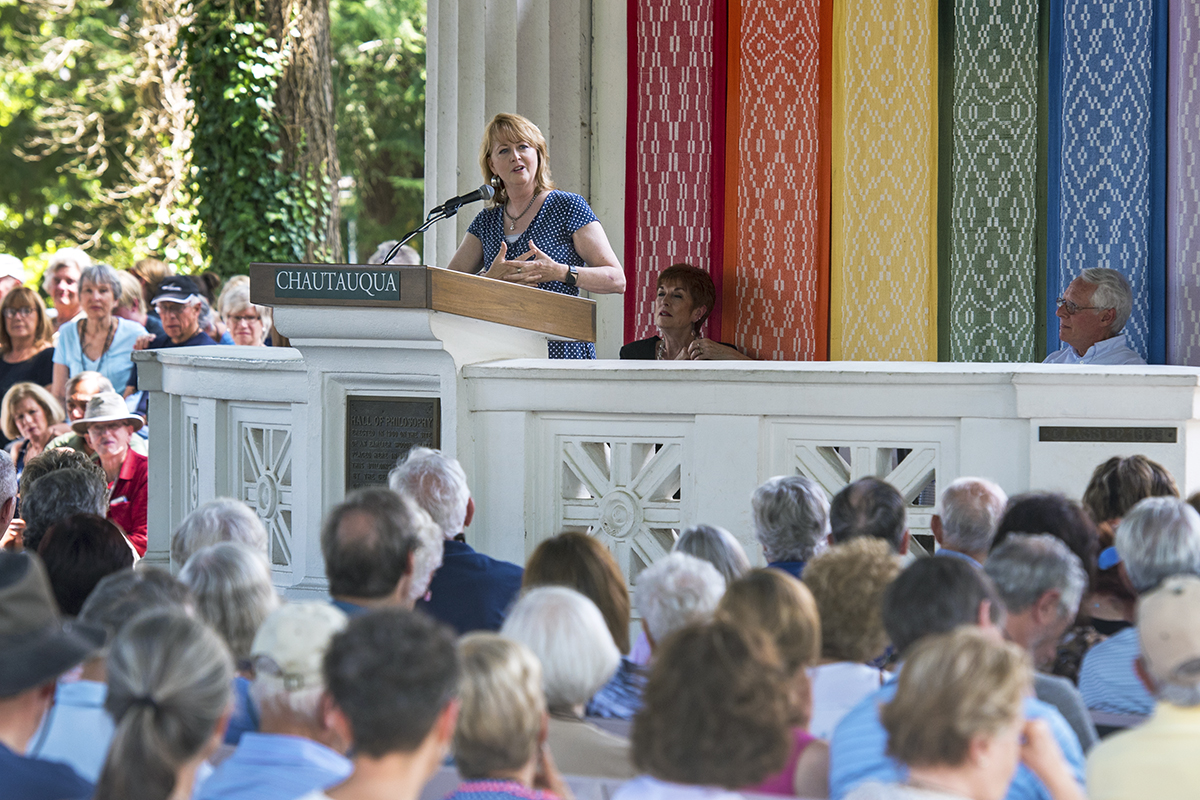 The Rev. Susan Sparks speaks on Tuesday, Aug. 1, at the Hall of Philosophy. Sparks is a current preacher and comedian. OLIVIA SUN/STAFF PHOTOGRAPHER

Sparks and Rabbi Bob Alper, two-thirds of the comedic trio on the Laugh in Peace Tour, recounted several stories in their lecture on “The Spirituality of Laughter” as part of Week Six’s Interfaith Lecture Series, “The Spiritual Power of Humor” Tuesday in the Hall of Philosophy.

Life’s problems, Sparks said, either happen because “something moves and it shouldn’t, or something doesn’t move and it should.” And humor has properties in common with her father’s solutions.

“Humor, like WD-40, breaks us open (and) helps us see things in a fresh, new way,” she said, “and like duct tape, bonds us together as community and helps us see the commonalities and not the differences.”

This is why Sparks is passionate about snickering in the sanctuary. If the church is laughing, its congregants are more likely to drop the “judgment and shame” and move into “joy and hope.” The Gospel signifies good news, but it seems to Sparks that many young people have received the opposite message. When “be(ing) serious in church” is not the only way to “be serious about church,” she sees a shift in the way people approach a service.

“You can see their shoulders drop, and all of a sudden there’s rapport and trust, and then they can hear the message fresh,” Sparks said.

She asked who among the audience carried a “3,700-page to-do list,” noting that people so often “beat themselves up,” but often just need to recognize they are doing the best they can.

“Life is a tragedy when seen in close-up, but a comedy in long-shot,” Sparks said, quoting Charlie Chaplin.

When they were in Charlotte, North Carolina, Sparks and her mother went to the Billy Graham Library, where a memorial garden for Graham’s wife, Ruth, complete with a “crazy tombstone,” resides in the back. According to the person at the desk that day, the Grahams were out doing evangelistic sermons; during their travels, they ran into some construction and, as a joke, Ruth declared she wanted one of the road signs on her gravestone. Her resulting tombstone includes her birth date, death date and “Construction finished. Thank you for your patience.”

“Here’s the bottom line — you can get all the money you want in this world, the largest house in the world, the best designer purse, the fanciest car — none of it matters,” Sparks said, “because the size of your funeral will always depend on the weather. So let it go!”

Sparks recounted a motorcycle trip to Montana, which included a stop at a motel. When she and her husband arrived, biker leathers and fake tattoos prominent, the desk clerk refused them service. Leaning across the counter, she told Sparks the motel didn’t “rent to their type.”

“My husband’s a retired federal prosecutor and I’m a Baptist minister on vacation, it’s all good!” Sparks countered.

But the receptionist wouldn’t budge, remarking, “The Bible says it’s wrong to lie.” Going across the street to a “biker-friendly motel,” Sparks changed into a clean T-shirt and grabbed her business card that clearly displayed her pastor title. Re-entering the motel, Sparks approached the desk again and, sliding the card across the surface, said, “The Bible also says ‘judge not’ ” — and the desk clerk laughed.

“When you laugh with someone, whether it’s a friend or family or stranger or even an enemy, your worlds overlap for a split second, and you’ve got something in common,” Sparks said.

The Laugh in Peace Tour produces similar friendships, letting the power of humor “sing out and shine.”

“I’m the Christian chick emcee that warms up the crowd, and I get up, and here’s a crowd of folks that’s everything from yarmulkes and burkas to Easter hats, and everybody’s kind of looking at each other like, ‘hmm,’ ” she said.

But once laughter is established, anything is possible.

Humor, like WD-40, breaks us open (and) helps us see things in a fresh, new way,” Susan Sparks said, “and like duct tape, bonds us together as community and helps us see the commonalities and not the differences.”

A breast cancer survivor, Sparks recognizes the physical healing power of humor as well. She recalled one hospital visit when the doctor prescribed a liver scan. In a bitter mood, Sparks told the doctor that was fine, but that she had some beer the night before. Frustrated, he walked away to collect the results of the CT scan, and when he came back, he told Sparks she had “Bud Light syndrome.” This startled her for a moment until she realized he was joking.

“When you can laugh in a place of pain, that’s so empowering,” Sparks said. “You can look at it and say, ‘You know what, you may defeat me, but you’re not going to define me.’ ”

She found proof of this when she officiated her first funeral, one on Staten Island for a member of her congregation who never left the house without flawless hair and makeup. When Sparks approached the open casket, she touched the woman’s body and immediately gasped, exclaiming that the woman’s hand was square. The woman was being buried with a box of hair dye.

“Mama was scared that they wouldn’t have her color on the other side,” her granddaughter explained, “so we’re burying her with ‘Miss Clairol 301C5.’ ”

“It doesn’t matter where we are,” she said. “We could be at Chautauqua having the best time, we could be in a chemo chair, we could be at the DMV, the grocery store, the line of traffic — it’s still life. We still have the opportunity to laugh, to feel joy, to heal.”

This is the same for Bob Alper, whose rabbinate is all about creating laughter.

“Humor, it turns out, is more than a pleasant aversion, more than entertainment,” he said. “Laughter is life-giving and life-affirming, and increasing its incorporation into our lives is a splendid way to enhance our physical and our spiritual health.”

Before this explanation, Alper delivered a few jokes — take the Frenchman, the German and the Jew in the desert. All three men, tired and thirsty, describe how they feel. The Frenchman says he must have wine; the German, beer; and the Jew, diabetes.

Chuckling at jokes like these, he said, is an asset for enjoying day-to-day life.

“All the great apes laugh — humans, chimps, bonobos, gorillas and orangutans,” he said. “We all have that same magic tickle spot under our arms.”

That being said, there are two topics Alper claims are universally funny — sex and flatulence. The ancient Greek playwrights, Buddhist monks and Benjamin Franklin, he said, all delivered punchlines about passing gas.

So then, he said, people need to read the Bible, keeping in mind the “scientifically unsophisticated people” in its stories. Accounts from the books of Esther and Genesis, Alper claimed, have plotlines that could double as an episode of a hit sitcom.

Does that mean religious people are funny?

“Except for Rev. Susan Sparks, Protestants are not funny,” Alper joked.

He addressed Presbyterians, Catholics and Muslims before landing on Jews — who, unashamedly, he claims have the best sense of humor.

In 2015, Alper’s video submission in the “Joke with the Pope” contest landed him a position as the honorary comedic adviser to the pope. His joke went as follows:

“My wife and I have been married for 48 years and our lives are totally in sync,” he said. “For example, at the same time I got a hearing aid, she stopped mumbling.”

Jews, Alper said, are often stereotyped as funny, but that leaves some people wondering: even during the Holocaust? Yes, he answered. Chaya Ostrower’s book, It Kept Us Alive: Humor in the Holocaust, details cabarets in ghettos and concentration camps where Jewish people circulated humor to keep themselves encouraged.

He knows of three particular topics he can unpack anywhere — weddings, teenagers and death. In one of his stand-up routines, for example, Alper claims Abraham sacrificed Isaac at 12, not 13, years old “because 13 wouldn’t have been a sacrifice.”

“When our kids were teenagers, the most helpful guidance we got was not from a psychologist and not from an educator — it was from a comedian,” Alper said.

Jokes don’t always have to come from a jester, though.

“We need to put laughter in our lives, and doing so doesn’t require being a comedian or even a joke-teller,” he said. “Telling jokes is primarily acting. Having a good sense of humor means you can smile and laugh easily, that you’re a person who values lightness and fun.”

And after doing this career for 28 years, Alper feels he’s got it down. 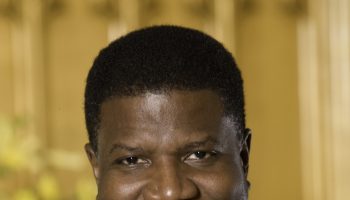