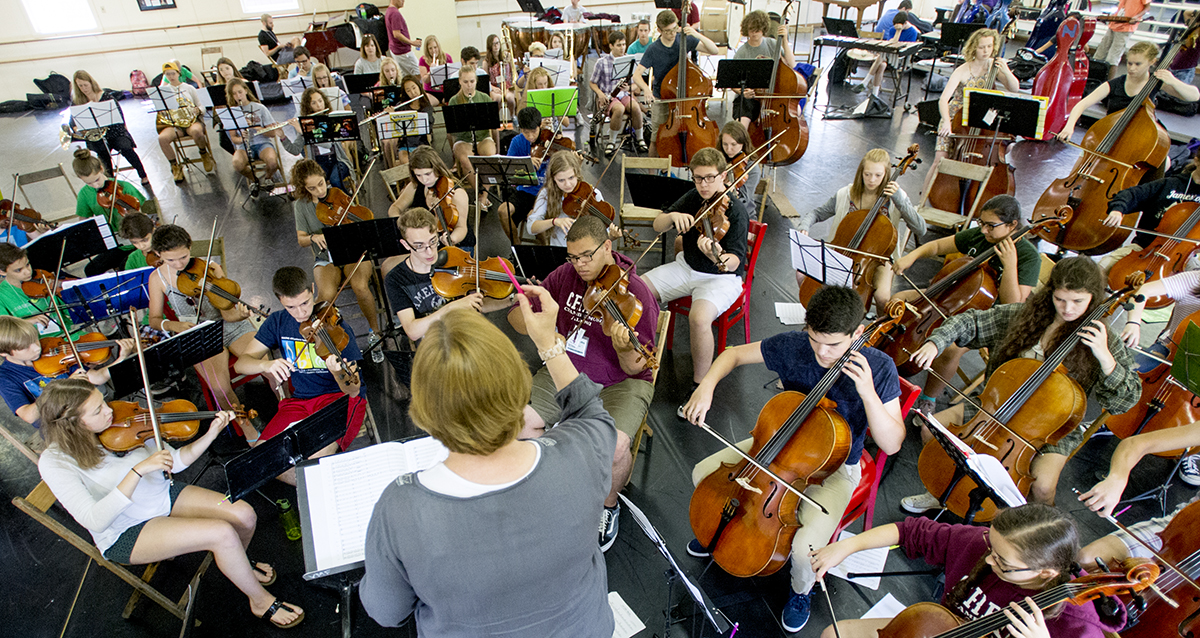 “It’s a summer opportunity for the kids (that) offers a diversity of musical experiences that they don’t usually get during the school year,” said Peter Lindblom, director of the Music Camps and assistant principal trumpet player in the Chautauqua Symphony Orchestra.

The camps cost $225 for students to attend, and this fee covers a gate pass, T-shirt and cost of tuition. In addition to having a nearly all-access gate pass and recreational time to explore Chautauqua, the students also attend a CSO open rehearsal.

“We have graduate students and professional instructors playing alongside fourth-graders in symphony rehearsal without anyone batting an eye,” said Terry Bacon, middle school band camp director. “The age doesn’t matter here. We speak in the common language of music.”

For the last 19 years, these camps have been sponsored by the Dibert Foundation in Jamestown.

“I like the way that it connects the Institution to the local region in a broader way,” said Jane Becker, board member for the Winifred Crawford Dibert Foundation.

Of the 120 students who are attending this year’s camp, 60 percent are Chautauqua County residents. The remaining 40 percent hail from different parts of the country and world. Some are the children of CSO members.

“Part of it is that we’re bringing a whole other generation, a younger generation, who may not connect (in any other way) with Chautauqua,” Becker said. “The kids come, they have a great deal of fun, they get exposed to really talented educators, music educators … and hopefully they leave with a higher skillset than what they came with.”

The Winifred Crawford Dibert Foundation is named for Winnie Dibert, a local of the Jamestown area who lived to 104 and was an avid supporter of Chautauqua. According to Becker, Dibert established the foundation with the goal of focusing on three key areas: youth, education and the arts.

“Of course the band camp is the perfect coming together of working with youth and the arts,” Becker said. “It’s the perfect fit for her … and the foundation.”

The program culminates in a concert for each of the respective camps.

This year the jazz camp concert will be at 1:30 p.m. Friday in Fletcher Music Hall, followed by the string chamber concert featuring select groups from the orchestra camp at 3:30 p.m. in McKnight Hall.

For more information on sponsorship opportunities, contact Tina Downey, director of the Chautauqua Fund, at 716-357-6404 or tdowney@chq.org.