Although technology has increased productivity and sped up communication, author Maggie Jackson believes this advancement has replaced the desire to engage.

“At the time we live in when we’re all so hurried, we expect instant answers,” she said, “and where the knowledge is so abbreviated, we spend less and less time even considering the slow and difficult work of interacting with anyone who truly differs from us.” 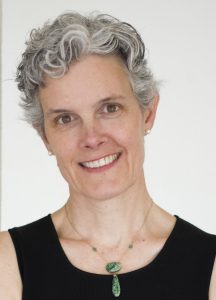 At 2 p.m. Tuesday, July 31, in the Hall of Philosophy, Jackson will address the importance of provocative conversation during her lecture, “Outside the Walls of Our Perspective: How Tolerance Sets Us Free,” as part of the Week Six interfaith theme, “A Spirituality of Work.” Jackson is the author of Distracted, a book that discusses the crisis of losing focus in the digital age, which will have an updated second edition published in September.

As an author and journalist, Jackson has researched technology’s social and cognitive implications. In the working world, she sees a need for individuals to contemplate and respect opposing ideas, a task she calls “work without walls.”

“While this topic on tolerance might seem a little surprising for the week’s theme, I think that it’s really important,” she said. “We need to recapture our ability to get along, particularly with those we differ from. I’ll be talking about tolerance as a really robust, active learning experience.”

To illustrate the importance of engagement, Jackson will present a civil rights era phenomenon uncovered by historian Studs Terkel. Terkel, a Pulitzer Prize winner, reported on an unlikely friendship formed between an African-American sharecropper’s daughter and the local leader of the Klu Klux Klan.

In the 21st century, Jackson said, this remarkable type of relationship and connection is often feared.

“I think discussing tolerance also comes from the fact that we live in what we call the ‘age of anxiety,’ ” she  said, “that’s exactly when psychology and science tells us that humans retreat, that they yearn for the familiar and that they avoid anything that challenges them.”

In addition to examining the history of tolerance and its role, Jackson will also comment on tolerance in modern society. As a journalist, she often writes about social trends in the digital age, and has contributed to publications like The New York Times and The Wall Street Journal.

In her visit, Jackson brings years of reporting, research and writing informed by her curiosity for the digital age and the future of society.

Jackson’s interest in the evolving digital sphere began when she was an international correspondent and covered societal changes she described as “big, broad and brush.”

Upon returning to the United States, Jackson found herself fascinated with American culture the same way she had been fascinated by those she had encountered overseas. Her curiosity led her to ask questions about unforeseen changes the nation faced.

“When I came back, I was just fascinated by American life,” she said. “… I was looking for how everyone was getting along in this new mobile and hurried society. I saw technology becoming more a part of that at a time when everybody thought that the computer was one topic and family life was another.”

In the 1990s, Jackson observed the initial intersection of computers and family life, and found herself asking for a grant to study the “virtual family.”

“I really thought that humanists belonged at the table when we were discussing technology,” she said. “It was a topic at first that was dominated by the inventors, so to speak, the people who knew how to program.”

Now, Jackson finds herself looking even further into the future. She said the world faces a difficult task of adjusting to its new social principles that are now defined by technology.

“It’s hard to recover what it means to fully focus or deeply connect simply because we’re still in the midst of this massive change in our society,” she said. “It’s going to take a long time, I think, to create solutions and understand what kind of humans we want to be and how we want to hammer out a technological society that’s still capable of depth.”

Tags : A Spirituality of WorkMaggie JacksonOutside the Walls of Our Perspective: How Tolerance Sets Us FreeWeek sixWeek Six 2018
previous article