Lisa Corinne Davis is known for incorporating maps as metaphors into her paintings. By doing so, she hopes to allow viewers to experience the same “feeling of being located and dislocated,” 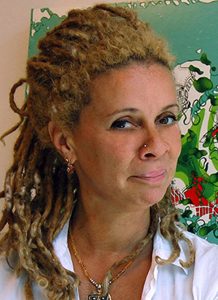 Davis said, that she’s felt throughout her life.

Davis will speak at 7 p.m. on Tuesday, July 10 at the Hultquist Center, as part of the Visual Arts Lecture Series, and discuss her work from the past 20 years.

Davis said she is “always looking for a way to talk about the experience of race, not the politics of race.”

“As a light-skinned African-American woman, I just felt slightly unmoored, dislocated,” Davis said. “I lived in an African-American neighborhood for the first half of my life, then an Orthodox Jewish neighborhood, then went to a white private school. … I just always felt like I was putting the pieces together to locate myself.”

Davis also said that, because she felt she didn’t “fit firmly into a category,” she couldn’t “fight (racism) from a generic place.”

“I just wanted the individual me to be known and recognized and understood,” Davis said.

In a 2014 interview with Studio International, Davis spoke about how she wanted viewers to respond to her art.

“I want them to ask, ‘What am I looking at? What is this about? Where am I located in terms of this?’ ” Davis told interviewer Lilly Wei. “And slowly, very slowly, I want them to begin to answer those questions for themselves — and to change their minds, to not come to a conclusion.”

Davis first visited Chautauqua in 2015. She delivered a lecture about her map-oriented oil paintings and their objective versus subjective characteristics.

“It’s the shifting who I’m interested in,” Davis told the Daily. “As you scan the painting, something shifts and (a form you were looking at) becomes something else.”

Davis said she was “quite moved by the number of great minds and scholars that come through” Chautauqua.

Davis has been teaching college students art for 25 years. She’s taught at Parsons School of Design, Cooper Union School of Art and Yale University, and is currently a professor at Hunter College in New York.

“The idea of teaching was a luxury,” Davis said, “because you could stay engaged in the ideas you’re engaged in while making your own work.”

One professor who influenced Davis was Rosalind Krauss, an art critic and historian Davis called “a ferocious woman” whom she wanted to model her own teaching after.

Davis said art students are learning in a vastly different environment than the one in which she studied.

“I always tell my students I went to school where no one taught anything,” Davis said. “You were thrown into a studio and there’s some paint, and the professor would take off.”

The dynamic for female art students has also completely changed since her time in school, Davis said.

“Nothing is binary anymore,” Davis said, regarding the evolution of feminism in the art world. “Everything is so fluid. The thing about the original movements of feminists was, it was binary, male versus female. So I don’t see feminism as a cause in that sense, but I certainly see that women are determined in the classroom not to let the men speak over them or take over.”

While Davis acknowledged that the percentage of women who leave graduate programs is disproportionate to the amount of men, she still believes that, today, “their voices are much more accepted and valued, and they can be who they want to be; they don’t have to take on a specific role.”

When Davis was in school, she said, those roles were limited. Women aren’t so constrained in the classroom now, but there are still some unbalanced gender dynamics.

“There is, somehow, this behavior often among women. … They got to this level of a good graduate program because they were good students, good daughters, good citizens,” Davis said. “The boys, somehow, give themselves the permission to act out more.”

Although this isn’t true for all students, Davis said that “sometimes women can sit back and not realize that they have permission to rebel and be loud and be aggressive.”