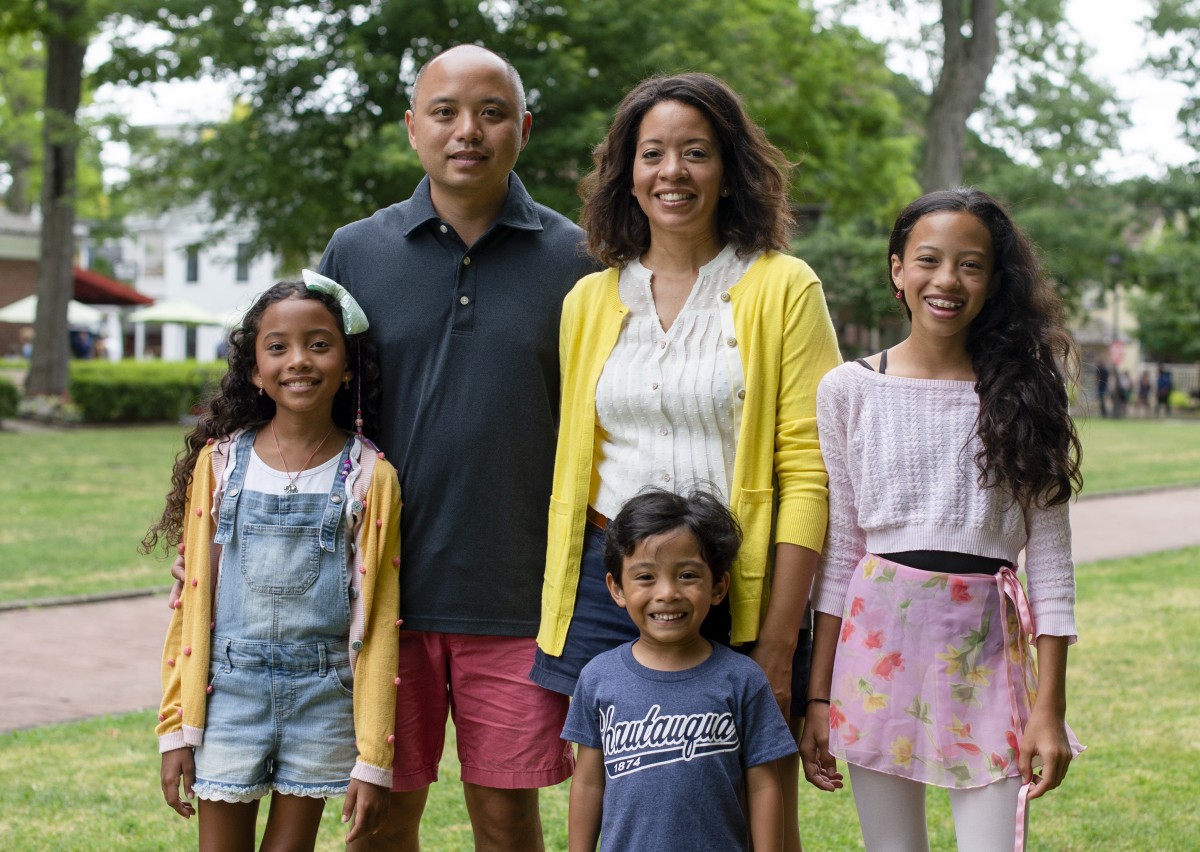 The Nebres family is always moving, and their time at Chautauqua Institution as Family Scholarship recipients was no exception.

“The days were incredibly full, and there were so many moments when we would just sit in amazement at the beauty of the grounds and all we could accomplish in a a single day,” Danielle Nebres said. “We ended each day thinking surely this was the best day ever, and then the following day would bring more surprises.”

Each season, the Institution offers first-time Chautauquan families an opportunity to immerse themselves in the Chautauqua experience. The Family Scholarship program, funded through Chautauqua Foundation endowments, covers gate pass costs, tuition for Special Studies classes, children’s activities and housing for one week.

The Nebres family spent Week Four, themed “Russia and the West,” on the grounds. Dance brought the family to the Institution. Libby, 12, and Charlotte, 10, are both students at the School of American Ballet in New York City and auditioned for the School of Dance summer ballet mini-intensive weekends.

When they were accepted, it created a challenge for the Nebreses — the intensives were scheduled for two different weekends, which required the family to commit to staying at the Institution for a week in between. While attempting to secure lodging for their stay, Danielle Nebres said she stumbled upon the Family Scholarship.

“Applying for the Chautauqua Family Scholarship was an exciting process for our family,” Danielle Nebres said. “The application included a few essay questions to help learn more about our family and what we would like to experience at Chautauqua. This helped us start a conversation with our kids about our interests. …  It was fun for the kids to think about trying out some new hobbies and hear what classes their parents were interested in taking.”

During their time at the Institution, the Nebres attended Special Studies courses, 10:45 a.m. morning lectures and 8:15 p.m. evening performances. Joe and Danielle Nebres enjoyed sending their three children off to programming while they began the day with coffee and morning worship. Danielle Nebres, a stay-at-home mom and Girl Scout troop leader, signed up for courses in conversational French and sailing; Joe Nebres, an online media production supervisor, participated in harmonica and sailing classes.

“Being at Chautauqua feels like you’re on family vacation on a college campus where you can audit high-level academic courses or attend only the lectures you’re interested in,” Danielle Nebres said. “… There is so much to do, but it’s also the perfect place to do nothing at all.”

Outside of the lectures and classes, the Nebres made an effort to attend as many artistic performances as possible.

“Someone at the dance school recommended that the girls sign up for the (Pilobolus) master class, and it really changed the course of our week,” Danielle Nebres said. “The kids were so inspired by the class and that evening’s Pilobolus performance that we kept taking them back for more. The performances were stunning and left us all awestruck. The girls felt so special to have had class with them. Joe and I even joined a couple of their classes.”

Their son, Nathan, 4, joined the family in their dance excursions, as well as the family’s bike rides. Before this summer, Danielle Nebres said, her daughters couldn’t ride bikes, but now it’s almost impossible to tell they just had the training wheels removed.

Libby and Charlotte, when not in ballet class, took to the lake.

“Libby really enjoyed sailing lessons, and Charlotte loved kayaking,” Danielle Nebres said. “Both have asked to continue those activities. I joined Libby on a guided sail and saw her in action using her new skills. It felt great to see her discovering a completely new hobby.”

While in the lake, Charlotte Nebres discovered underwater clay; she promptly brought the wet, messy glob home — to her mother’s dismay. Fearing that the clay would get discarded, Charlotte formed it into a replica of Miller Bell Tower, dried it out and then painted it the minute the family returned home to Madison, New Jersey, as a gift.

The family has been “bitten by the bug and are determined to be lifelong Chautauquans,” Danielle Nebres said.

“Now that we are back home, I have found myself being more likely to strike up conversation and make an effort to connect with others,” she said. “Chautauqua sets the stage for casual conversations with friendly strangers that often become intellectual conversations. It was in those conversations that I was surprised at how quickly you can discover common interests and common ground with others.”