Over the last 250 years or so, the definition of Judaism has grown “more and more complicated,” said Ori Z. Soltes, Goldman Professorial Lecturer in theology and fine arts at Georgetown University.

Soltes presented his lecture, “Obvious and Obscure: Moments that Have Transformed Judaism,” as part of Week One’s interfaith theme, “Religious Moments That Changed the World,” Tuesday, June 25 in the Hall of Philosophy.

“Is (Judaism) a religion?” Soltes asked. “Is it a body of customs and traditions? Is it a culture? Is it an ethnicity? Is it a nationality? Is it a civilization?”

Soltes said all of these questions apply to the definition of what Judaism is, leading to the logical thought that it would be unfair to strictly define Judaism as a religion, as that would construct boundaries and limitations.

This was the first complication that came with defining Judaism. The second complication was time — when does Judaism begin?

“If I talk about Abraham, most Jews would say that he is the beginning, but then of course Muslims and Christians would say the same for their respective faiths,” Soltes said. “And they’d all be right, and they’d all be wrong because, in fact, he’s not called any of the above in Genesis. He’s called a Hebrew.”

Soltes said the term “Hebrew” has no religious or ethnic connotation, but rather, a socioeconomic one. To be a Hebrew was to be someone who moved from place to place. Soltes moved forward through history and came to Moses, who was also not referred to as a Jew nor a Hebrew, but an Israelite. And when he came down from the mountain with the Ten Commandments, they were to be followed by the Israelites, who would later establish the Kingdom of Israel. Despite the lack of the actual term “Jew,” Soltes began tracing the history of Judaism from this moment.

After the death of King Solomon, that kingdom dissolved, and the northern part continued to be known as Israel, and the southern part was called Judah, named for the larger of the two tribes, Judah and Benjamin, Soltes said. After the Assyrians took over Israel, Judah and Benjamin were the only two tribes left of what had been the Kingdom of Israel. Judah specifically became important, too, in 586 B.C.E., when the Babylonians took control of Jerusalem, because they carried the Judeans “into exile.”

“When one is defeated by someone else, when one’s temple or temples is or are destroyed by someone else, the conclusion one arrives at inevitably is that their god or gods must be stronger than yours,” Soltes said. “So, you don’t continue to worship your god, you worship theirs. But (the Judeans) don’t.”

Rather than subjecting to the authoritative power, the Judeans reasoned that their god, the God of Israel, the Judean God, caused the destruction because he was punishing them for not paying attention to the prophetic voices of which, at that time, the most recent was Jeremiah.

Other important lessons the Judeans learned in exile were that they could still address God by reading, praying and discussing God’s word, and if they turned back to God, God would eventually turn back to them, Soltes said. These were particularly important lessons learned when, in 50 years, Cyrus the Great overwhelmed the Babylonians, expanding his empire to an unbelievable size, and allowed the Judeans to rebuild their temple.

“This is also the first time that the term ‘messiah’ is used to refer to Cyrus, anointed by the hand of God so that he could assist the Judeans to go back and rebuild their temple,” Soltes said.

A century after the Judeans returned from exile, in 444 B.C.E., Ezra, a high priest, organized the text of God’s word. With this organization of the text, the Judean community changed from a theocracy — which means power by prophets, by priests, by those who are assumed by their constituents to have the ear of God — to a nomocracy, which is power by law. This change proved important in the future.

“If we fast forward half a millennium, we find the Judean world struggling to assert its political independence from the Romans because the Romans are embracers of any and all faiths, provided you are not politically subversive,” Soltes said.

Because of the Roman dominance, some Judeans believed that Judea needed to regain the political independence that it lost, and the revolt of 65 C.E. resulted in the destruction of the temple in the year 70 C.E. A second revolt would ensue 65 years later, known as the Bar Kokhba revolt, which took the Romans three years to suppress.

“The outcome of this was, for the first time in Roman-Pagan history, Judeanism began to be treated as a subversion,” Soltes said.

This was a brief phase because, after the death of the Roman ruler who put the status in place, his successor revoked the status. In addition to this temporary status, another important development had taken place between the destruction of the temple and the Bar Kokhba revolt.

“The Judean community started to more substantially split between Judeans who believed Jesus was something special, called Judeans for Jesus, and Judeans who did not,” Soltes said.

This idea of Judeanism, though, began to transition into Judaism coming into the second and third centuries, specifically with the canonization of the Hebrew bible in the year 140 C.E. and the organization of the Mishnah in 212 C.E. Meanwhile, the Roman empire moved toward becoming Christian — a religious transition that became problematic for the followers of Judeanism.

“As the centuries move forward, distinguishing infidels, nonbelievers, from heretics, mis-believers, from Jews who are neither this or that will continue to be problematic,” Soltes said. “In 381, Theodosius makes Christianity the official religion of the empire. … Judaism now begins to be thought of as subversive.”

The Jewish people were viewed as a threat to the community, and things grew even worse at the fourth Lateran Council in 1215 C.E. because, during this council, much time was spent discussing what should be done with the Jews. For those in the council, Soltes said, the Jews were not completely heretics and they did not fall under the category of schismatic, and they were not infidels. But they were also not Christian.

As a result of the council, it was decided that Jewish people needed to be identified. The council agreed that Jews needed to wear upon their clothing some kind of symbol that allowed people to know who they were. One symbol was a hat with a horn, and the other was a yellow circle or square, Soltes said.

Then, in the early part of the 15th century, Jewish massacres took place in Spain. To make the situation worse, in August 1492, King Ferdinand II of Aragon had enforced an edict of expulsion, leading many Jews to join the staff of Christopher Columbus before he set sail on Aug. 2.

“It would seem that any number of those individuals were thinking, ‘Can we find someplace else to go to, besides back to some other part of Europe, back into the Muslim world?’ ” Soltes said. “Ultimately, of course, Jews for the first time would be thinking about America with Columbus in 1492.”

However, Soltes said that by the end of the 18th century, Jews were welcomed into mainstream cultures, society and economics thanks to political revolutions like America’s own revolution in 1776. In 1790, George Washington visited and communicated with a Jewish community in Newport, Rhode Island, where he left a letter at their synagogue. Soltes quoted the letter: “Ours is a government that happily gives to bigotry no sanction, to persecution no assistance.”

With the 19th century and its surges of romanticism and nationalism all over the world, there was a call from a book written by Moses Hess, who declared the Jewish people could become great once more. By the end of the 19th century, the first Zionist Congress was held in Switzerland. European Jews were insulted, however, when Wilhelm Marr, a German publicist, wrote that the Jews could never be German and could never be European because they were Semites.

Soltes then went through additional events from World War I to present day — including World War II,  the Holocaust, John F. Kennedy’s election, the Eichmann trial in Jerusalem, the assassinations of Martin Luther King Jr. and Robert F. Kennedy; the assassination of Yitzhak Rabin, prime minister of Israel, in 1995; the election of Barack Obama in 2008; and the election of Donald Trump in 2016. Soltes said these events have been important to the development of Judaism and the Jewish people, and concluded that the world today is in crisis.

“Jews, like everyone else around us, find themselves at a kind of crossroads right now,” Soltes said. “In America, we are wrestling with whether we will follow the want-to-be path carved out in the mid-19th century by those who want to limit those who can come here, or whether we will follow the path that is signified by Washington’s letter about what we find in the Constitution and Declaration 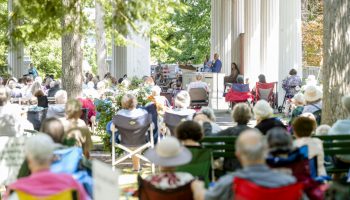 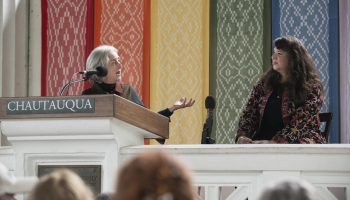 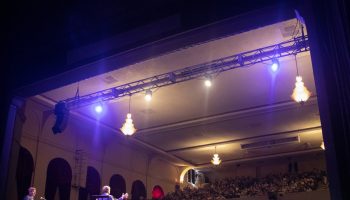 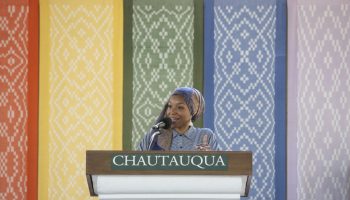