CSO to Take Audiences to ‘Galaxy Far, Far Away’ With ‘Star Wars’ Concert and Film

If you find yourself with no plans tonight, there’s a new hope for you.

Directed by George Lucas, “Star Wars: A New Hope” launched a global phenomenon when the film premiered in 1977. With a cast of beloved characters — and now a decades-long legacy — the film received six Oscars and a Special Achievement Award from the Academy — among numerous other accolades — including Best Original Score.

Williams’ score for “Star Wars: A New Hope” rocketed to its current iconic status. Parts of the score have hit top charts in multiple countries since the film’s 1977 premiere, and it includes some of the best-known themes in recent history.

Chafetz said Williams’ score is an integral part of the film — and the live orchestra accompaniment will highlight the score’s important role for the audience.

“The thing that ties the movie together is John Williams,” Chafetz said. “Not only is he a good composer, he understands how to help accentuate the story with music. When you see Luke come onto the screen for the first time, you hear his theme. When you see Princess Leia’s first appearance, you hear her theme. And I’m hoping that the audience will cheer every time something like that happens.”

Chafetz, who is known for his lively podium demeanor, has conducted several movies-in-concert. These movies include “Jurassic Park” and “The Nightmare Before Christmas” — a concert that drew dozens of costumed fans. Chafetz described such concerts as similar to “a modern ‘Rocky Horror Picture Show’ ” because of the enthusiastic audience.

“When we have the classical audience, it’s like preaching to the converted — they already know and understand the orchestra,” Chafetz said. “But very often, with these concerts, you’ll have people in the audience who’ve never heard a symphony orchestra. When they see ‘Star Wars’ live in concert, they’re going to come and they’re going to say, ‘Wow, this is what an orchestra sounds like. I had no idea, this is fantastic.’ ”

“For me, reaching that part of the community is part of our mission — we’re reaching the people who already love classical music, but we’re also reaching out to everyone else,” Chafetz said.

The CSO performs a vast range of music, from 17th-century classical masterpieces to contemporary showtunes and scores. Chafetz said the orchestra’s flexibility is admirable.

“It says a lot about the Chautauqua Symphony — that they can play ‘The Rite of Spring’ the night before and play a movie score and play an opera and play pops,” Chafetz said. “They’re world-class.”

In fact, Chafetz said movies-in-concerts enrapture audiences even more than the original films.

“I think it’s amazing because normally, when the end credits start to play, people leave,” Chafetz said. “With these concerts, so many people stick around for the end credits because music is playing underneath it. It’s an unbelievable experience to be a part of it. It’s an overwhelming sensation to hear a live orchestra with the
movie.”

On 65th Anniversary, Heritage Lecture to Examine Lasting Legacy of ‘Brown v. Board of Education’ 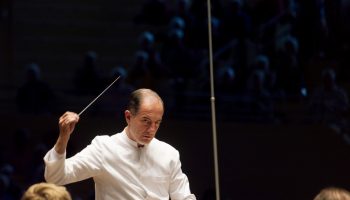