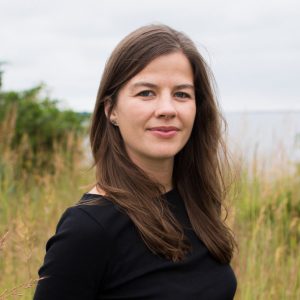 As she wrote and researched coastal communities represented within Rising: Dispatches From the New American Shore, Elizabeth Rush found herself following the rampikes. Coupled with the lyric essays that fill her book are her own black-and-white photographs of the brittle trees, dead from saline inundation forced upon them by rising sea levels.

“I see them everywhere,” Rush said, describing the salt-riddled trees as “photogenic, but lyric, visually,” a deliberate move away from the images of flood-ruined homes or starving polar bears that typically accompany writing on climate change. She chose the rampike, in part, because it “gives you space to meditate on the issue.”

“A lot of our climate change conversation tends to focus on the apocalyptic,” she said. “(These photographs) are not going to sell a newspaper, but they tell a story.”

The once-living trees are stark proof of the changing climate to which the book bears witness, and a pattern Rush observed only as she herself traveled along the ocean’s edge.

“Writing a book is a process of discovery,” Rush said. “You shouldn’t know when it’s going to end when you start working on something so big.”

Five years in the making and a finalist for the Pulitzer Prize in General Nonfiction and for the 2019 Chautauqua Prize, Rising is an elegy for a retreating shoreline and those who endure there, textured with testimony from coastline residents and her own personal reflections on loss and resilience.

Rush — taking a pause from writing a book about her time aboard an expedition to the calving edge of Antarctica’s Thwaites “Doomsday” Glacier — will give her Chautauqua Literary and Scientific Circle Author Presentation at 3:30 p.m. today, July 11, in the Hall of Philosophy.

Atom Atkinson, director of literary arts, sees Rush’s presentation as not only a new way of thinking through the week’s “A Planet in Balance” theme, but also “an exciting opportunity to show what it looks like when a poet does reportage and how that looks different, especially right after Dopesick (a Week Two CLSC book by Beth Macy).”

“It’s not just the incredible sentences; (Rising) also plays out in a way that reflects a sort of poet’s mind,” they said.

Most reviews of Rising, like David Biello’s in The New York Times Book Review, echo Atkinson’s characterization, and include at least one or more derivatives of the word “poetic.” Like Atkinson noted, the descriptor extends beyond Rush’s lyrical command of language.

She studied poetry and environmental literature at Reed College — “I always wanted to be an environmental writer, but so did half of the state of Oregon,” she said — and, in a 2018 interview for The Rumpus, told Lucia Graves she considers herself “a poet first.” As an undergraduate student writing and revising a collection of lyric poems about women’s bodies and the environment, Rush received a piece of advice from the poet Katie Ford that she carries with her still: “Edit toward exactitude but in the mystery.” 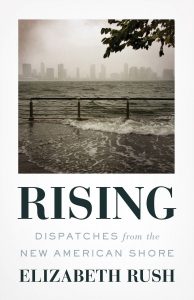 “Most people don’t want to be told how to think,” Rush said.

As a writer, “you want to make an image — something sharp, something exact” while simultaneously avoiding the “prescriptive.” Like the image of the rampike, the page should “leave space for the reader to think for themselves.” It also means that there is more room for delicacy and grace, a significant departure from typical climate change writing that tends toward, according to Rush, the “emotionally cool.”

“Nonfiction isn’t always engaged with creating the most beautiful work, and in writing Rising, I wanted to craft it in such a way that the language had a little bit of a power to intoxicate and to keep people engaged,” Rush told Graves in The Rumpus interview. “There was an idea that heightened language could help engage some folks who might find climate writing a little dry or easy to walk away from.”

She looks to Eula Biss’ On Immunity and Maggie Nelson’s The Argonauts as examples of nonfiction that converges the philosophical and personal. Guidebook to Relative Strangers: Journeys Into Race, Motherhood, and History by Camille Dungy, is another favorite, as is Refuge: An Unnatural History of Family and Place by Terry Tempest Williams. Like Rush, Dungy and Williams are both environmental writers interested in the interactions between human beings and what Rush calls “the more-than-human world.”

“(My relationship to nature) starts with a sense of awe and appreciation, and then quickly moves into a much deeper understanding that human beings and the more-than-human world are not separate at all,” Rush said. “We’re very intertwined and interdependent.”

In her 2015 book Still Lifes from a Vanishing City: Essays and photographs from Yangon, Rush, who has lived and reported extensively in Southeast Asia, records the stories of individuals evicted from their homes in Yangon, Myanmar, against the backdrop of the country’s independence from military rule. It wasn’t until two or three years into her research for Rising that she realized the same questions at the center of Still Lifes seeped through to her newest project.

“How do you define your relationship to home?” Rush asked. “How do forces seemingly beyond your control make you reimagine that relationship? What are the other elements that make somewhere home that you can carry on through relocation?”

Perhaps most importantly, she said, “Still Lifes from a Vanishing City taught me that there’s often an official story of a particular political moment or historical moment, but that people’s lived experience might reflect something really different.”

At the heart of Rising — a book that bypasses expressly political discourse in favor of first-person narratives and, sometimes, stories transcribed directly from the mouths of those affected by floodwaters and erosion — is a democratization of climate change discourse.

Rush knows that many people of her race and class “don’t necessarily live on the front lines” of climate change and so the book centers people of color and poor communities. The challenge, then, is writing in a way that renders climate change an accessible issue. One way to do that, Rush argues, is by side-stepping scientific jargon and other language that could be perceived as alienating.

“How do we make (climate change) not just an issue that folks with enough money to escape to the wilderness in the weekend care about and talk about and vote on?” Rush asked. “I think we need to be a little bit looser with the rhetoric and words that we require and use (when talking about climate change). One of the key basic kinds of labor that climate discourse demands is that we imagine ourselves into other people’s shoes.”

As of last Friday, Rush was about “300,000 words into a shitty first draft” of her book on the Thwaites Glacier, a Florida-sized continent of ice whose slow collapse is one of the most menacing harbingers of global sea rise. She still sees hope in an “upwelling of climate change activist movements,” and a greater awareness of the imminent threat to coastal communities.

She reads her fan mail, too, most of which is from individuals affected by the surging waters she chronicles in Rising.

“Thank you for sharing a story that maps onto my lived experience,” she said, paraphrasing the content of the letters and emails she finds most gratifying. “Thank you for helping me realize we’re not necessarily alone in this.” 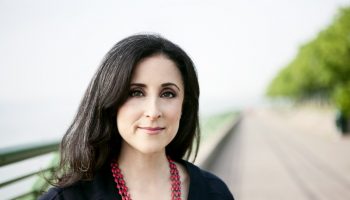 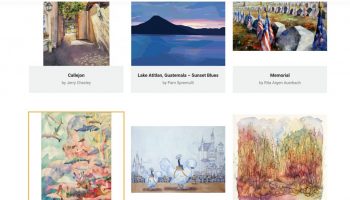