If the Alumni Association of the CLSC is the heart of Chautauqua, then this Sunday might just be its biggest annual workout. Featuring the Silent Auction, and coupled with the Brick Walk Book Walk and Authors Among Us Book Fair, the 41st annual Great American Picnic will be part of an afternoon filled with the sizzle of burgers and smell of new books.

The funds raised by the Silent Auction, an event that began Wednesday and continues until 2:30 p.m. Sunday, July 14 have historically been earmarked for the Literary Arts Center at Alumni Hall. Now, the money goes to scholarships benefitting Chautauqua County high school students, sponsoring an all-expenses paid week at the Institution — including a writing class at the Young Writers’ Institute and housing with a host family. Last year, the Silent Auction raised over $8,000.

“We’re looking for that kind of success again this year,” said Cate Whitcomb, executive secretary of the Alumni Association of the CLSC.

This summer, thanks in large part to the capital gained from the 2018 auction, Chautauqua welcomes nine teacher-recommended, rising high school seniors to the grounds. Whitcomb, whose mother came to Chautauqua in 1945 on scholarship from the CLSC Class of 1913, helps coordinate the program.

This year, Alumni Association opportunities expanded to include Chautauqua County teachers and librarians. This new scholarship funds a week-long class at Chautauqua every year for four years, CLSC membership, graduation and books. It is the Alumni Association’s hope that these adult scholarship recipients will establish reading “circles” to extend what they have learned from their CLSC books in a ripple effect of lifelong learning.

“The point is to keep educating people and keep it going outside the grounds,” Whitcomb said.

Past treasures up for bid at the Silent Auction include a bicycle, a kayak and a pinball machine. This year, Whitcomb anticipates more antiques: jewelry, decorative items and ornate birdcages. There might even be a set of Spode china for an ambitious collector.

“This woman (who owns the china) is having some trauma about parting with it, but she said it’s all packed up and she’s putting it in the car,” Whitcomb said.

In previous auction years, Whitcomb has secured earrings and wine at a respectable price.

“Somebody had donated the wine, and my contribution is a tax deductible gift to the CLSC, so everyone comes out ahead,” she said. “I got a tax deduction, they got a contribution and I got four bottles of wine.”

Although the dining room is usually “stuffed with things, spilling out into the hallways” for the presale on Wednesday, Thursday and Friday, almost everything sells by Sunday, Whitcomb said. And then the cycle begins again — they start collecting “as soon as (the picnic) is over.”

“The tradition of it (excites me),” Whitcomb said. “The idea that this is the 41st one in a row, it’s a nice, innocent, happy tradition. … The place is always just running over with kids. It’s a way for families on a Sunday afternoon to have a fun recreation. And I love anything that continues and doesn’t just stop for lack of interest.”

Whitcomb sees this community engagement in even the smallest planning details. She recently sent out a call for donated baked goods to accompany the hot dogs, potato salad and chips for sale.

Concurrent with the picnic is the Brick Walk Book Walk, an event introduced last year by Atom Atkinson, directory of literary arts. Atkinson organized the Book Walk at the top of the 2018 season as a “useful hinge” between the Chautauqua Writers’ Festival and the rest of the season, and to introduce Chautauquans to the Poetry Makerspace, which then resided in the Colonnade.

This year, Atkinson and the literary arts team wanted to ensure people were directed visually down to the grove for the Great Amerian Picnic and the special discounts at the CLSC Octagon. The Chautauqua Bookstore and Smith Memorial Library will be running their own promotions and activities.

“As a result, we have a very vibrant set of options — including dining options — at each end (of the Book Walk),” Atkinson said. “It’s great for people to see just how much literary activity there is and that it’s not contained in just one part of the grounds.”

Norma Rees, former president of the Chautauqua Literary Arts Friends and organizer of the Authors Among Us Book Fair, is excited to provide local authors with a venue that attracts the broader literary arts and Chautauqua community.

“Last year was so successful — we actually started out with eight signed-up authors, and people came up and said, ‘Oh, I didn’t know. Can I please?’ and we ended up with 15,” Rees said. “This year we’re starting out with 15, so we’ll see how many we end up with.”

Responsible for their own sales, authors decorate tables lining the brick walk however they see fit.

“Some people have a lot of sales. … This might be their third year showing,” Rees said. “Others don’t have so many sales, but they are really grateful for the opportunity to network and to interact with the public.”

Sunny skies are predicted for Sunday, and Rees said she isn’t too worried about a potential storm.

“I have been shone on for the last four years, so I’m optimistic,” she said.

A Trio for a Trio: CSO String Musicians to Make Chamber Debut

In Open Recital, School of Music Students to Present Broad Range of Works 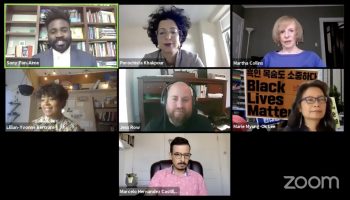