According to Jared Jacobsen, Chautauqua’s organist and coordinator of worship and sacred music, some of the most interesting music in America was written by the modernist composer Charles Ives.

“Ives had a very unique way of looking at music,” Jacobsen said. “His father was a bandleader who was very well-known in New England, and (organized) these huge festivals in their town. He would invite bands to march into the town square at the same time from every direction.”

Hearing the sounds of multiple bands overlapping each other as they played became a crucial part of Ives’ childhood and deeply affected his musical composition process, Jacobsen said.

Jacobsen said Ives incorporated bands playing over one another into his music, leading the way on compositional concepts like bitonality, polyrhythmia, altered tunings and altered scales.

At 12:15 p.m. Wednesday, July 3 in the Amphitheater, Jacobsen will showcase distinctly American composers, like Ives, on the Massey Memorial Organ in the mini-concert “The American Organist.”

“These are all the pieces that I, as an American, play on this American organ, in the most American place in America,” Jacobsen said. “Ironically though, the idea for the (Massey) Organ was conceived in Canada and funded by a Canadian family.”

But, he added, the Massey Organ is “essentially a part of American history.”

Jacobsen said he designed the musical program for this mini-concert to complement the rich history of the Massey Organ, which is over 100 years old, and to anticipate Chautauqua’s Fourth of July celebration.

American Composer Dudley Buck’s “Concert Variations on ‘The Star Spangled Banner’ ” is one piece Jacobsen said he included specifically because of the Fourth of July.

“He’s important because he grew up in New England and got a really good American music education,” Jacobsen said. “Then he was sent to Europe by his parents to get the European stamp of approval.”

According to Jacobsen, people in the late 19th century believed that unless a composer had studied in Europe, they couldn’t be any good.

“They thought that since this was the Colonies, we didn’t know anything about making music,” he said, “which was totally bogus.”

Yet when Buck returned from Europe, according to Jacobsen, he became one of the first American organists to have a career as a touring concert artist, traveling up and down the Eastern seaboard.

“Dudley Buck’s piece, which is a blast to play, is a classic 19th century variation for the keyboard,” he said. “Variations involve starting with a tune, gently playing with it for a little bit, and then getting more adventurous with the rhythms or the chord structure. Because this is an organ piece, there’s always a part that shows off what your feet can do on the organ.”

Variations like Buck’s have a uniquely American flavor to them, according to Jacobsen. 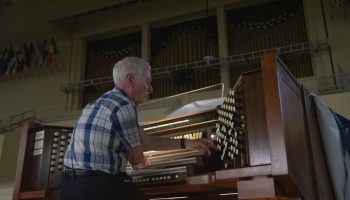 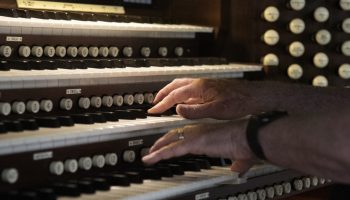