Under the Streetlamp to Play Retro Classics in Amphitheater Tonight 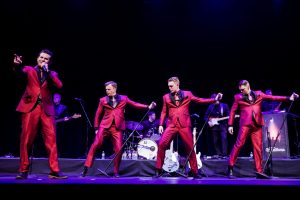 Chautauqua will take a trip back in time when retro cover band Under The Streetlamp takes the stage to perform some of the 20th century’s greatest hits. Under the Streetlamp will rock ’n’ roll at 8:15 p.m. tonight, July 12, in the Amphitheater.

The band is all about breathing new life into songs, primarily from the 1960s and ’70s, though they have performed music from as far back as the ’20s, and as recent as 1980. Under the Streetlamp takes all their music from what founding member and choreographer Shonn Wiley called “the American radio songbook.”

Under the Streetlamp got started when Wiley and the other original members met during a Chicago production of Jersey Boys, a musical about Frankie Valli and The Four Seasons. Wiley and the others decided to dive into ’60s music outside of the show, performing around Chicago and  gaining traction within the city’s scene. They filmed several shows that aired on PBS, and received an enthusiastic response from many new fans. They have toured all over the country, including Chautauqua twice before in 2012 and 2015.

The name of the group comes from “a sense of where this music was first created,” Wiley said. Decades ago, musicians and singers would play and sing in the streets of large metropolitan areas, especially on the East Coast and in Chicago and New Orleans, while others watched from door stoops and street corners. As night fell and the streetlights lit up, the performers would go on playing under the streetlamps. This, Wiley said, was the birth of doo-wop, rock ’n’ roll, jazz and rhythm and blues.

It also comes from a line in Jersey Boys, Wiley said, when Valli ruminates on his fame and what the high point of it all was, and concludes that it was not the fame at all, “But four guys under a street lamp, when it was all still ahead of us, the first time we made that sound, our sound. When everything dropped away and all there was, was the music. That was the best.”

Whereas Postmodern Jukebox, who performed at Chautauqua in Week One, gives new music a vintage twist, Wiley said, Under the Streetlamp makes older music sound new by performing it live with high energy and dance numbers.

“Retro is in fashion,” Wiley said.

Though the music they play is from past decades, Wiley said it’s for everyone, especially when played live. It is not uncommon to see people from three different generations at their concerts.

“It’s a testament to the music,” Wiley said. “Great melodies, awesome harmonies, really great groove (and) exceptional songwriting during that period of time. There’s really something for everybody.”

Though some of the original members have left the band to do other things, the spirit of the group remains the same. The band is currently comprised of three other main singers: Eric Gutman, David Larsen and Brandon Wardell. The personalities and preferences of all four members make the show more varied and exciting, as each performer gets to sing some of his own favorites.

“When you get an opportunity to bring new folks in, it’s not necessarily replacing the people who were there before but adding to the energy and the culture, and we’ve done that every time a member has left,” Wiley said.

Under the Streetlamp’s shows are more informal than not, and the group encourages the audience to dance, sing and lose themselves in the music.

“We take the music seriously, but we don’t take ourselves too seriously,” Wiley said.