Romanticism, jazz and classical grandeur are in the cards for recital-goers today.

“None of them are easy works,” Taylor said. “They all push pianistic techniques kind of to the limit.”

Taylor will start off with a piece by contemporary Russian composer Nikolai Kapustin, from his 24 Preludes in Jazz Style, Op. 53. Kapustin’s work is something of a hybrid between jazz and classical piano; Taylor described it as “halfway between Rachmaninoff and Oscar Peterson.”

“They show his basic personality and a couple of different facets of it,” Taylor said. “(It’s) generally very engaging and certainly virtuosic music — lots of work for the fingers.”

Next, Taylor will launch into Ludwig van Beethoven’s Symphony No. 2 in D Major, Op. 36, transcribed for single piano by Franz Liszt. Liszt transcribed all nine of Beethoven’s symphonies, and it has been an ongoing project for Taylor to learn all of them. The distillation of a piece written for a whole orchestra into one instrument makes for a massive and spirited work, and a great challenge for the pianist. Symphony No. 2 is one of the lesser known of Beethoven’s symphonies, but it is full of youthful agility and high speed.

“Beethoven symphonies have this sort of unstoppable energy to them,” Taylor said. “There are not huge opportunities to relax and breathe when you’re up on stage.”

The recital will then take a turn into the Romantic, as Taylor performs Johannes Brahms’ Four Ballades, Op. 10. Though Brahms wrote this piece in his early 20s, it has maturity and weight comparable to the sort of works he composed near the end of his life. Though not as spectacular and demanding as the Beethoven symphony, it necessitates disciplined playing.

“It certainly requires a great deal of control and an understanding of the instrument to create these rich and colorful and evocative effects,” Taylor said.

Finally, Taylor will finish his performance with Sergei Rachmaninoff’s Moments Musicaux, Op. 16. Though it was written early in Rachmaninoff’s career, it has the characteristic bittersweetness that is typical of his style. It is a poignant piece, Taylor said, that begins as haunting, melancholy and bleak, but moves toward triumphant at the end.

“It will make for a nice rousing and sort of satisfying conclusion,” Taylor said.

Most of these pieces are relatively new to Taylor, but that newness makes them exciting to him. One of the best things about playing piano, he said, is the near limitless repertoire that always provides something new to learn.

“It’s always fascinating and exhilarating,” Taylor said. “It’s a constant learning experience, and that’s what keeps me going in this job.”

Since the pieces are off the beaten path of the common piano repertoire, the recital will provide the audience a chance to discover some pieces they may not have ever heard live before.

“I hope that not all the music will be familiar,” Taylor said. “I hope to introduce (the audience) to something fresh. … I hope to cover a broad emotional territory and show some of the things that the piano is capable of.”

As a guest member of the School of Music faculty, Taylor will also be giving a public master class to piano students at 4 p.m. Wednesday, July 31 in Sherwood-Marsh Studios. 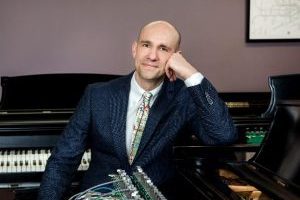