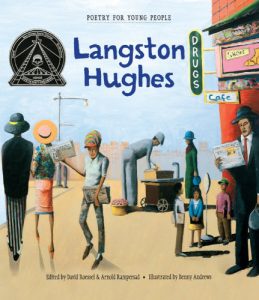 For Week Nine, “Exploring Race and Culture in America with Wynton Marsalis and Jazz at Lincoln Center,” the CLSC Young Readers are taking a look back in time to the Harlem Renaissance with poet Langston Hughes.

At 12:30 p.m. Wednesday, August 21 at the Poetry Makerspace, CLSC Young Readers will gather for a program on the prolific poet to learn about a time in history that changed American culture forever. Week Nine spotlights two works: Finding Langston, by Lesa Cline-Ransome, and Poetry for Young People: Langston Hughes, edited by David Roessel and Arnold Rampersad.

Finding Langston follows a boy of the same name soon after the passing of his mother. Langston and his father move from rural Alabama to the Bronzeville neighborhood of Chicago, where Langston is teased for his “country accent.” But after visiting his local library, Langston stumbles across the works of a man by a similar name: Langston Hughes.

He begins to read Langston’s books in short segments, hiding them away from kids at school and even his father, using the words to keep his mother’s memory alive within him.

“The library and Langston Hughes ’bout the only thing that kept me going without my mama,” Langston says in the book, indicative of the power of literature against the power of grief.

Including the selection of Poetry for Young People adds to the strength of the week’s theme, according to Karen Schiavone, manager of community education.

Schiavone said she felt that both texts were necessary to engage young readers in a number of ways. Using a book like Finding Langston, she said, could foster a deeper connection with the poet by using a narrative of intergenerational interest in the works. She also said the use of Hughes’ poetry would help to engage the readers in a different type of narrative.

“I found Finding Langston first,” Schiavone said. “It just seemed like a really sweet story, and with the links in Hughes’ background, it seemed like it would be a great fit for our week on race, culture and jazz.”