Before 1895, Chautauqua was missing its fourth pillar. The Institution now stands on the pillars of education, religion, recreation and the arts, but until Ellen Gates Starr brought the arts to the grounds, the Institution had yet to build a solid foundation.

Starr was the co-founder of Chicago’s Hull House, but she was more than that; she was an artist, an educator, a social reformer, a sociologist and a politician.

At 3:30 p.m. Tuesday, August 6 in the Hall of Philosophy, Annie Storr, resident scholar at Brandeis University who holds disciplines in both art history and public education, will present “Ellen Gates Starr of Hull House and the Art Program of Chautauqua,” as part of the Oliver Archives Heritage Lecture Series.

In college, Storr studied art history and public education, which she called an “unusual mix.”

“The scholarly side of me was interested both in art history,  the history of our education and the people who created our education around art — one of those people is Ellen Gates Starr,” Storr said.

Starr is most famously known for being the co-founder of Chicago’s Hull House, a settlement house that was created to enlighten the lives of the immigrant population in Chicago, that later became the model for over 1,000 institutions. Starr was responsible for the creative half of Hull House’s programs and was considered to be the “champion” and “protector of the arts.”

Storr was first drawn to Starr when she began to research the opening and closing of Hull House and its art programs. Through her research, she didn’t find much information on Starr’s personal biography aside from being a co-founder of Hull House. Even in what she did find, Starr’s work was lost in Jane Addams’ shadow.

“I discovered that there were so many mistakes in her biography and that I am going to have to reconstruct her life story in order to answer the questions I had about arts education being a part of social reform — I have been doing that now for 14 years,” Storr said. “Using my skills as both an art historian and as an educator, it turned out to be the perfect topic because it uses both of my fields.”

One of the places Starr led Storr in her research was Chautauqua — it was the summer of 1895 when Starr started the Institution’s art history and criticism program.

Also in 1895, Starr stood before Chautauqua’s board to advocate for arts education for all children in America. She was then asked to lecture at the Institution on the relationship between morals, values, esthetics and art — and she did.

“(Starr) both taught the first art history and criticism course at Chautauqua, and she was kind of the champion in including art as part of the basic human development in the Chautauqua style at Chautauqua,” Storr said.

Storr believes that Starr’s work aligns with the Week Seven theme, “Grace: A Celebration of Extraordinary Gifts,” because in her determination, she gave the “gift of art” to many.

“In the art world there is a strong wave of interest and concern about how to combine the arts and activism, … and she was both — she was both every day of her life,” Storr said. “She somehow found a way to use her creativity in her political work, in her education, in her teaching and in her art.”

Storr said many people wrestle with the personal question: “Are arts relevant to today’s social problems?”

“We know much more about human development, neuroscience and the psychology of being a fulfilled person, so what she knew, on a hunch, we know now that by having a creative part of your life is sustaining, even if your life is very toxic,” Storr said.

Storr believes creativity is a vital part of longevity and emotional sustainability.

“Finding creativity in your life is a way to recharge your spirit or your energy,” Storr said. “For the young people who are trying to figure out how to exist in the DIY economy and in a very uncertain world — individually and bonding together to make art  — if it’s visual or performing arts, it doesn’t matter; it’s really sustaining.”

Storr also believes in the positive effects of art — the reason arts should be included in education, whether it’s elementary education, college or lifelong learning, which is what “Chautauqua is all about.”

Above all, Storr hopes attendees see that Starr was an example of “determination, spiritual strength and friendship and collaboration.”

“She was so useful and had so much to offer that she made genius friendships,” Storr said. “In fact, she made a friendship in Chautauqua that lasted until the end of her life, and it had real impacts.” 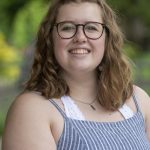