For Derek Thompson, landing a job at The Atlantic was “like winning the lottery. I was so lucky, and remain lucky. The Atlantic is a uniquely wonderful place to be able to think and write about the world.”

Thompson joined The Atlantic in 2009, during the economic recession that ushered in Barack Obama’s time at the White House. That first year, Thompson wrote about government spending and the tanking labor market. Now, 11 years later and with one book behind him, a new catastrophe has focused his reporting — that of COVID-19.

Thompson will highlight his vision of post-pandemic life in his lecture titled “How COVID-19 is Reshaping Our World,” at 10:45 a.m. EDT on Friday, July 10, on the CHQ Assembly Video Platform.

“(Thompson) is doing some remarkable work for The Atlantic right now,” said Vice President and Emily and Richard Smucker Chair for Education Matt Ewalt. “When we originally confirmed the lecture, we were interested in the themes he explores in his book Hit Makers … (but) over the past few months, as the world changed, his work in particular on COVID-19 provided an opportunity for us to pivot and close our week and ask: What does the future look like post-COVID?”

Ewalt says that the shift in lecture content occurred almost simultaneously with the shift that Chautauqua Institution underwent to go online.

“One of our first questions was about weekly themes that we’d confirmed a year and a half ago. We could have set the themes aside,” he said, “but instead, we realized that our current moment brought even more urgency” to these topics. COVID provided a new lens to view the chosen themes, as was the case with Thompson’s lecture.

“Whatever the true cause for our failure (to combat COVID-19),” Thompson wrote in a recent op-ed, “when I look at the twin catastrophes of this annus horribilis, the plague and the police protests, what strikes me is that America’s safekeeping institutions have forgotten how to properly see the threats of the 21st century and move quickly to respond to them.” Thompson’s lecture will envision not only this failure, but a glimpse of what could exist beyond that failing.

Thompson’s writing on economics and pop culture long intrigued Chautauqua Lecture Series planners like Ewalt, and the original plan was for Thompson to discuss these underlying currents. “Yet it’s a testament to his work,” said Ewalt, “that we find ourselves shifting from a lecture that likely would have been lighter, to a really serious examination of the longer ramifications of COVID-19 on our way of life.”

Thompson said he loves “writing about the invisible forces that move the world,” and that economics is “not the only one.”

Ewalt said that the lecture, which closes Week Two’s theme of “Forces Unseen: What Shapes Our Daily Lives,” is a good note to end on.

“(Thompson’s) is not the only lecture that will address COVID,” he said, “but it’s a good way to close the week and look to the future.”

This program is made possible by The Reginald and Elizabeth Lenna Lectureship in Business and Economics.

To see blessings, however they come, set aside preconceived notions about how God will provide, says Blackmon

Laura Philion is spending her first season at Chautauqua as copy editor for the Daily. A rising junior at Sarah Lawrence College, she studies creative writing, literature and art history. When not working, she can be found sewing face masks, reading Elizabeth Bishop and ranting about the paintings of Diego Velásquez (though not all at the same time). 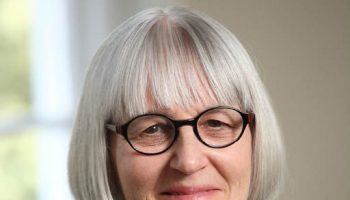