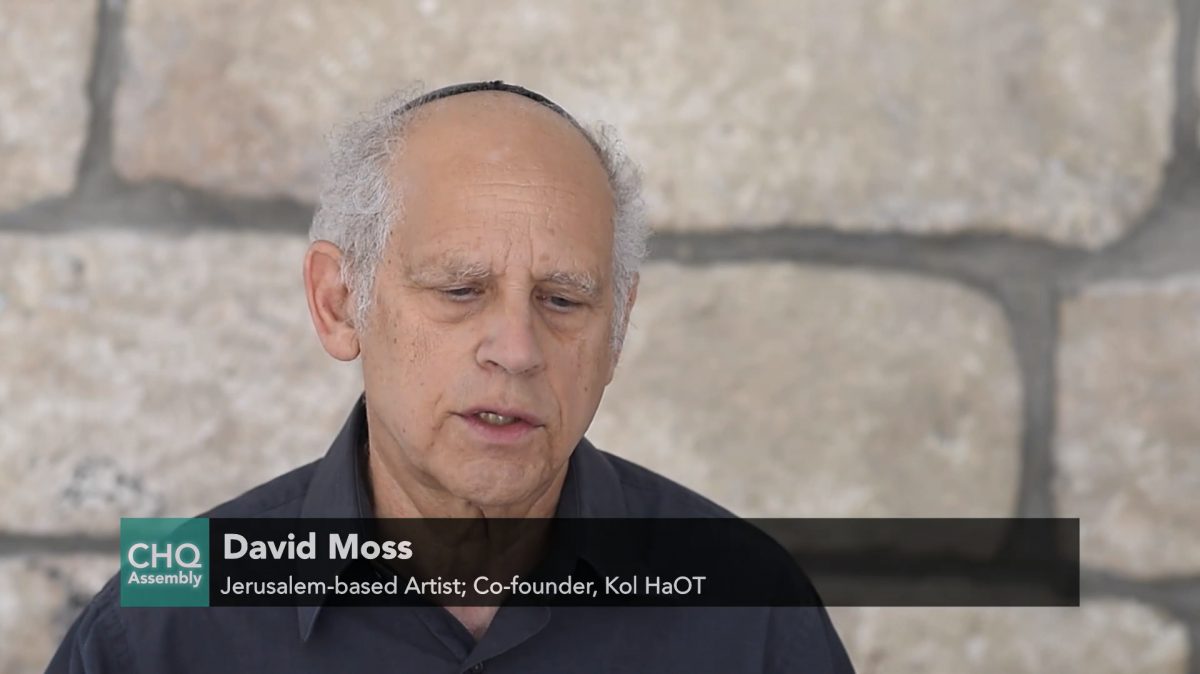 One of the 10 Commandments states, “thou shalt not make yourself any carved idol of anything that is in heaven or the earth.” But from micrography designs to Jerusalem-inspired architecture, Jewish folk artist David Moss makes art without material boundaries, thanks to Judaism’s creative limitations.

The question mark in the title of his lecture is a crucial difference in how Moss talks about his distinctly Jewish work.

My work must therefore somehow convey the sharpness of a Talmudic insight, the creativity of a surprising new Biblical commentary, the imagination of a midrashic fantasy,” Moss said.

In comparison to Christianity, which has identifiable art symbols such as the lily that refer to Christ, “Jewish culture is focused not on the arts of the eye, but the ‘oh’s’ of the ear: literature, music, narrative, poetry, law, legend and commentary,” Moss said. “Yet here I stand before you as a Jewish visual artist.”

His work revolves around the human call for the hiddur mitzvah, the beautification of the Commandments: If you need an object for religious purposes, let it be beautiful.

“My work must therefore somehow convey the sharpness of a Talmudic insight, the creativity of a surprising new Biblical commentary, the imagination of a midrashic fantasy,” Moss said.

His work began when he moved to Israel after college in 1968 — not with formal artistic training, but when a friend wrote out the Hebrew alphabet for him. Moss’ fascination with calligraphy launched a hobby of giving an artful ketubah, or a Jewish marriage contract written in Aramaic, to friends as wedding gifts.

By the time Moss learned about ketubah history, it had essentially become paperwork signed by the couple and a rabbi. The purpose had remained the same, to protect the woman’s rights during marriage and after marriage in the case of divorce or the husband’s death, but the reflection of the beauty of the marriage itself had been stripped.

“Its text is about as romantic as any insurance policy,” Moss said, but the accompanying artistry in past ketubahs was what illustrated the beauty of love and marriage.

In the past, the art form of the ketubah existed across the Jewish diaspora, from Italy, Tunisia and Persia, but had died out over time after the invention of printing.

Interest in Moss’ ketubahs spread through word of mouth, and he eventually started creating them on commission. By now, he has created hundreds of personalized ketubahs across three generations. He created one for his granddaughter’s wedding, and couples who had already been married with a plain ketubah have asked him for a stylized ketubah after the fact, and Moss invented anniversary ketubahs without legal signatures. Hundreds more ketubah artists have sprung up since he began his work.

He uses traditional folk art techniques, but each ketubah is different based on an extensive interview with the couple on their relationship and as individuals.

“I believe they vary so much because it is not about me as an artist, but about the couples themselves,” Moss said

For some, he cuts out Aramaic calligraphy like a detailed paper snowflake. Many feature Jewish micrography, an ancient art form where designs are created with intricate, small Hebrew text. One ketubah tells the story of the creation of man and woman on the sixth day. It was customary in the ketubahs of old to feature or mention Jerusalem, and many of Moss’ do this also. Others are more contemporary.

He often chooses religious quotes specific to the couple. For a couple who collected Chinese art, Moss wrote in Chinese calligraphy the words from Proverbs 18: “He who has found a good wife has found very well.”

When Moss discovered a man who had given his wife of 25 years flowers every week for the Shabbat, Moss calculated how many the husband had given her at that point and illustrated 1,300 flowers into their anniversary ketubah.

Moss’ work is not limited to the ketubah. Through Bet-Alpha Editions, he has published three different illustrated versions of the Book of Haggadah, which is used in retelling the story of Passover, and a book of his ketubah work in Love Letters: A Celebration of Love and Marriage. He created a collage for children that tells the story of the sacrifice of Isaac using 10 different colors and no words, and said that kids as young as 7 have gone through it once and can recite the entire tale from memory afterward. He also created a comic book in Hebrew for teens with translations as footnotes.

Partnering with woodworker Noah Greenberg, Moss ventured into woodwork in order to beautify traditional lecterns and items traditionally stored inside them for daily, weekly and annual holiday rituals. Moss and Greenberg’s design of the Tree of Life lectern and objects inside can be found in Jewish homes, synagogues and museums.

Moss has no boundaries in his work because he started without formal training, so he had no problem transitioning into architecture. He has designed meaningful installations for the United Jewish Appeal Federation building in Manhattan, a thoughtful construction that blended Jewish values with inclusivity in the student building of the UCLA Hillel Foundation in Los Angeles, California, and geographically directed buildings and walkways of the Akiba-Yavneh Academy in Dallas, Texas, that point toward Israel.

In addition to publishing, personalized commissions, and a 70-strong subscription service for annual surprise works for half-market price, his work with Kol HaOt, an organization he co-founded that teaches Jewish traditions and values through art, engages kids and teachers at summer camps and schools.

Summer camps can identify a concern and execute a way to address or even solve it through art. One camp created a Jewish-specific recycling logo with the slogan, “I am the world’s keeper” (based on the phrase, “Am I my brother’s keeper?”). The kids painted the logo on trash cans and designed matching stickers to place above water fountains and toilet paper dispensers around the campus. Another camp created an inclusivity space for anyone who felt sad and needed a hug — regardless of sexual orientation or any other aspect of their identity.

Despite not having formal training himself, Kol HaOt runs an annual program called the Teachers’ Institute in the Arts for teachers in North America. It’s designed to show teachers how to incorporate Jewish lessons into art, and vice versa.

Moss’ career started with a fascination of Hebrew letters. His fascination is rooted in the belief that God created the alphabet before creating the world itself. Despite creating commissions all over the world, the heart of his work remains in lettering and is physically in Jerusalem. He answered Chautauqua’s questions, which the audience could submit to questions.chq.org or on Twitter with #CHQ2020, from his home in a Jerusalem artist community. Maureen Rovegno, Chautauqua Institution’s director of religion, delivered questions.

“Everything you showed us was one surprise after another,” Rovegno said.