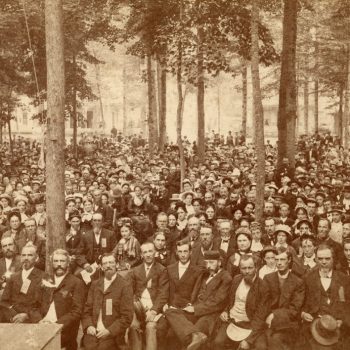 by Julia Arwine on June 27, 2019
share
A Chautauqua Archives image dated 1876 shows a large crowd seated on benches in Miller Park, the location of the first auditorium at Chautauqua. JonSchmitz will shine a light on the history of Chautauqua as

“We tell ourselves stories in order to live,” Joan Didion famously observed in her essay “The White Album.” Chautauqua Institution

President to start season in tradition

On Sunday morning in the Amphitheater, Chautauqua President Thomas M. Becker will mark the beginning of the 2011 Season with the ceremonial three taps of the gavel. While the gavel has come to symbolize the opening and closing of the Chautauqua Season, the history of “Three Taps” is murky at best, according to Chautauqua historian and archivist Jonathan Schmitz.