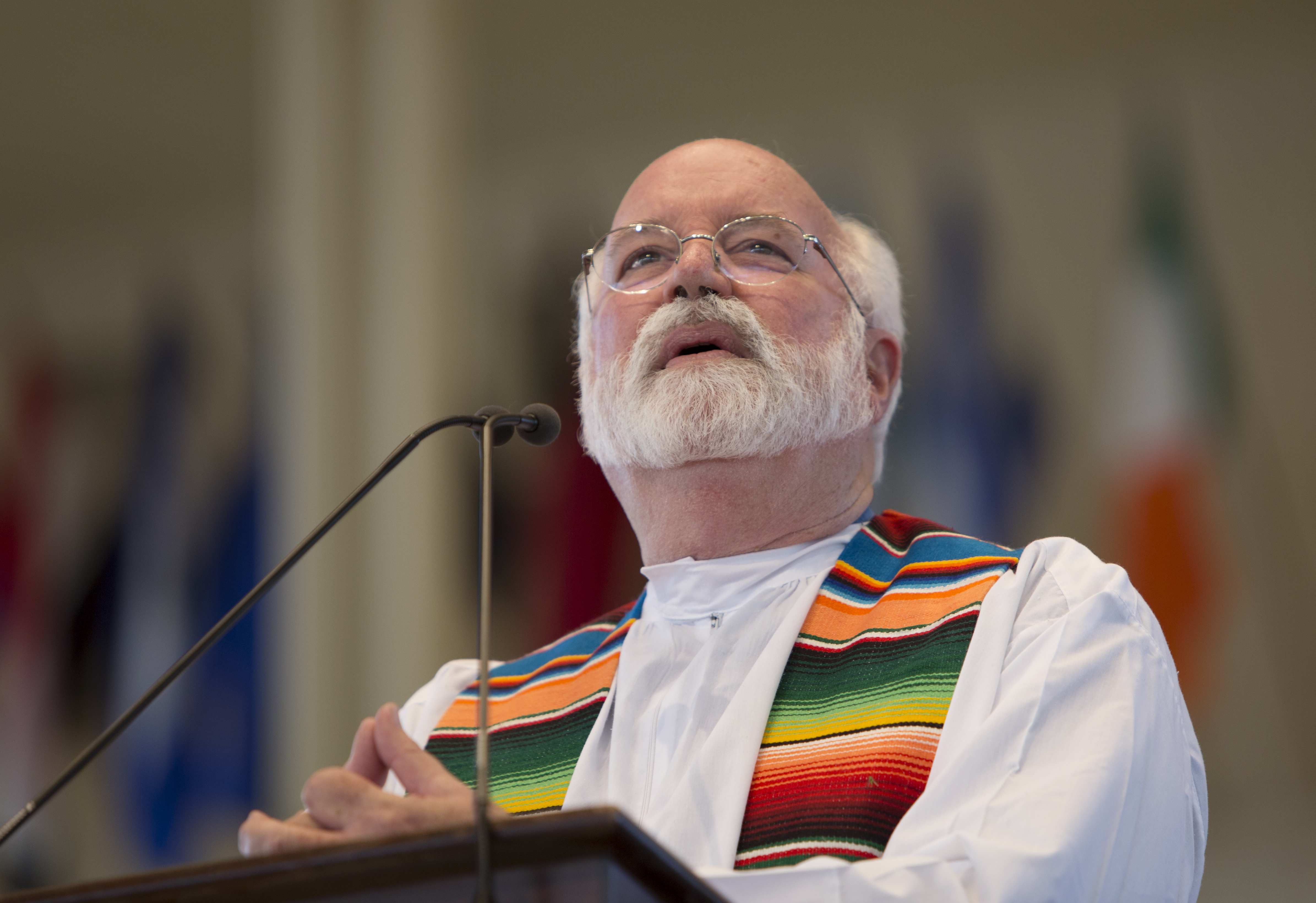 “It was my singular pleasure to know Cesar Chavez,” said Fr. Greg Boyle, S.J., at the 9:15 a.m. Thursday morning worship service. “He was the best listener; he was laser-focused on the person he was talking with. He was never looking for someone more important. As the poet Mary Oliver says, ‘wage peace with your listening.’ A reporter once said to Chavez, ‘The farm workers love you.’ He replied, ‘The feeling’s mutual.’ ”

“The Feeling’s Mutual” was the title of Boyle’s sermon. The Scripture was Mark 7:21-28, Jesus’ encounter with the Syro-Phoenician woman.

Boyle began his sermon with a story about an encounter with a homeboy. Boyle had been away on a speaking trip and came home to find Lupe waiting for him. Lupe said, “While you were gone, my son was born.” “When?” Boyle asked. “On his birthday,” Lupe replied.

“Everybody here is engaged in service,” Boyle said. “Service is where it begins. It is the hallway that gets us to the ballroom of kinship. I am not the great healer; we all are in need of healing. It is God’s dream that we all be one. How do we bridge the distance?”

Dreamer is a homeboy now in his 40s who for many years bounced between getting jobs through Homeboy Industries and vague criminality. One time he wandered back to Homeboy looking for a job. Boyle called Gary, a man who runs a vending machine company, asking for a job. Gary said Dreamer could start the next day. “That is a holy man right there,” Boyle said.

Two weeks later, Dreamer was sitting back in Boyle’s office, and he was afraid that Dreamer had bounced back. But Dreamer pulled out his first paycheck and said, “Damn, G, this paycheck makes me feel proper. My mom is proud and my kids are not ashamed of me. You know who we have to thank for this job?” Boyle acted humble and Dreamer said, “God, of course. You are lucky you are not living in Genesis days or God would have struck down your ass.”

“We both laughed hard. Who is the service provider and who is the recipient?” Boyle said. “It’s mutual. We bridge the distance so that there is no daylight between us. We obliterate the illusion that there is an us and a them.”

Boyle loves that Gospel because Jesus is having a bad day. He is rude, short and not himself, and he is brought to wholeness by the woman who helps him move from a narrow view to a more spacious one. Jesus returned to himself.

“It was a moment of exquisite mutuality where God’s dream came true,” Boyle said.

Boyle was interviewed on PBS and the reporter asked him how it felt to have saved thousands of lives. Boyle said he was not trying to be coy, but he had no idea what the reporter was talking about.

“Saving lives is for the Coast Guard. We can save the world or savor the world. We should not set out to save the world, but to wonder how people are doing,” Boyle said. “E. M. Forster, in Howards End, has a beautiful two-word sentence: ‘Only connect!’ When we connect the decision is made to live in each other’s hearts.”

Boyle took Luis and Joe with him to Washington, D.C., to talk to a congressional committee. They took time to do tourist things, including going to the Holocaust Memorial Museum. Boyle told the two to experience the museum on their own and met them afterward. They were shaken by what they saw. At the entrance of the museum was a desk with a sign, “Holocaust Survivor,” and sitting behind the desk was an 80-year-old man, Jacob. Luis decided to talk to him.

Jacob was a teenager when he was sent to Auschwitz. He watched his sisters murdered in front of him and his parents died there. Luis listened, to wage peace by listening, and at the end of Jacob’s story, gave him his card and invited him to come to Homeboy Industries. He told Jacob he was 27 years old and had spent half his life locked up. Jacob scoffed and told him how easy American jails were compared to Auschwitz. “You had your own room with a mattress; we were stuffed into wooden platforms and if you talked in line you were pulled out and beaten.”

“Yeah, I was pulled out once and beaten until I looked like the Elephant Man and then thrown naked into a cell with a metal plank,” Luis responded. Boyle said he took Luis aside and asked him if he was trying to compare his experience with Jacob’s in Auschwitz. “No, there is no comparison. I wasn’t competing; I was connecting with him,” Luis replied.

“Only connect,” Boyle said. “Then find yourself seized by tenderness that will elevate you to the largeness of God as Jesus was seized by the woman.”

At Homeboy Industries, people who have been in rival gangs have to work together.

“I ask them if they can work with someone from a rival gang and they say, ‘I can work with them but not talk to them,’ ” Boyle said. “It used to bother me, but it is impossible to demonize people they know.”

Youngster came to work at the Homeboy silkscreen business.

“Thousands of people have worked there. It is a quality product at a good price and is UPS’d to Chautauqua — just saying,” Boyle said.

Youngster came in and spoke and shook hands with everyone but Puppet. They both looked at their shoes and it was clear that they had a deep and personal hatred.

“I told them if they could not work together, there were other people who wanted the job,” Boyle said.

One night, Puppet went to a local store and cut through an alley on his way home. He was waylaid by 10 members of a rival gang who beat up and would not stop kicking his head until he was dead. He was taken to the hospital; the doctors put him on a 48-hour flatline watch to know if he was brain dead. Boyle was out of town speaking and flew home to anoint him. Within the first 24 hours, Youngster called Boyle and said, “Is there anything I can do? Give blood? That’s messed up what happened to him. He was not my enemy; he was my friend, we worked together.”

“Does it always happen [like that]? Of course. Any exceptions? No. It should not surprise us that God’s own dream, that we are one, is our own deepest longing for ourselves,” Boyle said. “It turns out it is mutual. We are seized by tenderness and decide to live in each other’s hearts.

“Only connect! Only wonder how people are doing and in that moment we could fall apart or become whole.”

Father James Hubbard presided. Kayla Naron, a scholarship student with the International Order of the King’s Daughters and Sons at Chautauqua, read the Scripture. Naron is from Paris, Texas, where she attends Paris Junior College and studies mathematics and education. The Motet Consort played Antonio Vivaldi’s “Concerto in C Major” for the prelude. The consort consists of flutist Barbara Hois, saxophonist George Wolfe and pianist Joseph Musser. The Motet Choir’s anthem was “When the Trumpet Sounds,” by André Thomas. Jared Jacobsen, organist and coordinator of worship and sacred music, conducted the choir. The Alison and Craig Marthinsen Endowment for the Department of Religion supports this week’s services.