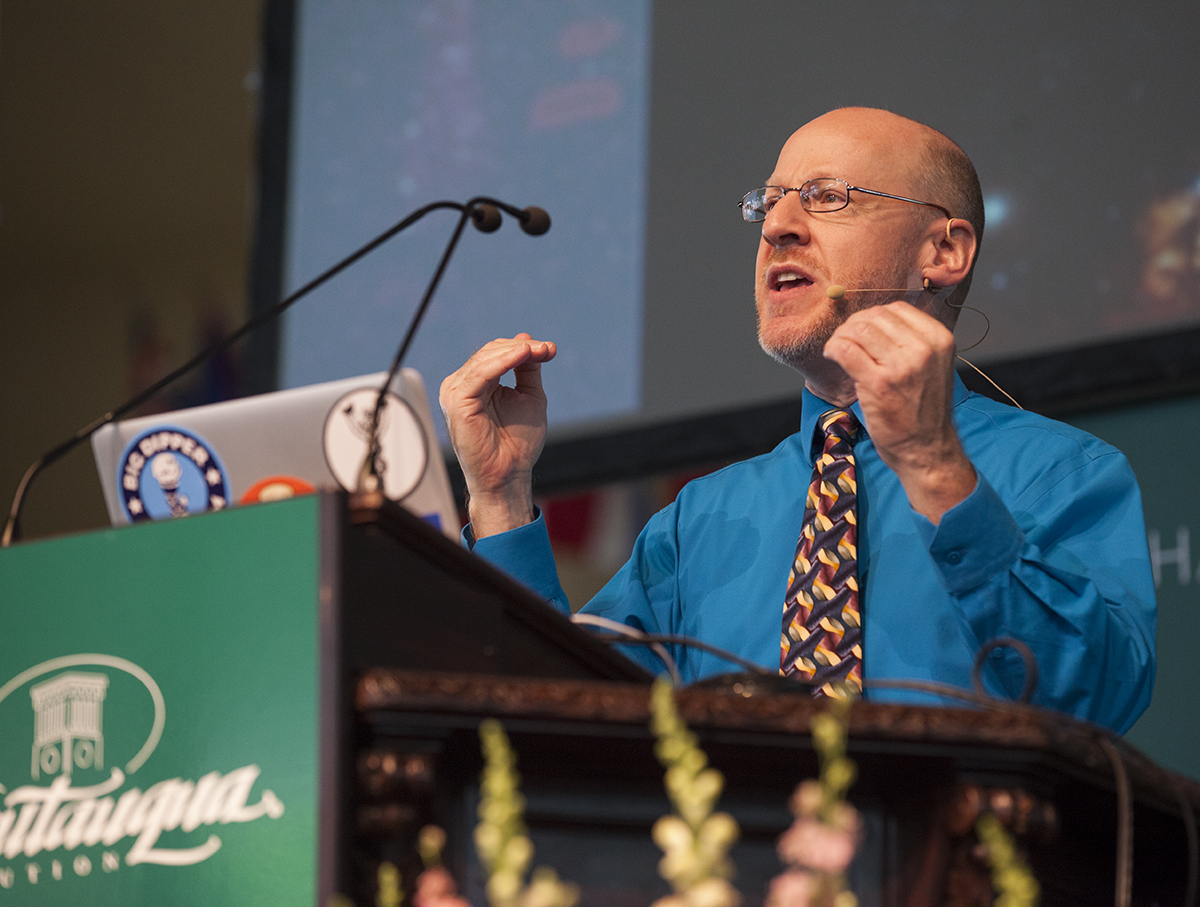 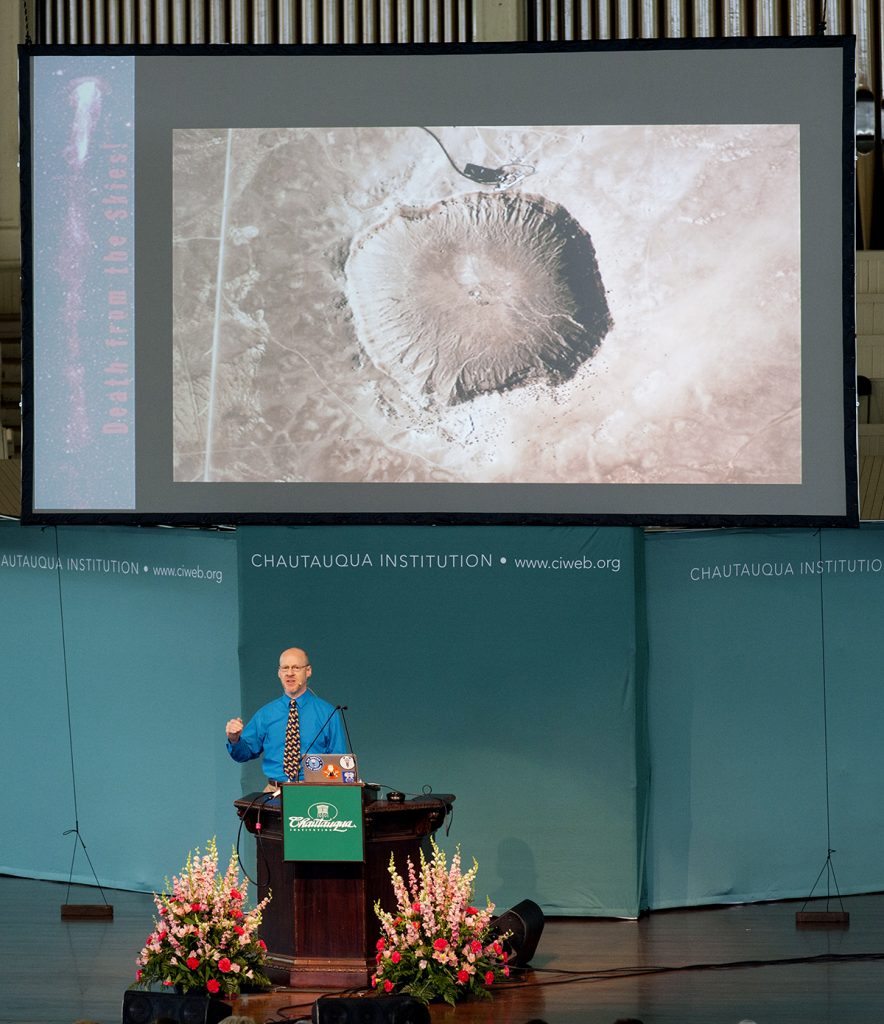 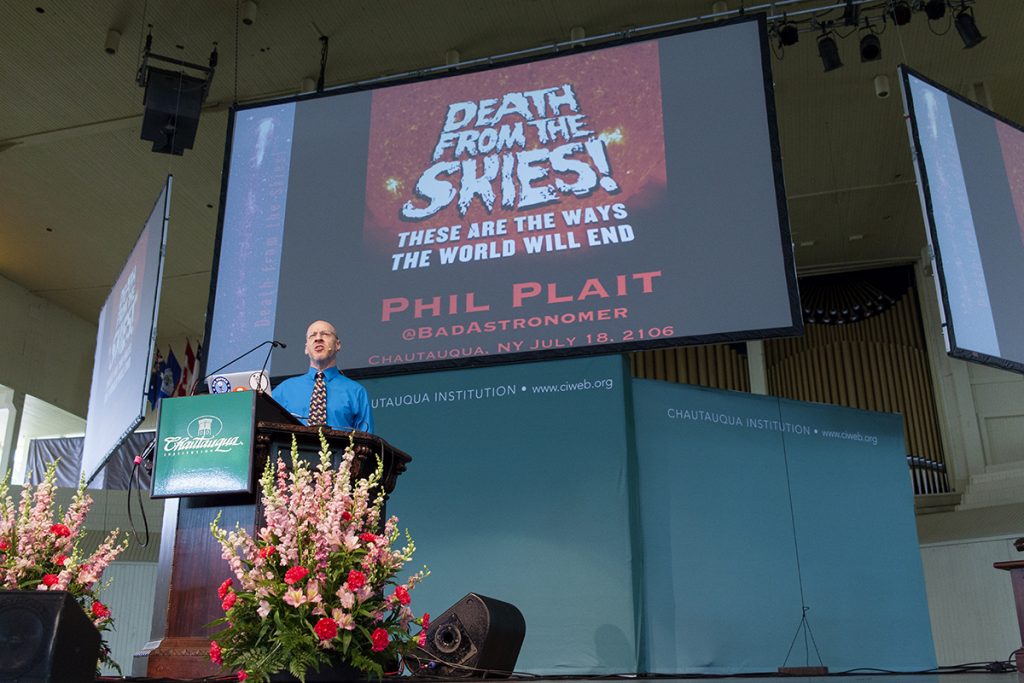 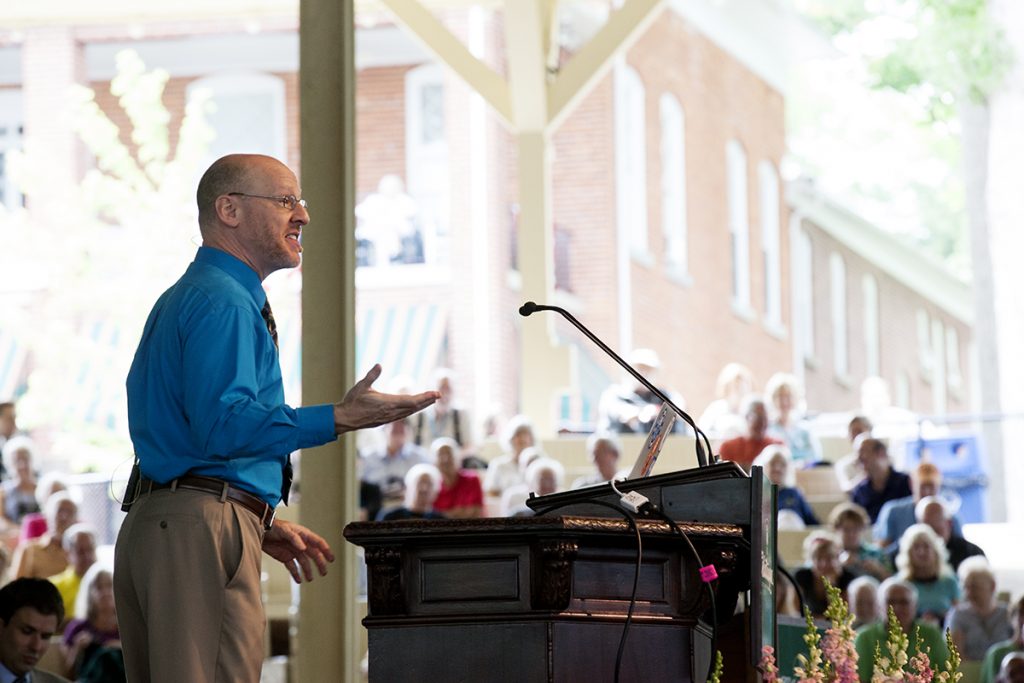 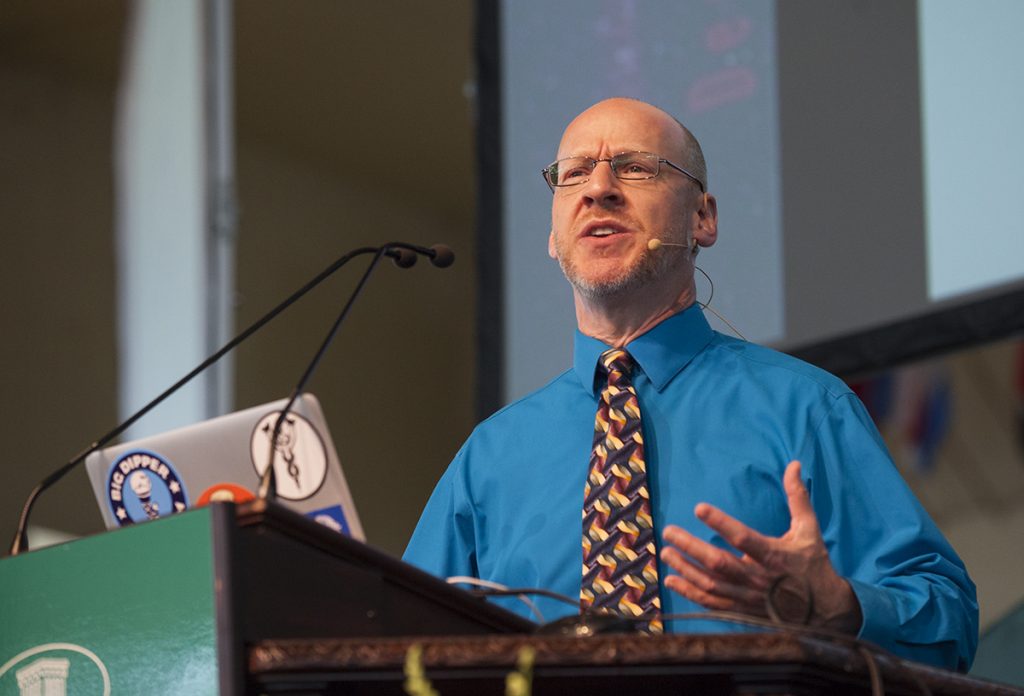 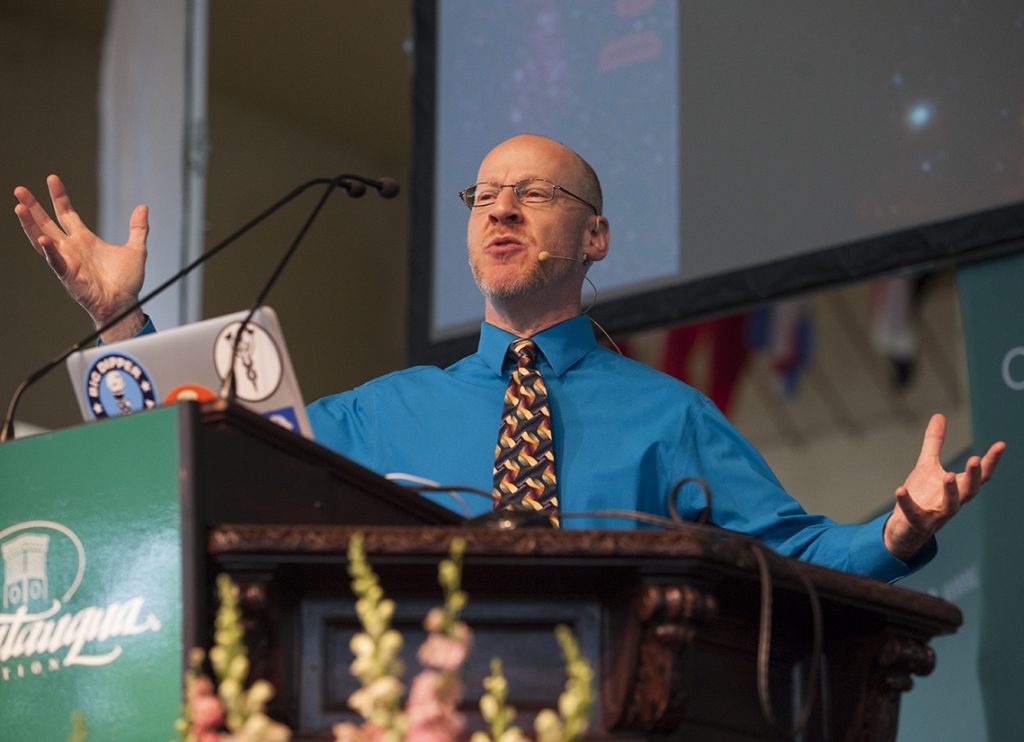 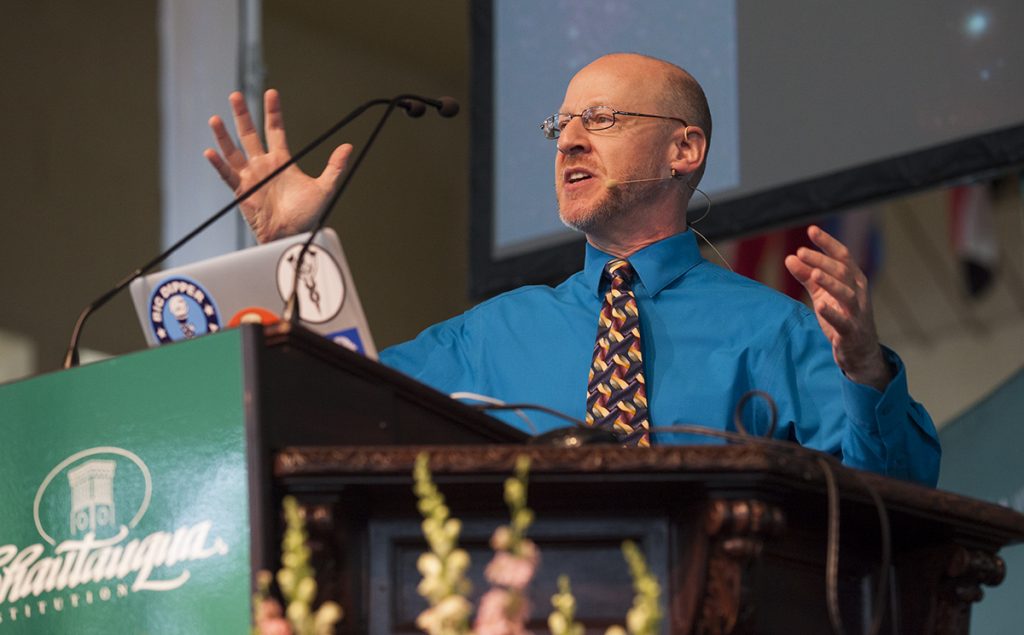 Phil Plait thinks the universe is trying to kill us.

Of those, Plait said, the deadliest threat to Earth looks like a potato hurling through space. Some scientists even refer to that threat — asteroids —  as “space spuds.”

The first speaker in a week titled “Our Search for Another Earth,” Plait devoted the 10:45 a.m. July 18 lecture to how asteroids could simultaneously be the end for Earth and the springboard to another one.

Most asteroids in this solar system concentrate within a thick belt of rocky debris separating Mars from Jupiter, leftovers from the swirling disc of materials that condensed to form the Sun and planets more than 4 billion years ago. That asteroid belt persisted after Jupiter — the largest planet in our solar system — pushed and tugged at the asteroids with its immense gravity, disrupting any coherent motion that could have led to the formation of another planet.

But, Plait said, those aren’t the asteroids Earth should worry about. The real threats are another type, called “near-Earth asteroids” or “potentially hazardous asteroids,” careening toward us on elliptical orbits outside the belt.

As proof, Plait mentioned an object that streaked the sky of Chelyabinsk, Russia, on Feb. 15, 2013. Usually those objects are harmless; about 100 tons of material enter Earth’s atmosphere per day, with the largest piece about the size of a fist.

But the Chelyabinsk meteor was around 50 feet in diameter. Made mostly of rock, the brittle object broke apart and exploded midair with the force of around half a million tons of dynamite.

Plait showed footage of the explosion and its tremendous shock wave that injured more than 1,000 people. Car alarms blared, flurries of shattered glass rained down and the Russian videographers shouted and marveled at the spectacle.

“If you want to learn how to swear in Russian, an asteroid impact is a good lesson,” Plait said.

News reports quickly announced it as the largest meteor event in more than a century. Swap out a few variables — a more metallic asteroid approaching at a steeper angle that actually made impact — and Chelyabinsk could have been reduced to a crater. Measured against smaller explosions, such as nuclear bombs or even the 9/11 terrorists attacks, Plait said an asteroid impact could precipitate the worst catastrophe ever.

“If you can just knock down a building and almost destroy a nation’s economy, imagine what an asteroid impact could do,” Plait said, referring to the World Trade Center. “It’s a very serious threat.”

With that, Plait went on to analyze Hollywood’s fanciful approach to asteroids, both critiquing their solutions and offering his own.

First piece of advice: Don’t blow it up. Movies such as “Deep Impact” and “Armageddon” — both wildly inaccurate, Plait said — popularized the vision of brave Americans sacrificing life and limb to obliterate Texas-sized objects with nuclear firepower. Plait said bombs may succeed in breaking up the larger asteroid, but that just creates countless smaller objects, trading one doomsday for another.

“Would you rather swallow a grenade or a million firecrackers?” Plait said. “Neither.”

Instead, Plait countered Hollywood’s vision with an equally simple one: “You don’t have to blow it up. Hit it.”

Plait said many favor the use of “kinetic impactors” to deflect asteroids. The idea is to hit them with enough force to bump them into an alternate orbit so they miss Earth entirely — no fireworks required.

The only catch is that hitting an asteroid is pretty crude, without any knowing whether the object will veer off or just hit Earth anyway. That’s why the yet-to-be-tested “gravity tug” method first hits the asteroid and then installs a probe in orbit. The opposing gravity of the probe and asteroid will tug at one another, wiggling the asteroid toward an alternate trajectory.

Plait said the technology to test that idea is largely in place, and space agencies need only test it out. If successful, humans could move on from worrying about annihilation to using asteroids as a resource. Plait noted how asteroids contain precious metals such as nickel, platinum and gold that could be mined. Certain asteroids even contain ice that could be used to create rocket fuel and potable water. With the exception of food, Plait said,  asteroids may contain every material necessary for long-term space travel.

“What we’re doing here is turning an existential threat against our entire species into something we can use to stay in space,” he said. “That, to me, is amazing.”

That revelation is part of what Plait called the larger picture of science: a lattice of synergistic discovery, one revelation building upon and expanding the other. Taking a closer look at those small chunks of rock and metal — those asteroids — may lead humanity to a larger chunk worth calling home.