Those four interests are diverse, but Waltemathe found a way to combine them in unique ways throughout his research career.

At 2 p.m. July 21 in the Hall of Philosophy, Waltemathe will give a lecture titled “The Heavens Declare the Glory of God: Religion in a Space-capable and Spacefaring Society.” He will present the history of religion in human space exploration and examine how that could shape its future. 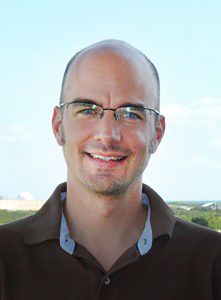 “You can actually look at theology from this very different angle and at space life from the different angle of theology, and be able to combine them and come up with completely new and fascinating ideas,” Waltemathe said.

Waltemathe grew up fascinated by space exploration and star-struck with dreams of becoming an astronaut, even though he was born too late for the Apollo program. But living in Germany, Waltemathe was raised a practicing Christian and developed an interest in religious philosophy.

Torn between his passions for science and religion, Waltemathe originally pursued an undergraduate degree in chemistry until he switched to theology. He completed his doctorate in theology with a dissertation on the use of computer games in religious education.

In March 2015 Waltemathe founded the International Academy for the Study of Gaming and Religion, an organization that furthers the research he began with his dissertation.

But Waltemathe is also interested in the intersection of spirituality and astronomy, specifically in the way the history of spaceflight is connected to contemporary theological and philosophical thought. His anthology Touching the Face of the Cosmos: On the Intersection of Space Travel and Religion, which was co-edited by Paul Levinson, was published in December 2015.

Waltemathe said his personal faith does not impact his scientific research, but his work sometimes impacts his beliefs.

“In the moment I’m thinking about … what religion means for space flight, and on the other hand what finding extraterrestrial life or going to other planets means for religion; I find that affects my faith,” Waltemathe said. “I keep questioning the [faith] I was brought up with and certain dogmas, and trying to really find them or rethink them. I find things in Scripture or tradition and think, ‘That sort of seems right,’ but it needs to be added to or transformed to make way for your understanding of our place in the universe.”

Waltemathe said Germany has a strong religious community that is supportive of his theological research, and some of his atheist friends have called him the “most rational theologian they’ve encountered.” But it’s been more difficult for him to justify his focus on astronomy.

Germany’s space program is smaller than that of the United States; Waltemathe said some people think it’s pointless to discuss the impacts of space exploration, especially regarding ideas such as interstellar travel.

“[To them], we were the guys planning the wedding without even having asked the girl out; … [we’re] the people who are thinking about the ethical, philosophical and theological ramifications of interstellar travel when we can’t even build the rocket ship for it,” Waltemathe said. “But I think that is beside the point. We are not actually thinking about these things as an impending means, but as something that could happen, as something that could further our society so we are ready once these things come to pass.”

Waltemathe thinks discussing those ideas is important, and does his best to initiate a dialogue between the scientific and spiritual communities. He spends some of his spare time teaching courses on model-rocketry at a Christian high school.

“Maybe that’s why I got into space travel and religion, to talk to natural scientists and technology people and try to understand the way the world is better,” Waltemathe said. “I also find that religion has this view that they know the right world view, and from that point of view they can criticize science and technology. … But that sometimes happens without dialogue, and I think [analyzing] spaceflight and religion is a way to enable that dialogue.”