Bass, Newell Look Beyond Tradition For New Understanding of God 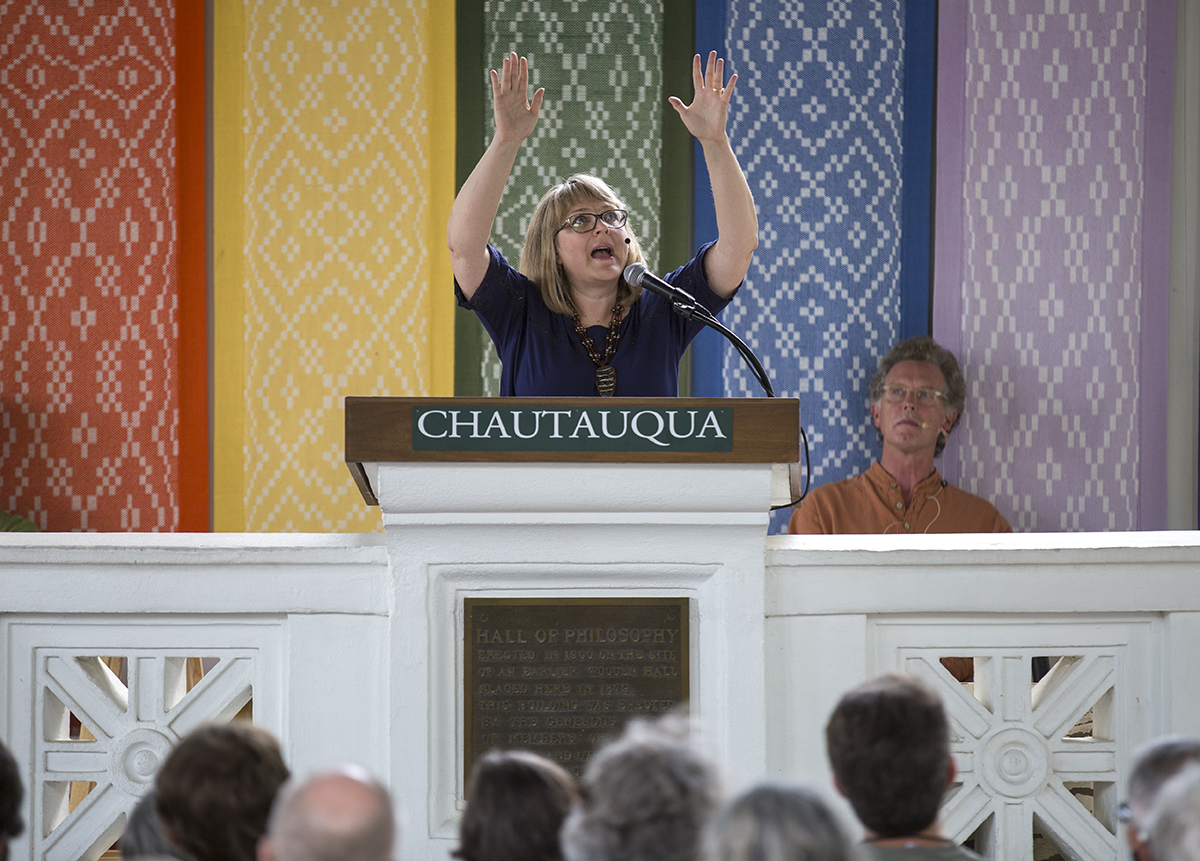 Traditional Christianity is going down in a fiery ball of turd.

At least that’s the metaphor the Rev. John Philip Newell likes to use to describe where the church is heading.

“We are in the midst of a great turd falling,” he said — but it’s not just any turd. It’s a turd from God.

The visual comes from Carl Jung, the founder of analytical philosophy. Late in life, Jung described how at age 12 he had a vision of said turd descending from God’s throne and destroying the cathedral in Laufen, Switzerland. On Friday in the Hall of Philosophy, Newell and religion scholar Diana Butler Bass applied that vision to modern Christianity, describing how the traditional heaven-and-hell church-bound faith is falling out of favor, and how Christians need to be open to the new spirituality growing from the smoldering manure.

Newell’s concerns are well-founded, at least in the Western world. In 2008 and 2009, the European Social Survey found that more than 50 percent of Brits surveyed said they never attended church, third most of the 28 countries polled. Across the rest of Europe, few Catholics said they consider religion “very important” in their lives. And although the United States is generally considered to be more religious than most of Western Europe, American churches have not been immune to the theological malaise. Religious affiliation is down across the board and mainline Protestants, Evangelicals and Catholics are shedding congregants by the millions.

Conversely, religiosity and Christianity is rising across the globe, but that hasn’t stopped websites from Breitbart to The Daily Beast from proclaiming that Christianity is dying in the U.S. And from Week One at Chautauqua, when John Shelby Spong excoriated fundamentalism as a “gentile heresy” driving youth from the church, lecturers have offered ways to save the institution of salvation.

Friday’s argument: for too long, Christianity has focused on heaven and hell, what Bass called vertical theology, and ignored a more Earth-bound, or horizontal, theology.

Bass recalled a conversation she had with a pastor in Kentucky who had picked her up en route to a Disciples of Christ conference. The pastor said his new congregation was nice, but his building was a problem. It sat at the top of a steep hill and was built in the classic skyward steeple of southern church architecture. The building had molded the congregation, the pastor said, teaching them Christianity was only about going up or down after death. The pastor was trying to get them to pay attention to this world through service actions such as planting a garden, but he said he was always fighting the building’s message.

That’s when it occurred to Bass: Christians have built churches such as those since the Middle Ages to point to where they believed God is. She thought back to the United Methodist Church in Chicago. Finished in 1924, it was the tallest building in the world at the time and it advertised that people could pray in the building closest to God.

“Amazing how many churches look like rocket ships,” Bass said. “Walk into door and they’ll launch you right off Earth into heaven.”

That is not just a matter of theology, Bass said. That vertical vision of God, and its attendant image of the Lord as an ancient, white-bearded, white man shapes everything from politics to economics and sociology, Bass said. Its message: whatever’s at the top is best.

“Our global vertical culture is empty inside and it’s crying out for a new vision of soulfulness at its heart,” Bass said.

There are three possible responses to that theological crisis, Newell said: deny there is a collapse, say Christianity just needs a slightly altered version of the old thing or try to figure out what new understanding of the sacred is trying to be born from the ashes of the old. Newell wants to pursue the third route, and he gave four characteristics he has observed of that new emerging spirituality. Not all of it, he said, will come out of traditional Christianity.

The first is a desire to reconnect with the sacredness of nature, Newell said, a view that sees God not as incarnate on Earth but transparent in all of creation. Second is a desire to connect with other religions. Third is a new importance placed on Jesus’ teachings of nonviolence and a rejection of brute force. Finally, he said, people are beginning to reconnect the ancient spiritual and mystical practices of Christianity and other faiths.

Together, they amount to what Bass called a view of God as “radical imminence,” God as simply here.

“People would get mad at me and say you’re robbing God of transcendence,” Bass said. “But being here does not mean that God is not full of wonder and awe, because here extends to there, where God is.”

That new birthing is also a rediscovering of the ancient, Newell said. Most of the old European churches were built atop sacred wells, he said, a vision of radical immanence and God’s presence in nature. If Christians are to rediscover that ancient spirituality and save a religion that is fast-waning in America, Newell said, they cannot labor alone.