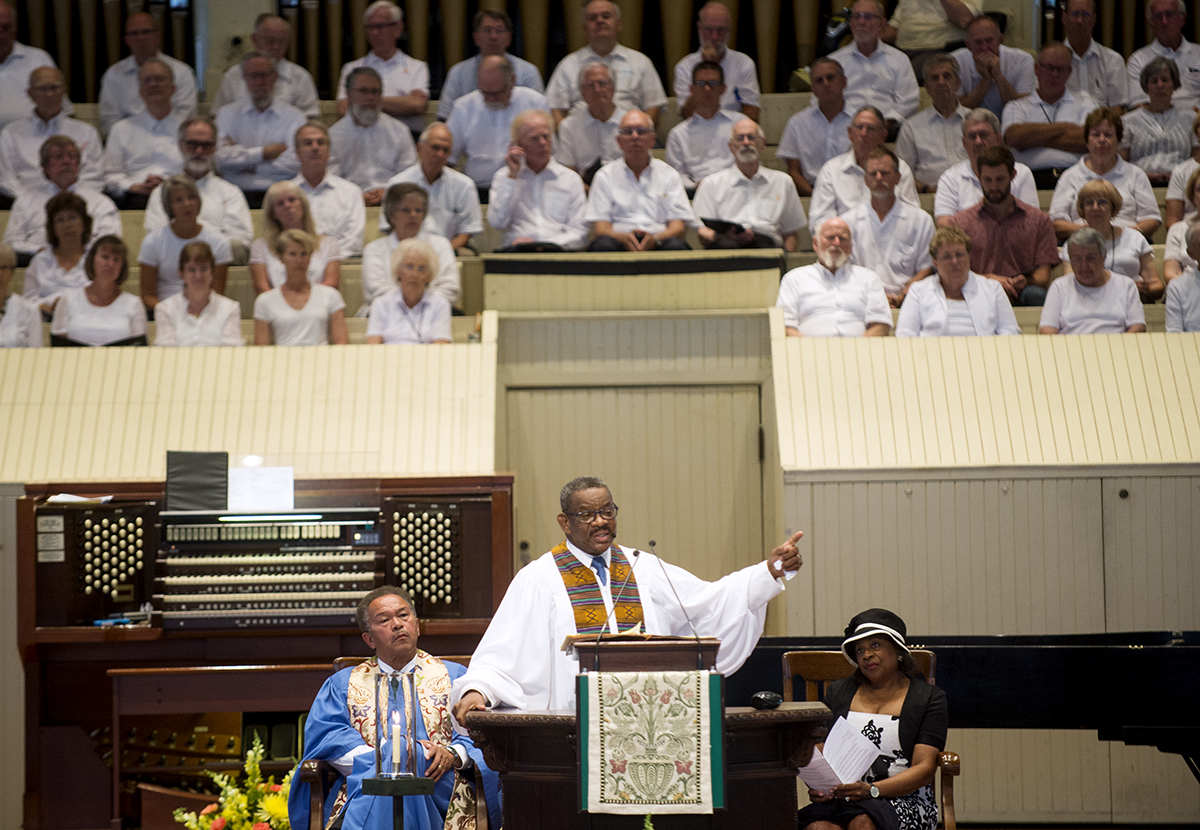 “I saw a sign on a church recently: Sin is Bad, God is Good, Details Inside. I am going to try and share some details,” said the Rev. Dwight D. Andrews at the 10:45 a.m. Sunday morning worship service in the Amphitheater. His sermon title was “The Changing Same,” and the Scripture readings were Psalm 82 and Luke 10: 25-37, the story of the Good Samaritan.

“I learned something new this morning: When I close my eyes I can hear better,” he said. “As a musician, I should know that we hear with more clarity and depth when we remove the distractions and focus on the sound of the music. We can go deeper into the sound.”

He thanked composer Alice Parker for lining out the spiritual “Let Your Little Light Shine,” in the service.

“Because slaves were not allowed to learn to read or write, we were taught the Scripture and music by lining it out,” Andrews said.

His sermon title, “The Changing Same,” came from Amiri Baraka, formerly known as LeRoi Jones, to describe the encounter with black music. Listening to the music helps understand the culture. From the spirituals to the blues, the music reflects the aspirations and concerns of the people. Andrews mentioned “Steal Away to Jesus,” “Didn’t the Lord Deliver Daniel” and “When Will I Get to be Called a Man.” These songs reflect the longing for freedom, justice, equality as well as confronting inequality and prejudice.

“There is a sameness [about the concerns] and changes in the styles of music,” Andrews said. “I remember the days when we were called colored, then negro, then black, then African-American; different names for the same people.”

He said these are troubling, disturbing times.

“Since 9/11 it has been a time of bewilderment for me. There is anger, incivility and fear that drives our conversations,” Andrews said. “Police violence is not new in African-American communities. In the South, the police had to deal with [the aftermath] of lynchings as well as doing the lynching. This history with the police is not new.”

“We all face the same problem, we are divided by race, ethnicity and class, like the Good Samaritan story,” he said. “The Levite and the priest did nothing. Too many of our priests and congregations are crossing over and doing nothing.”

In the story of the Good Samaritan, Jesus was trying to push people out of their boxes.

The same separations still exist today, such as Christians from Christians and Jews from Jews. There are so many labels that they have no meaning.

“Why do we have so many labels? Why are those who follow Jesus so divided? We are divided about the right way to follow Jesus,” Andrews said. “When we are sliced and diced, it inhibits our possibility of being disciples. When we decide who is in and who is out, we set up false criteria that miss the point.”

People are divided and do injury to each other. That is part of the human condition. What is changing are the new ways people can hurt each other, such as cyberbullying.

“Cyberspace provides new ways to communicate, but they don’t necessarily further human communication,” Andres said. “It’s like the couple on a date who sit across from each other texting.”

Andrews said there are new ways to hurt each other, but they aren’t better.

“I bet you are feeling pretty depressed now, but there is a fix: The God we believe in does not change. God is the same today and tomorrow and our bewilderment does not limit God,” he said. “God loves you whether you are up or down; God calls whether you are listening or not. When God is in your life, all you can say is ‘Amen.’ ”

He encouraged the congregation to say amen when they were moved to do so.

“God is good all the time and we have to trust in his grace. God will equip us to be witnesses in the world. It doesn’t mean that the trouble won’t last, but that God is in the midst. Who will be a witness to my Lord?” Andrews said. “The Samaritan was a witness and if the Samaritan can do the right thing, you can do the right thing. Put yourself in a place to be a witness for God. God is always good and loving. Isn’t that a good word?”

The Rev. Robert M. Franklin Jr., director of the Department of Religion, presided. Dr. Cheryl Goffney Franklin, his wife and best friend and an obstetrician and gynecologist with La Femme Care in Atlanta, read the Scriptures. Alice Parker, composer and choral arranger and longtime co-worker with Robert Shaw, was honored during the service. She led the Chautauqua Choir in “I Will Go To Jesus,” a shape note hymn, and then lined out the spiritual “Let Your Little Light Shine,” with the congregation. The second hymn, “As the Seed That Cleaves a Stone,” was composed by Parker for Chautauqua’s 125th anniversary season in 1999 with words by Thomas H. Troeger. The Chautauqua Choir sang the spiritual “Steal Away,” in an arrangement by Howard Helvey. George Wolfe accompanied the choir on the saxophone obbligato. The offertory anthem was “As a Chalice Cast of God,” by K. Lee Scott and words by Troeger. This anthem was commissioned by the Chautauqua Choir to honor Jared Jacobsen, organist and coordinator of worship and sacred music, on his appointment as director of the choir in 2003. The benediction, “A Universal Blessing,” was composed by Parker. The organ postlude was “Toccata for Grand Organ,” Op. 39 by Camil van Hulse. The Harold F. Reed Memorial Chaplaincy and the Daney-Holden Chaplaincy Fund provide support for this week’s services.