Morning Worship Column: We Have Permission to Share our Discontent with God 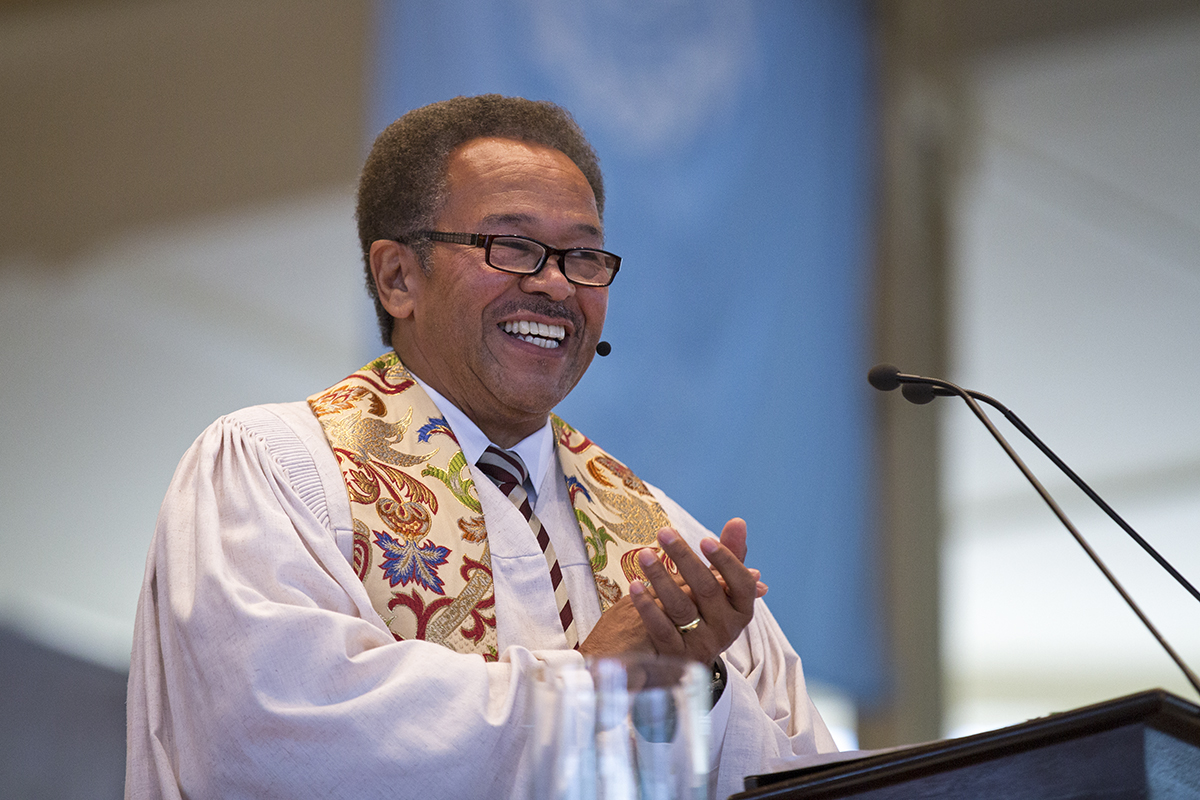 “Jesus gave us permission to be as close to God as he was, and we have his permission to share our indignation about suffering, we have permission to argue with God,” said the Rev. Robert M. Franklin Jr. at the 10:45 a.m. Sunday morning worship service in the Amphitheater. His sermon title was “The Vocation of Argument” and the Scripture readings were Psalm 22:1-5 and Psalm 23:1-6.

Franklin was preaching in the place of the Rev. John Philip Newell, who was prevented by weather from getting to Chautauqua for the service. Franklin also presided at the service.

Franklin recalled the pain of July 2014 when the bright, energetic and charismatic head of the grounds crew, Ryan Kiblin, and her baby, Emma Lee, died. Franklin said that as he talked with her family and colleagues he urged them to read Psalm 22 and then Psalm 23.

‘We are familiar with Psalm 23, the shepherd, the still waters, the green pastures, the relief it brings in a time of tragedy,” he said. “But before we get there we have to pass through the anguish of abandonment in Psalm 22.”

The Biblical God, he said, takes a keen interest in human affairs and knows us and loves us.

“We have permission to declare our discontent,” Franklin said, citing Abraham talking with God in Genesis 18.

Abraham asked if God was going to destroy the righteous along with the wicked in Sodom and argued with God to save the city even if there were only 10 righteous people in residence.

Moses argued with God to turn away his wrath over the worship of the Golden Calf. Moses asked God if he had brought them out of slavery in Egypt only to kill them in the wilderness. Did God remember his promise to Abraham, Isaac and Israel [Jacob] to make their descendents like the stars? God changed his mind.

Levi Yitzchak, a Hasidic rabbi of the 18th century, took God to task for the suffering of the Jewish people. He brought a lawsuit against God, “a din-toyre mit Got.” He told God that he would not waiver until there was an end to exile.

“He put God on notice,” Franklin said. “To articulate such ideas is an important part of Judaism, to maintain faith in a world of suffering.”

Jesus, on the cross, quoted Psalm 22. Howard Thurman said in his book Jesus and the Disinherited there was a radical tension between good and evil and evil does not have the last word.

“Thurman said we are working against what destroys and lays waste. I hope Thurman was right,” Franklin said. “We are working against that which murders police officers, that turns Bible study into a morgue, a gas balloon ride becomes an inferno and the slow death for too many from crushing poverty.”

We have become a more diverse nation, but we have blueprints to help guide us, he said. Martin Luther King Jr. left us the blueprint of the Beloved Community and Abraham Heschel called  on people to march to defeat hate and oppression. Franklin reminded the congregation of writer Alice Walker’s book Hard Times Require Furious Dancing. He often quotes her in the call to confession on Sundays. She wrote, “How long can you hold onto your hate,” calling it so slippery that “you could drop it only yourself.” There is no graceful way to carry hate.

“What churches, mosques, synagogues and temples need is more poets to upset the equilibrium. That is the reason we gather at Chautauqua. We gather to be brutally honest with ourselves and with God,” Franklin said. “We explore what it means to be human in a world of chaos. We have to do the heavy spiritual lifting and ask what is the nature of God, of evil and their interaction with each other. What is the good life and the good community?”

Psalm 22 and 23 are at the heart of this challenge.

“Why have you forsaken me? I feel that way a little bit about John Philip Newell,” he said to laughter. “The Lord is my shepherd. There is a tension. When we gather at Chautauqua we have an agenda, but it is not a political agenda or a theological agenda. We consider why we are here and maybe our lives will make a greater difference to help others to come alive as we have. We are here to do sacred work, to heal the world.”

From the terror of ISIS to the execution of innocent people by police, “we can and should raise our voice and let God know our discontent. It only through argument and struggle that we find the possibility of new life,” Franklin said. “We have to expand our boundaries of spirituality; have more honesty with God.”

As the old hymn said, we have to have a little talk with Jesus.

“Jesus does not mind a little sweet talk but most little talks with Jesus are filled with platitudes that bore God to somnolescence. Where are the blues notes, the lamentations?” he said. “Beware of a polite ‘Downton Abbey’ spirituality that tamps down the volcano in the soul.”

He urged the congregation to have a little talk with Jesus.

“Tell God how you feel when bad things happen to good people. One day you might look up and see that God has changed his mind,” Franklin said. “You will be strong in the broken places. The good news in Chautauqua today is that you are not alone. Jesus said ‘I am with you always, even to the end of the age.’ Jesus never leaves us alone.”

Norma Rees, one of the facilitators of the Introduction to the Labyrinth Walk at Chautauqua, read the Scripture. The Responsorial Psalm was 91 “Be With Me, Lord,” by Marty Haugen. The Anthem was “Be Thou a Smooth Way,” by Ralph M. Johnson. The Offertory Anthem was “How Excellent Thy Name,” by Chautauquan Howard Hanson. The organ postlude was Toccata in F major, BWV 540 by Johann Sebastian Bach.