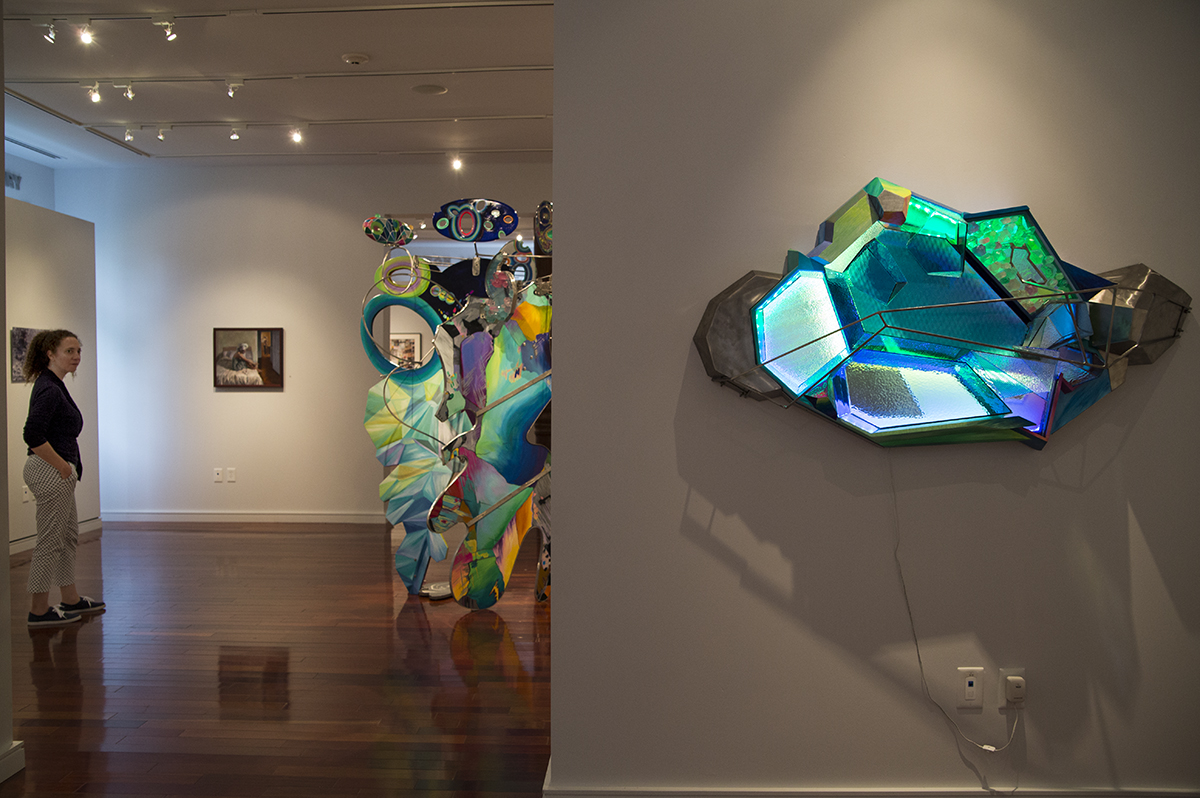 Erika Diamond, assistant director of galleries, admires “Solar Fusion," a piece created by Alison Helm, on Monday, June 19, 2017. The sculpture is one of 60 pieces displayed in the 60th Chautauqua Annual Exhibition for Contemporary Art at the Fowler-Kellogg Art Center. ERIN CLARK / STAFF PHOTOGRAPHER

All four art exhibits opening at Chautauqua Institution this Sunday are unique, but only one can claim to be the biggest.

The 60th Chautauqua Annual Exhibition of Contemporary Art: 60 Works Celebrating 60 Years holds its opening reception at 3 p.m Sunday in Fowler-Kellogg Art Center. With 60 pieces, this year’s show is twice the size of any of the previous annual contemporary shows.

Not only is it the largest of the annual contemporary exhibitions, it’s also the first that the three Visual Arts at Chautauqua Institution directors have juried together.

Artistic Director Don Kimes, Managing Director Lois Jubeck and Susan and Jack Turben Director of Galleries Judy Barie, who have worked together at VACI for 10 years, selected the pieces that make up the exhibit. When choosing from the more than 400 artworks submitted, they looked for quality, but also a combination of pieces that would build a cohesive show.

“I didn’t just choose works that I liked,” Barie said. “I tried to choose pieces of art that work together.”

The jurors did not aim to provide a comprehensive survey of contemporary art, but rather to explore a question Kimes posed: “What are people doing now?” All of the pieces in the contemporary show were created within the last three years.

While the jurors had no theme in mind at the outset, they saw a common thread appear prominently after the fact.

Aside from the unplanned color scheme, the show is eclectic, bringing together a variety of mediums, artists and perspectives.

Cornelia Dohse-Peck, a Buffalo-based artist showing two mixed media wall hangings, often focuses on political events in her work. Her piece “The 45th Oath” from her “Pack Rat Mandala” series is made of a bike wheel, caution tape and printed-out words from the American presidential oath. She built the piece in just two days, finishing on Jan. 20, 2017 – Inauguration Day.

“Hopefully when you read the text, you get it,” she said. “I really like to make the viewers work a little bit, to come prepared to think. I don’t want them to glance and then walk on. I really want them to get something meaningful.”

Just as the artists vary in their preferred medium, each has their own objective. Unlike Dohse-Peck, Susan Tercek wants viewers to create their own interpretations of her work. Tercek is a Cincinnati-based artist with an abstract acrylic painting, titled “#458,” in the show. She purposefully refrains from titling her pieces in order to avoid influencing the viewer’s perception.

“For me, it’s almost like a canvas for them. They can look at it and go where they want with it,” she said. “I don’t want to restrict what they see.”

In addition to the color blue, another thread appeared after the exhibition pieces had been chosen. Though the jurors used a blind submission process, several artists who had participated in VACI’s School of Art summer program had their works selected.

Taro Takizawa, a recent M.F.A. graduate of Syracuse University’s printmaking program, submitted a silkscreen print titled “Lost in the Dusk.” He remembers seeing the annual contemporary art exhibit two years ago, when he first came to the Institution in summer 2015 as a student in the School of Art.

Takizawa sees being part of the 60th show as an opportunity to show his work in a space that matters. Artists who come here, he said, are “either already really good and well known, or become popular in the future.”

“I’m absolutely flattered to be selected,” he said. “They put up a really good show.”

Visitors will have to decide for themselves, but Jubeck said they should expect to see a fresh show – and also expect to be challenged.